After I published this article yesterday on the bankruptcy of the debt settlement law firm Johnson Law Group in Nevada it was pointed out to me that there was more to tell from the supporting schedules attached. – Source. And the tip was correct.

The court documents revel how much money was disbursed by the Johnson Law Group in the 90 days prior to their involuntary bankruptcy filing. What you will see is how much money was paid out in primarily marketing costs rather than disbursements made to actual creditors of clients.

As you can see in my low budget spreadsheet snapshot below, it appears the agents and marketers of the program received the vast amount of money disbursed that was not out of the client trust account. Debtwave alone received over $6.4 million. And a company, CBDC, received over a million. CBDC I believe is actually Consumer and Business Debt Counseling Services. See this article for how CBDC and JLG fit together. It’s interesting. 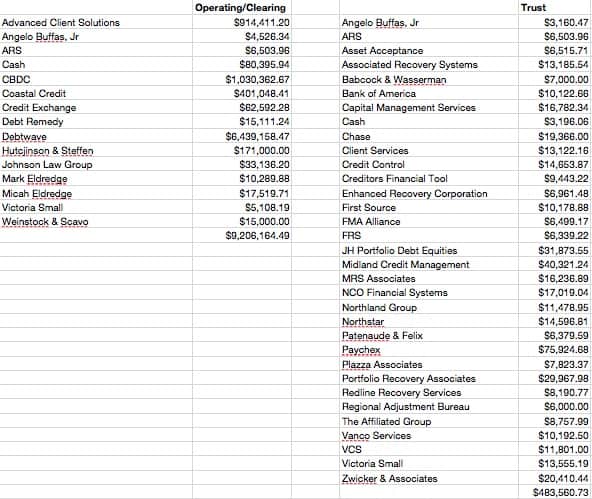 From looking at the details in the documents $9,206,164 of the money consumers paid into the law firm to handle their debts was mostly disbursed to operating costs while only $483,560 was disbursed to creditors of clients in the same time. Put into context, less than 5% of the money collected from consumers was actually used to pay their creditors.

One argument that might be made is the massive disbursements to agents and obligations was the result of new clients recently entering the program and these were the front loaded fees that were being paid out to the marketers. That is probably a factual statement but certainly does not change the fact that while the consumer was sold a attorney based debt settlement program that would help to repay the creditors of the consumer, 95% of disbursements were not made to creditors.

See also  Debtcor Sent Me to Johnson Law Group That Was Serviced by ESS. - Keith

This look into the disbursements of the Johnson Law Group seems to be great evidence why attorney front loaded or advanced fee models are not fair to consumers. And while the FTC telemarketing sales rules that go into effect on October 27, 2010 are set to ban these types of advance fees the one group that claims they are exempt from the regulation are law firms and attorneys.