A tipster (send in your tips here) sent me an email today letting me know that The Debt Answer/ABC Debt Relief have now started selling debt relief services under the name of World Law Plan.

ABC Debt Relief is a company I have written about before. You can find previous articles here. With the new telemarketing sales rules going into effect today it appears ABC Debt Relief has switched from selling the debt settlement services of Lloyd Ward, a Dallas attorney, to now promoting themselves as World Law Plan at the same business address of 12655 N. Central Expwy Suite 800, Dallas, Texas 75243 they have used before.

What’s ironic is that it appears the World Law Plan site is using the same settlement examples and testimonials that ABC Debt Relief used to sell services for other providers.

In fact the “Real” customer testimonial graphic says it is for Lloyd Ward. Word back from Ward tells me he says he has nothing to do with World Law Plan. 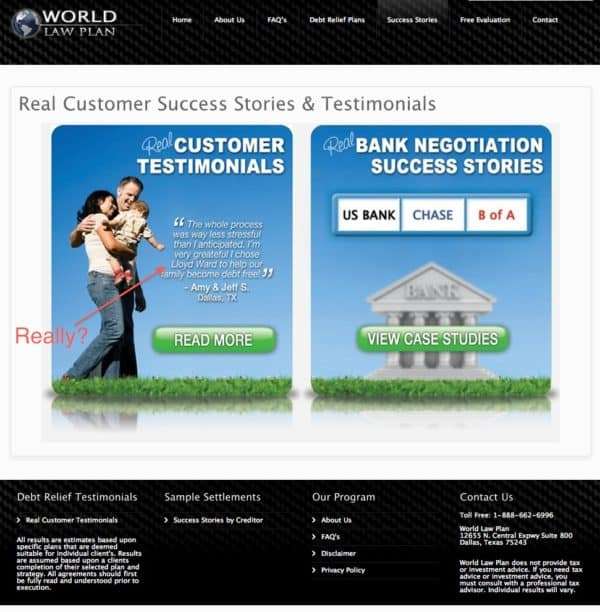 And here is a settlement letter they are using that says it was for another debt settlement lawyer they promoted, Simon & Bocksh. – Source

On the World Debt Plan site they say this about that settlement letter:

Bank of America’s books showed an outstanding balance of $7,296.47 for this client. We immediately stepped as an advocate for the client, handling all exchanges with Bank of America on the client’s behalf. The client enrolled in our Debt Negotiation plan to begin accruing money as soon as possible. We were able to achieve a significant reduction in the client’s account balance during our negotiations with Bank of America. Ultimately, the client became responsible for a renegotiated balance of only $1,100.00, payable in intervals—totaling only 15% of their original balance. – Source

The odd thing is it’s not even their client and for a completely different firm and happened before World Law Plan even existed. 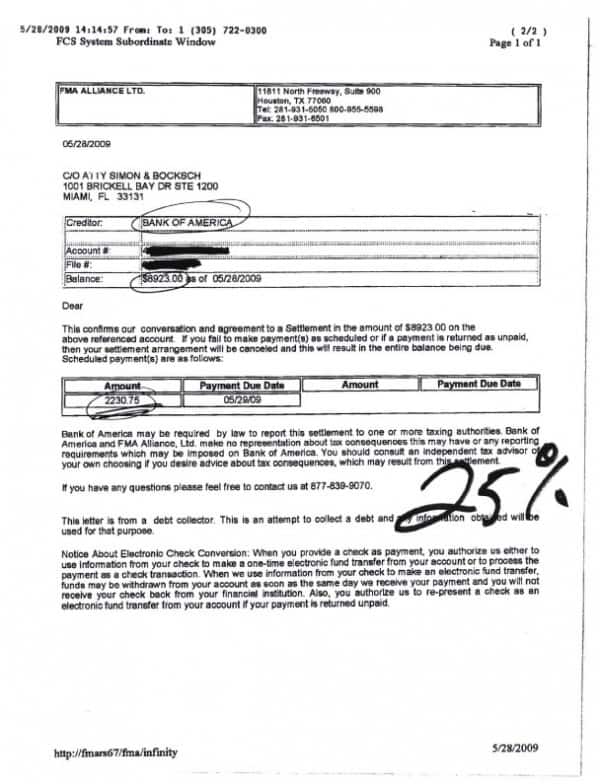 Even more interesting for me is that I recognize the video that tops their site as the same one ABC Debt Relief used to market services for Lloyd Ward and Simon & Bocksch. I guess everything got recycled.

And then there is this statement on the site.

When should I consider bankruptcy?

Bankruptcy is very serious and will stay with you for the rest of your life. Nothing is as damaging as Bankruptcy and the negative impact on your credit can be overwhelming. Bankruptcy is for consumers who are in serious financial hardship and for those that generally cannot even save minimal amounts to settle their obligations.

Nothing is as damaging as bankruptcy? Well what about the problems surrounding poor debt settlement like delinquent accounts, aggressive collections, getting sued, negative credit for seven years?

Even the site says:

In our Debt Settlement Plan, creditors can report your accounts as late, which will have a damaging effect on your credit score. Once a mutually agreeable renegotiation is reached with each creditor, the creditors will mark the account as “Settled with a zero balance “… “Paid “paid satisfied”…..”Paid settled”…Or something similar.

What they fail to mention is that the amount of debt forgiven can also appear as a black mark on the credit report for seven years.

And as I depart this article I thought it would be interesting to see when the company World Law Plan was formed in Texas. According to the State of Texas there is no company registered under the name World Law Plan.

Even the Texas Bar Association has no record of a law firm called World Law Plan. 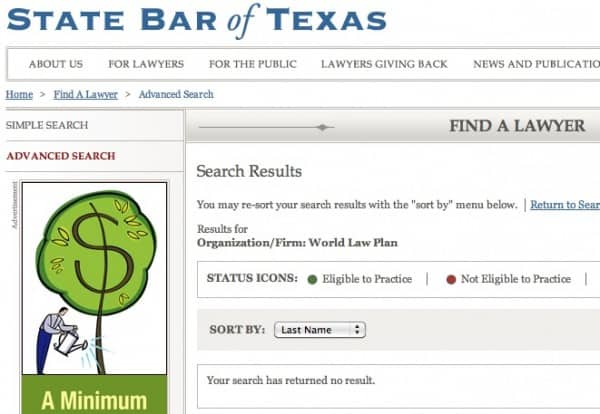