A new study out by The Pew Research Center shows a correlation between a decline in the economy and birth rates. Apparently since 2008 there has been a sharp decline in not only our economy but also fertility rates in the United States. While the world population is rising steadily and the UN has reported that on or around October 31, 2011 the seventh billion person will be born (Source) the United States still continues to see a decline in births with the economy in the state it is now.

A couple that I know personally just had their first baby eight months ago. When asked if they were going to have another anytime soon their response was, with a heavy sigh, simply, “it’s just too expensive right now.” Obviously, many others in the United States have this same mindset and in a strange way the crappy economy has lead to a mighty effective birth control (please note: this is not a fact, if you have unprotected sex there is a chance you will still get pregnant regardless of the economy’s status). 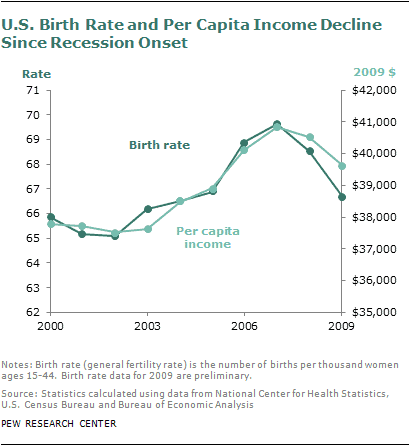 What was found was that, “in 48 of 51 states (a number that includes the District of Columbia), fertility declines occurred within one to two years of the start of economic declines (as indicated by the percent change in personal income per capita, and the percent change in the employment rate). This does not conclusively prove that the economic changes led to fertility changes. However, the timing is consistent with the time it might take people to act upon fertility decisions.”

According to The Pew Research Center they have also found evidence of, “an association between economic hard times and fertility declines by race and ethnicity. Hispanics, whose employment levels and household wealth were particularly hard hit by the Great Recession, have experienced the largest fertility declines of the nation’s three major racial and ethnic groups. Conversely, whites have experienced smaller economic hardships, and smaller declines in fertility. From 2008 to 2009, birth rates dropped by 5.9% among Hispanic women, while birth rates dropped 2.4% among black women and 1.6% among white women” – Source.

Perhaps the babies that are born after 2008 until the end of this economic slump will be known as the Recession Babies. Or Baby Slump-ers (instead of Boomers). Hmmm… the possibilities are endless.