In an effort to help people better understand what issues create a problem for the IRS in approving a non-profit credit counseling organization I decided to do a bit of research into recent rejection letters issued and made public.

I owe a big hat tip to the friendly people at the IRS for their help in this article.

The underlying issues this denial letter brings up plague many nonprofit credit counseling groups. At some point people lost track that nonprofit 501(c)(3) groups are educational and charitable organizations that are supposed to serve a charitable class such as low-income individuals.

In this case the organization seems to have been more beholden to creditors to maintain funding than to the charitable class of consumers they were supposed to serve.

This particular organization is said to have waived fees or provide below cost services DMP service to consumers “if a DMP was desirable to creditors.” The audit of the organization also identified material from a creditor that tied DMP performance to funding.

The nonprofit credit counseling group was also providing DMP services to “any caller accepted by the creditors,” rather than limiting services to a charitable class of consumers. You will also see how employee compensation and performance were tied to DMP enrollment as well.

The IRS notes yet again that “Enrolling clients on a DMP is not an educational activity.”

As part of its investigation the IRS found that “Its counseling activity is nothing more than an interviewing activity; XXXX screens consumers to market and sell DMP services.”

The IRS felt many of the change the credit counseling group implemented were:

A direct result of catering to the requirements of credit card companies and the amount of fair share they will pay for servicing their clients. The credit card companies are looking for credit counseling organizations that are efficient in transferring funds and retaining clients on DMPs including size of payment and FICO risk of client which will enrich both organizations.

The audit also determined the the nonprofit group engaged in advertising in order to generate new clients that created revenue for the organization and the credit card companies.

You can read the full IRS document, here.

Details From the IRS Documentation

While the identity of the organization is hidden in the IRS documentation I was able to locate advertisements that were similar and identified the organization. – Source

This organization had been operating for a long period of time. The IRS adverse determination letter issued on June 29, 2011 says that effective January 1, 2001 the organization is not considered to qualify under 501(c)(3).

The reason given is “You operate substantially for non-exempt purposes. You are not an organization which operates exclusively for one or more of the exempt purposes which would qualify it as an exempt organization.”

What makes this particular example very interesting is the detail the IRS provided in its explanation of items.

Even though this group was originally grated a 501(c)(3) determination letter and latter its tax status was confirmed, a detailed audit of the non-profit credit counseling operation identified the following issues. 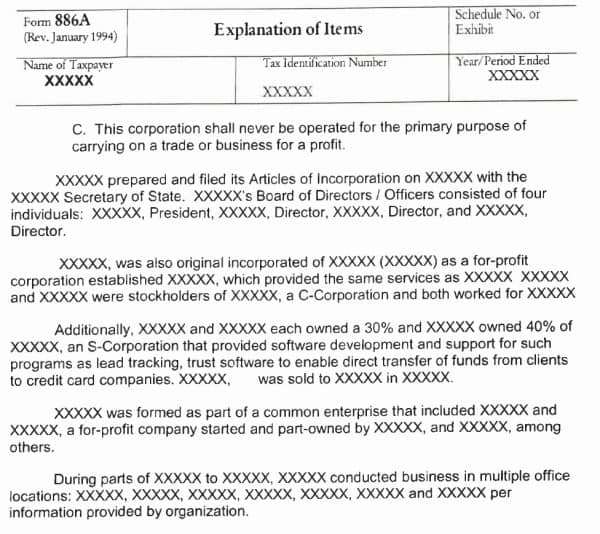 Two members of the nonprofit also owed significant interest in another company that provided software development and support for lead tracking, and trust software to transfer client funds to credit card companies. 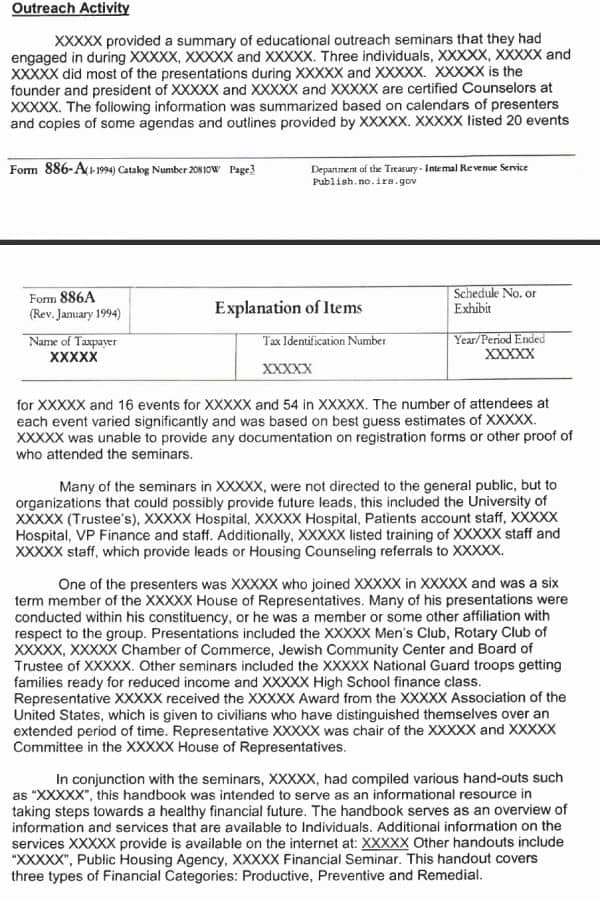 Outreach activities proved to be problematic as well. The organization could not produce any documentation on registration forms or proof who attended the seminars.

The IRS determined that many of the seminars were not directed to the general public but to groups that could provide future leads.

While many of the presentations listed were beneficial and helpful the lack of documentation on attendance was not helpful at all. 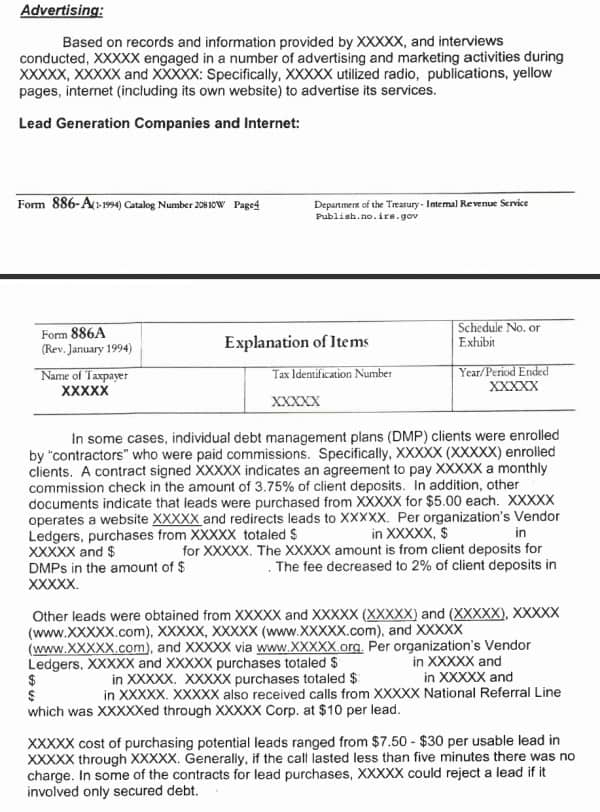 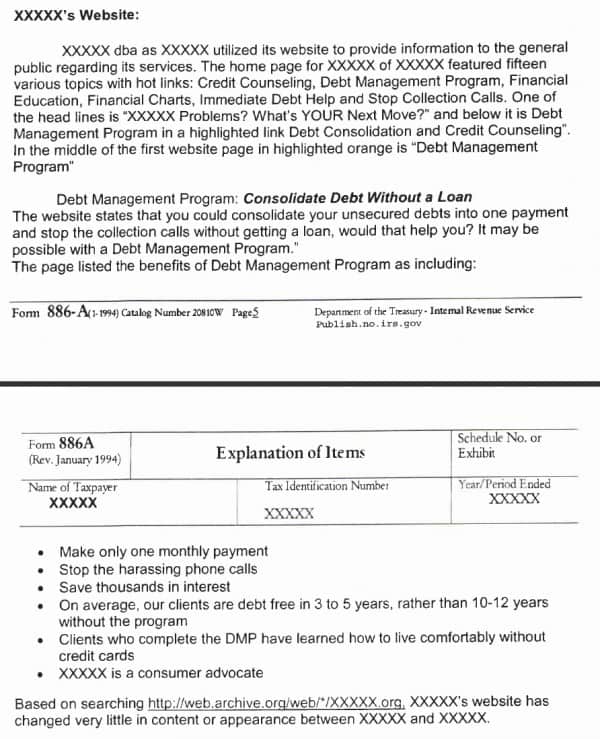 The IRS specifically noted the claims made about the nonprofits DMP program: 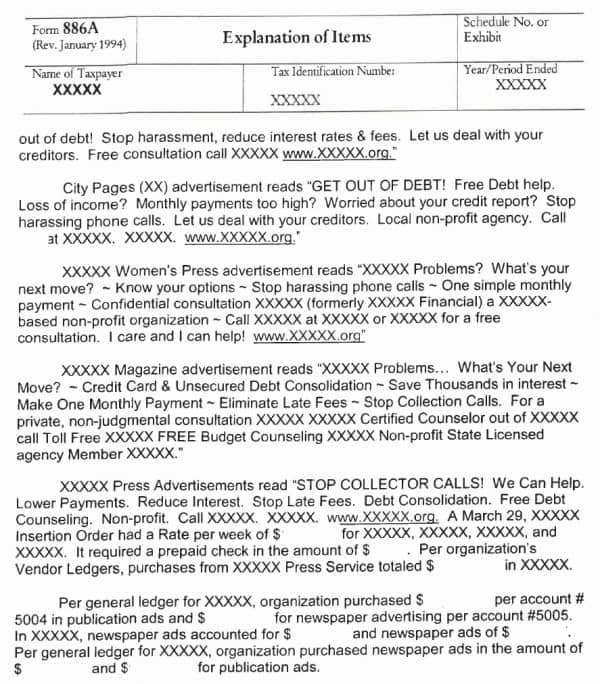 The IRS took note of a number of paid advertisements the organization had placed that appeared to be geared towards DMP enrollment.

These advertisements were placed in a number of locations including local papers, telephone books, magazines, press releases, and other printed ads. 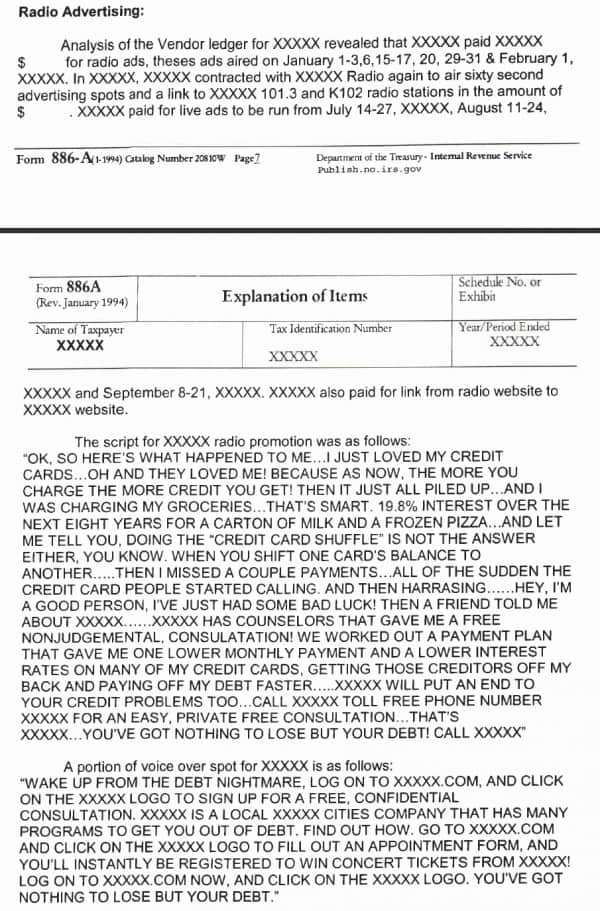 The IRS appears to have also taken notice with the radio advertising spots run that seem to be geared more towards enrollment in a DMP.

Advertisements for “counselors” appears to have been problematic as well. The employment ads talk about the employee will need to “enter all leads into the lead tracking system” and “Cover/handle appropriate share of all leads including phone calls, internet leads and face-to-face appointments.”

Counselors are also required to have a “Minimum of 30 new clients enrolled per month.”

Counselor employees were paid based on DMP enrollments and retention. “Employees wee required to enroll a minimum number of DMP accounts to keep their job.” Emails from the Director of Counseling reflected a continuing concern about employee productivity and there were Personal Action Notices of warnings for failure to reach the minimum DMP enrollment per month.

Pay was apparently based on the number of DMPs enrolled per month. 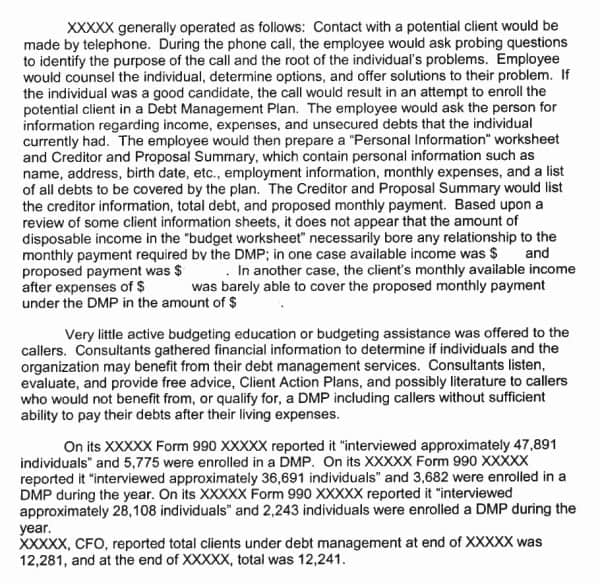 It appears to me the IRS felt calls to the nonprofit organization were treated more as a screening opportunity for the DMP rather than a charitable educational event.

Of interest was the statement, “If the individual was a good candidate, the call would result in an attempt to enroll the potential client in a Debt Management Plan.”

“Very little active budgeting education or budgeting assistance was offered to the callers,” and the IRS specifically notes the goal of the call was to identify potential clients for their debt management services.

It appears problematic that only those that has sufficient income to afford the DMP payments were screens to see if they would “meet creditor specifications for acceptance to a DMP.” This is a continuation of the position many have stated that it is the creditor that drives the DMP and not the credit counseling agency. 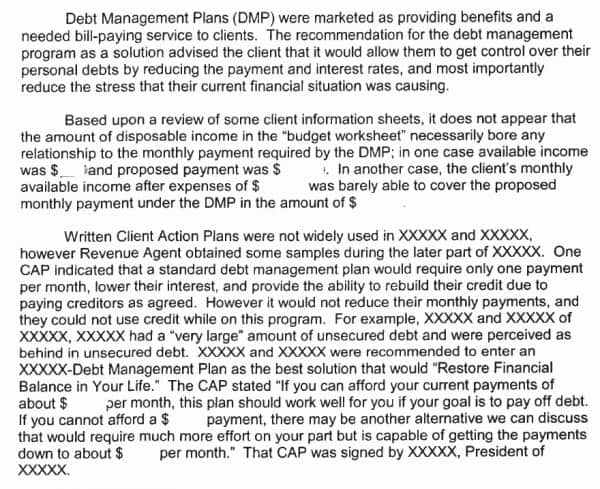 While not stated specifically by the IRS, at least some of the benefits told to consumers included improving their credit. This certainly runs into trouble of dragging credit counseling groups into issues with the Credit Repair Organizations Act. 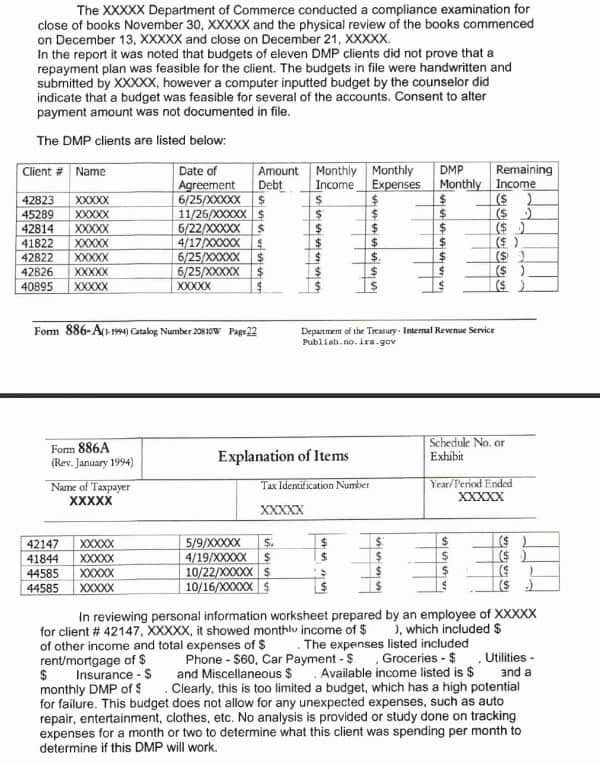 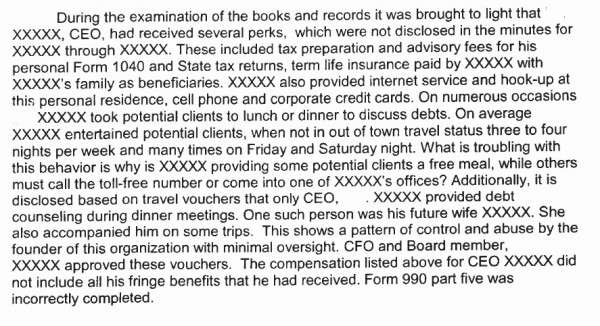 The IRS took exception with perks the president of the credit counseling group received. They noted he had received “tax preparation and advisory fees for his personal Form 1040 and State tax returns, term life insurance paid by XXXX with XXXX’s family as beneficiaries.” Perks also included internet service at the CEOs home, cell phone and corporate credit cards. The most surprising finding was that on numerous occasions the CEO “took potential clients to lunch and dinner to discuss debts.” Who does that?

“On average XXXX entertained potential clients, when not in out of town travel status three to four nights per week and many times on Friday and Saturday night. What is troubling with this behavior is why is XXXX providing some potential clients a free meal, while others must call the toll-free number or come into one of XXXX’s office?”

“Additionally it is disclosed on travel vouchers that only CEO XXXX provided debt counseling during dinner meetings. One such person was his future wife XXXX. She also accompanied him on some trips. This shows a pattern of control and abuse by the founder of this organization with minimal oversight.” 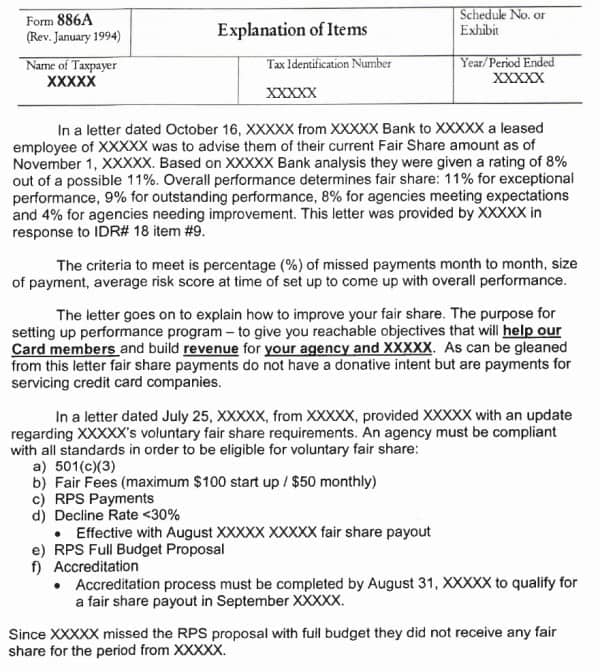 The IRS documentation talks about how the nonprofit credit counseling organization was incentivized by at least one creditor to collect payments.

As can be gleaned from this letter fair share payments do not have a donative intent but are payments for servicing credit card companies. 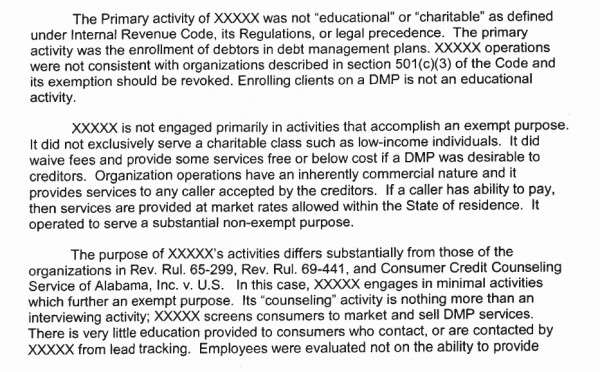 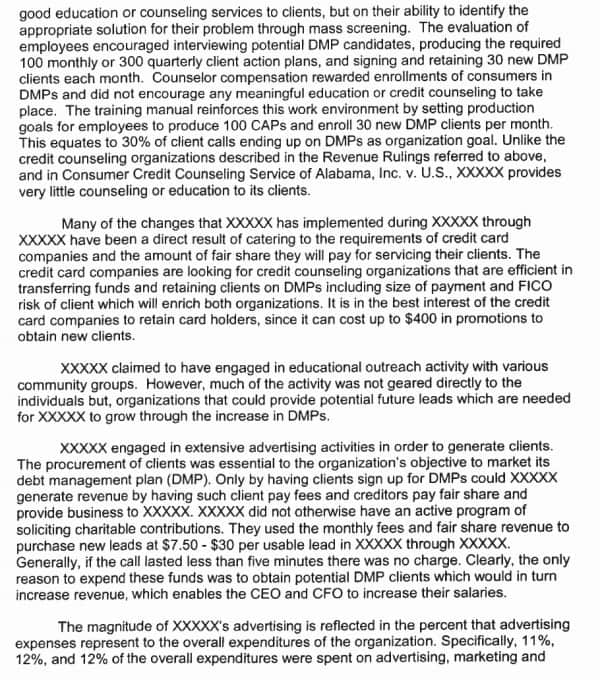 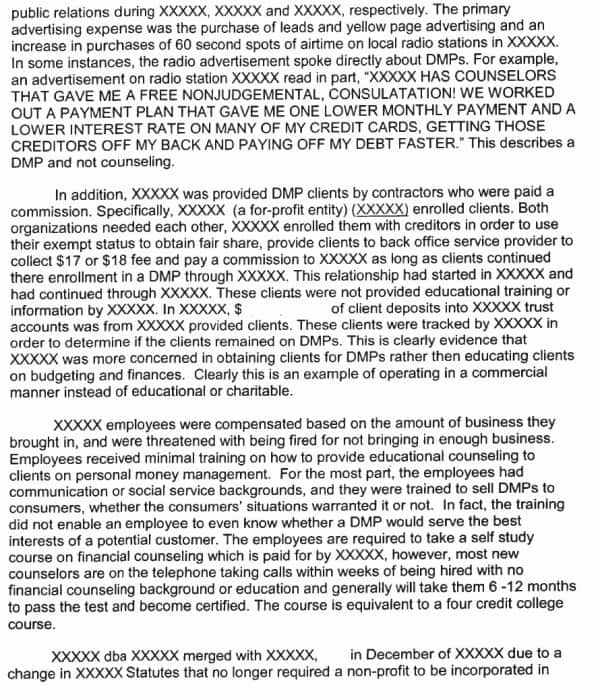