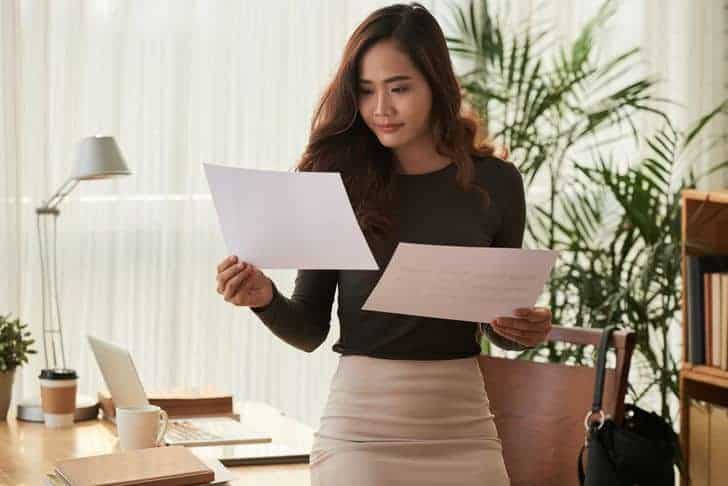 For those in the debt relief space, the name Thomas Lynch is familiar. Lynch has been in a number of posts here over the years.

I have no idea how Lynch keeps up with all the activities in his life. I even got information from a tipster (send in your tips here) . about new issues surrounding Lynch.

I didn’t look at any alleged local issue but just in federal court, there are a bunch of open cases.

The petition was filed by Kevin Tang, the partner of Thomas Lynch.

The bankruptcy petition says there is an ongoing issue, “Cause of Action against Thomas J. Lynch for Breach of Fiduciary Duty and Partnership Agreement” along with a loan owed by Lynch to the company. Apparently Lynch also owes a $500 unpaid balance on a loan to post bail.

Lynch states, “After being introduced to Plaintiff LYNCH as a successful businessman and thereafter knowing Plaintiff LYNCH for several months and repeatedly commenting on the quality of LYNCH’s work in the debt relief services industry, Debtor TANG approached LYNCH with a plan. TANG would invest with LYNCH as fifty-fifty Partners, i.e., they would go into business together. A Partnership Agreement (Agreement; EXHIBIT A) was drafted and signed on March 8, 2019. LYNCH agreed to the Partnership and began teaching TANG everything he knew about the industry complexities. One being, the change in the name of the business from Veritas Financial Solutions LLC, a California Limited Liability Company (Veritas) to Consumer Financial Alliance LLC, a California Limited Liability Company (CFA) because LYNCH advised TANG there was another business named Veritas in the industry who LYNCH had known the owners for over ten (10) years, so LYNCH came up with the name of CFA and LYNCH got CFA up and running.”

“After only a period of eleven (11) months, LYNCH went to the partnership office of CFA located at 18377 Beach Blvd., Suite 211, Huntington Beach, CA 92648, only to find out he had been locked out. LYNCH and another employee physically attempted to enter, only to be physically forced out by TANG. (LYNCH Deck |16). On this same day, TANG informed LYNCH that he was terminating the partnership, without the required notice, and filing for bankruptcy. (LYNCH Deck f 18). LYNCH attempted to make it clear to TANG at that time that TANG had no such authority, but TANG literally threatened LYNCH, locked him out and commenced these unnecessary proceedings.”

“This is following a flurry of communications between LYNCH and TANG regarding the future of CFA. As previously stated, LYNCH brought a viable business model to TANG. The offer by LYNCH was to start a debt relief services company with TANG. LYNCH’s proposal to start a minimum Five-Million Dollar net profit/year company would require approximately One Hundred- Fifty Thousand Dollars to become cash positive, which is unheard of in the industry. Only because of LYNCH’s cutting-edge model was LYNCH able to achieve such results.”

It appears to be the position of Lynch that he would prefer if the bankruptcy filing was discharged and Consumer Financial Alliance continued “until the Partners mutually agree to terminate it.”

That should make for some fun partnership meetings.

NuVision states, “6. On or about August 20, 2018, Defendant entered into a written agreement wherein plaintiff provided defendant with a money loan in the sum of $7,000.00 and under which Defendant agreed to pay regular monthly installments to Plaintiff in the sum of $169.71 at the annual interest rate of 14.10%, as well as late charges. A true and correct copy of the agreement is attached hereto as Exhibit A.

7. In applying for the loan, the Defendant submitted a paystub with a reporting period of July 16, 2018 through July 31, 2018. The paystub claimed a year-to-date gross pay of $91,980.11 and Semi-Monthly pay of $5,792.45. The paystub was false as the Defendant has stated in his statement of financial affairs that his gross income for 2018 was only $5,000.00. Therefore, defendant knew his promise to make the payments to the Plaintiff was false as Defendant knew before entering could not have afforded the payments based on a yearly income of $5,000.00.

8. In addition to falsely reporting his income, Defendant made only one payment on the loan agreement. The only payment made on the agreement by Defendant was on October 4, 2018 and Defendant failed to make any payments due thereafter.”

I would bet Lynch objects to the allegations.

The NuVision case above mentioned a bankruptcy filing by Lynch. On January 15, 2019, Lynch did file for Chapter 7 bankruptcy protection.

He states he has an ongoing labor complaint against Liberty Debt Solution and Brian Roche. I believe it is this case.

Lynch lists creditors that have unsecured claims against him. Some of them are Brea Financial Group, Consumer Legal Services of America, potential legal action by Jesse Cavett and Jon Paul Sanchez, some issue with Keith Fink and Associates, and a lawsuit with OC West.

But then the petition goes on with an interesting list of who should be notified about the filing. This includes Ira Frazer and Thomas Moore, which are names from the debt relief field. 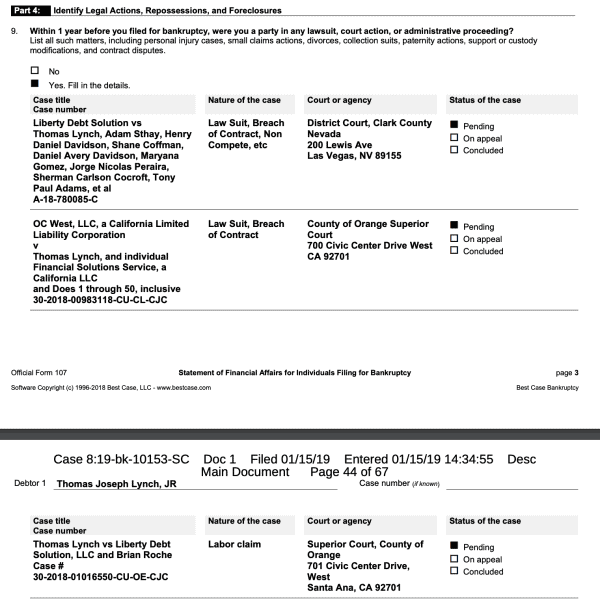 I don’t know how Lynch keeps up with this all. It seems like it is all exhausting and must suck up quite a bit of his life.