My goodness, truth is stranger than fiction and this story is a doozy.

So here it goes. The players in this story are:

In November of 2006 the Johnson Law Group NV and CBDC entered into a back office outsourcing agreement. In exchange CBDC would receive payment for each client it provided services.

In 2007 Thomas Roland approached Johnson Law Group NV and wanted to expand business. CBDC is run by Isaac Bobbe and Pablo Mendelson and is owned in part by Thomas Roland. Issac Bobbe and Thomas Roland own Elimidebt Management Systems, a company that is in trouble with the West Virginia Attorney General. A lawsuit filed over all this stuff states that “During 2007, a large debt consolidation law firm in Florida (Hess Kennedy), was investigated for improper activity. Based on this change, Roland allegedly saw an opportunity to expend the rolls his companies played in Florida and an opportunity to set up a law form similar to Johnson law Group NV to operate out of the Florida market.” Source

The plan appears to have been to essentially duplicate the services offered by Johnson Law Group NV under the new entity of Johnson Law Group FL. And as the suit states, with Thomas Roland’s knowledge of the inside of the relationship with CBDC, ESS and Johnson Law Group NV, it gave him an advantage in not having to reinvest the wheel to launch the new confusingly similar company in Florida to provide similar services. This all happens even though CBDC and ESS have agreements in place with Johnson Law Group NV and partners.

Johnson Law Group FL is run by Clint Johnson ([email protected]). Interestingly his office address, as of at least April, 2009, is now in the same building as the Thomas Roland companies of Consumer and Business Debt Counseling Services, Elimidebt Management Systems, and Enhanced Servicing Solutions. It all sounds very cozy.

It appears that the Johnson Law Group FL has had a busy year with a number of consumer complaints against them. In fact they have now earned an “F” rating by the BBB.

Clint Johnson appears to be a busy man in his community having been a member in founding Empowerment Ministries Church as well. 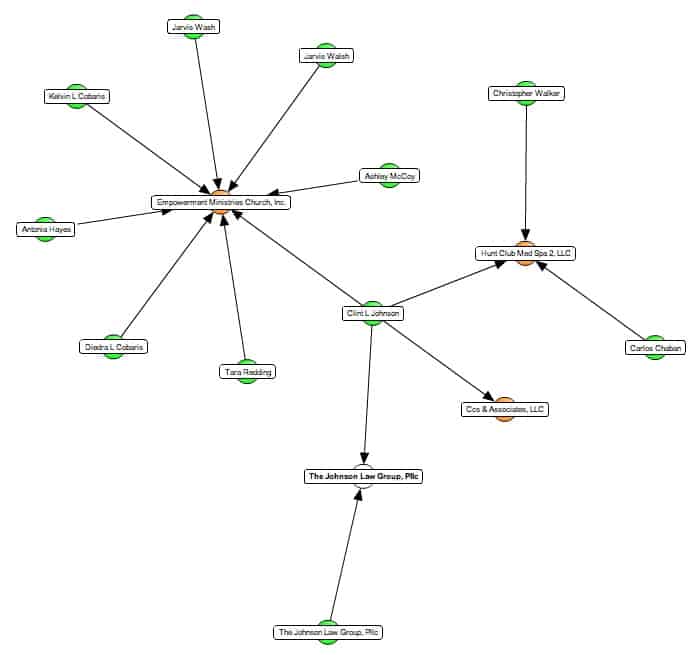 This situation is still ongoing but I think it’s going to be interesting to watch how this unfolds. I am especially interested to see how Clint Johnson, who might now be in a business relationship with someone he can’t trust not to steel his business, can synch his obviously strong Christian beliefs with the damage done by the debt settlement industry. WWJD