It is one of those topics that has become politicized rather than remain rational and logical. 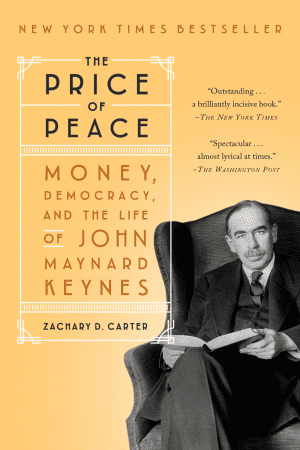 A recent post from Zachary Carter, the author of The Price of Peace: Money, Democracy, and the Life of John Maynard Keynes raised some very interesting points worth remembering.

Debt forgiveness is important to a fully functioning, healthy economy. Debt elimination is part of the Bible, the U.S. Constitution, and routine government functions in various sectors. The USDA even runs a debt settlement program for farmers.

Indeed, debt relief has always been the handmaiden of debt itself. In the United States, we have a formal legal process for eliminating nearly all forms of debt: bankruptcy. When debts become unbearable, people file for bankruptcy to have them discharged in court. In the 15 years preceding the pandemic, more than 14.3 million people filed for bankruptcy. In the decade before the pandemic, more than 20,000 businesses filed for bankruptcy yearly, with a high watermark of 60,837 in 2009. Debts are discharged daily in the United States and have been for decades.

As Carter says, “Capitalism would collapse without debt relief systems. Businesses get in trouble all the time—both good businesses that would work fine without a few onerous debt deals, and bad businesses that need to be liquidated or restructured. Sometimes bad things just happen. People get divorced. They get injured and are overwhelmed by medical bills. They get laid off. They have to pay for a parent’s funeral or care for children with special needs. And yeah, some people just don’t know how to manage their money and buy things they can’t afford. But we do not consign such people to never-ending financial servitude as a result of unforeseen circumstances, or even totally reckless spending habits. We have a formal process to eliminate debts and start over, with a reasonable chance of living a healthy financial life.”

The issues building today regarding student loan debt don’t hinge on the finer points of forgiveness. No, the problem today was manufactured by special interests and politicians that meddled in changing the bankruptcy code.

“In 2005, Congress passed a law that made it next to impossible to discharge almost any form of student debt. Even the most creative consumer lawyers estimate that only about $50 billion—less than 3 percent of the $1.75 trillion in outstanding student debt—had the potential to be wiped away, but only if students could persuade a court that they had been egregiously wronged, by say, non-accredited programs or institutions that didn’t actually offer degrees,” says Carter.

He’s right. Bankruptcy is an orderly process that allows for the individual examination of debtors to determine if they are eligible for a legal Fresh Start.

Consumers must consume. Their job is in the name.

Carter says, “There’s no real reason why student debts should be so much more onerous than others. Let’s be clear about the supposedly reckless gambit that student debtors embarked on. They didn’t go to a casino, or buy a Maserati or make bad bets on meme stocks. They tried to get an education—exactly what parents, teachers and financial advice columnists have been telling kids to do for decades if they want to live better and more profitable lives.”

That’s an interesting point to ponder.

You do have to give Carter some props for his observation that the Biden student loan forgiveness program is not perfect, but it might be the best we can do now. Excellent point.

“There are perfectly reasonable critiques that can be lodged against Biden’s program. The plan isn’t comprehensive—only $20,000 can be discharged, and this is only for borrowers whose incomes were low enough to qualify for Pell Grants. The program looks the way it does because it is the only solution to this problem that our current politics will bear.

It would be far better to reform the higher education financing system than to simply wipe out a big chunk of higher ed debt. In a better America, students wouldn’t have to pay any more for a college education than they do for a high school education.

But we don’t live in that America right now. In time we may be able to reform the broader higher ed system, but for now, providing reasonable debt relief is the best our government can do.

Biden’s student debt relief initiative is no wild, unprecedented idea. Governments pay for education and eliminate unsustainable debts. That is how the world has worked for centuries.”

If I had a magic wand to wave, it would be to not go forward with the Biden student loan forgiveness program and just return all student loan debt to elimination through bankruptcy.