Two leaders of the Hells Angels are finding out that you’re not truly “bad to the bone” until you’re accused of mortgage fraud.

News hit the press late Tuesday night that a mortgage broker in the San Franscisco bay area was charged with conspiring to arrange more than $10 million in fraudulent home loans including the two aforementioned Hells Angels leaders. 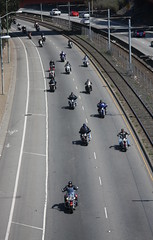 Between 2006 and 2007 it appears several falsified loan applications for real estate were conjured up in the Bay Area. The federal grand jury indictment accuses Raymond Foakes and Josh Leo Johnson, of the Hells Angels, Jacob Moynihan, the mortgage broker at Xanadu Global Investments, and five other defendants that allegedly took part in this scheme. So far seven defendants have plead not guilty and the eighth has yet to be apprehended.

Raymond Foakes is a former president of the Sonoma County Hells Angels and his attorney has commented that he actually made his mortgage payments on his home that is in question. His attorney isn’t certain if his application was submitted accurately but said, “overstating one’s income when seeking a home loan ‘was common practice at that time’” – Source.

I’m not sure that will hold up in court!

Foakes previously did jail time in 2002 after a brawl with another rival motorcycle gang at a casino Nevada which resulted in three people’s deaths. It appears this is a man not to be messed with.