A reader sent me the link for a contest held by the debt settlement company United Debt Services.

The contest page says that United Debt Services, UDS, will hold a contest monthly and the video shown is of the first drawing held on October 31, 2011.

Promotion limited to existing customers of United Debt Services who have been enrolled in the program for at least 1 months and completed all program terms and payments. Random drawing by company representative will select one customer to receive up to 40% of $40,000 debt load. Timing, direction and amount of payment at discretion of company. Valid where not permitted by law, and company may withdraw or cancel promotion at its sole discretion. Payment will be made directly to creditors of company choice and does not include banking or service fees, customer responsible for all taxes on gift. General release required prior to payment. Not open to Florida residents. – Source

The first winner was Loraine Rosa from Pennsylvania. 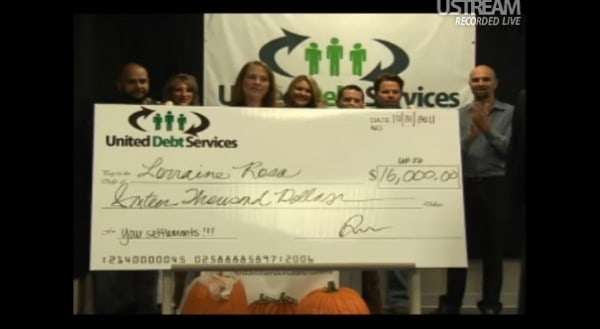 The second lucky winner was William Gallagher from Michigan. 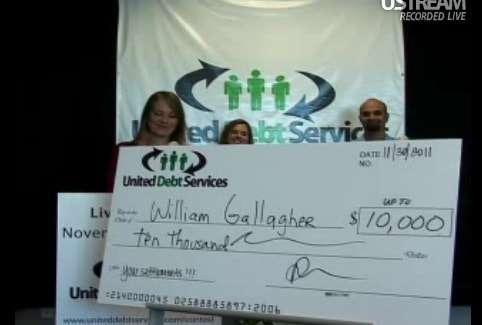 You can watch the full presentation videos below, at least for as long as they remain up.


I did have to chuckle that the terms say “Valid where not permitted by law,” I don’t think that’s what they meant to say.

As far as the prize goes, the company is apparently giving away money and they taking their fees out of the money rather than using the entire amount to pay off debt or even setting aside funds for taxes. I wonder if they will be issuing a 1099 to the winners as well. Imagine that, taxes due on the forgiven debt and taxes due on the prize money.

And so what happens if the company uses the awarded funds to settle the debt and does not set aside the money to pay the taxes on the winnings? That’s right, the winner is going to have a potentially big tax bill due to the IRS.

And just one observation, doesn’t it seem just a little too convenient that the client manager is right there up on stage. For a random drawing they don’t appear to do a lot of calculating to figure out what the amount due is. And isn’t it interesting that both checks wind up being an even amount?

And while I’m at it. The company says winners will get “40% of [their] debt paid off up to $40,000,” they also say “Timing, direction and amount of payment at discretion of company.”