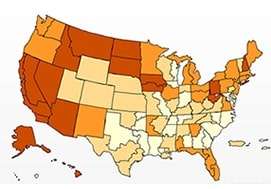 Bankruptcy filings in the federal courts fell 13 percent in calendar year 2012, according to data released today by the Administrative Office of the U.S. Courts. The number of bankruptcies filed in the 12-month period ending December 31, 2012, totaled 1,221,091, down from the 1,410,653 bankruptcies filed in CY 2011.

In CY 2012, filings fell under all chapters of the U.S. bankruptcy code.