In what struck me as a moment of irony, I read this morning about TVI Corporation, a Maryland based manufacturer of disaster shelters and other protective equipment, that has filed for Chapter 11 bankruptcy protection. 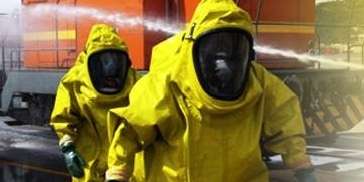 It seems that while they manufacturer many types of disaster shelters, they didn’t have one to protect them from financial disaster.

In an effort to help diversify their income, TVI had extended their services to include not only, emergency shelters, protective gear for military and law enforcement, but party tent rentals. It sure doesn’t seem like the most likely addition in business to a company that normally sells infection control supplies. Maybe they rented some tents to some pretty dangerous parties? But it what wasn’t a surprising move, Last December TVI sold, unloaded, the party tent portion of their business.

GLENN DALE, MD – December 9, 2008 – TVI Corporation (NASDAQ: TVIN), an international supplier of military and civilian emergency first responder and first receiver products, personal protection products, quick-erect shelter systems and equipment rentals, today announced the December 3, 2008 sale of its Frederick, Maryland Signature tent-rental assets to Wisconsin-based Karl’s Event Rental for $2.1 million. In connection with the sale, Karl’s Event Rental also assumed the lease agreement for that location. As a result of the transaction, TVI expects to incur charges totaling approximately $100,000 in the fourth quarter of 2008 related to legal, severance and other transition costs. TVI previously announced its decision to close its Frederick location and exit the tent rental business. With this sale, the Company has completed the exit and fully monetized the assets associated with its tent-rental business.

But the good news is that if you are looking to source your next purchase of autopsy pods, TVI is the place to get them.

Follow Me
Latest posts by Steve Rhode (see all)
See also  My Husband Lost His Job. What Can We Do To Get Help From The Credit Card Companies? - Cyndi