It is unclear what privacy policy the user submission of this information to this site, or any regulator, would violate. According to the SLA site privacy policy (source) the submission appears complaint and the document submitted does not appear to say it is not permissible.

What Do You Feel is Wrong With the Story in Question?: Please remove the screenshots and pdf of my contract with SLA, LLC. My name has not be censored out completely on some of the documents, and I’ve been contacted by SLA that they will pursue legally if I do not remove the document, since I am violating their privacy agreement. I do not wish to have any more trouble with these guys. Can you please just remove the documents from the complaint? Thank you.

What’s the Suggested Fix?: Please remove the screenshots and pdf of my contract with SLA, LLC. My name has not be censored out completely on some of the documents, and I’ve been contacted by SLA that they will pursue legally if I do not remove the document, since I am violating their privacy agreement. I do not wish to have any more trouble with these guys. Can you please just remove the documents from the complaint? Thank you.

I received several phone calls over a couple weeks with an automatic message regarding my federal student loans and that it could possibly be reduced.

I thought this call was from my loan provider so I gave them a call back. The number was an 888 number. A person picked up and transferred me to a case manager named Kelly Wilson, who was very nice and said that her goal is to provide me with the lowest monthly payment.

I provided her some information regarding my work and income. She proceeded to asking me my pin number, name, and social security, which I should have taken as a red flag.

She pulled up my information and said that all these loans will be consolidated. They will pay the total sum which will increase my credit score. After doing further calculations regarding my income and how long I’ve worked, she said that I would only have to pay $45.83 a month for at least one year, after that the monthly payment will need to be reassessed.

However, I would have to make an initial payment at $349 because Great Lakes still expects a first month payment (my grace period was coming up). She sent me the contract via emailed and encouraged me to sign it. I hesitated and said that I would like to look over the details before signing, but she pushed on and said that she wanted to make sure all the information was correct. I signed the form electronically. She also asked me for 2 references that do not live with me.

After hanging up, I felt uneasy and started doing research. I had no idea student loan aid scams were a thing, but it is obvious that I’ve been scammed. I emailed her asking about the legitimacy of the company.

I also responded saying that I would like to cancel since the contract gives me 14 days to do so. She replied back saying that she would like to answer all my questions and would not want to make me uncomfortable. But provided the email of Processing@studentloanaid.us, where I would need to email if I want to cancel my contract.

I have emailed them but have not heard anything back. I also called them at the phone number provided (949)SLA-HELP but the line was busy and left my name and phone number. The problem still exists and my contract has not been cancelled. I am on day 2 in this matter as of today, trying to act quickly to avoid any major repercussions. 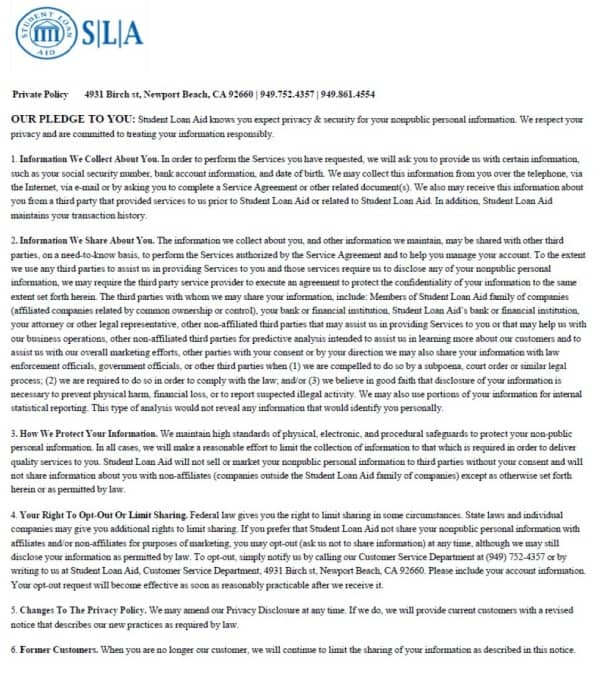 Consumer
This is information that was submitted by a third party and not generated by GetOutOfDebt.org or Steve Rhode.
Latest posts by Consumer (see all)
See also  Student Loan Aid - Consumer Complaint - February 14, 2016