It seems that Congress is looking to pass the Payday Reform Act. The bill’s sponsors say they want to make the payday loan industry, better than it is right now. Of primary concern to lawmakers are the fees charged by cash advance and payday loan companies. Yeah, but when you look at what a bank or credit card charges you for an overdraft or late payment, a payday loan isn’t all that expensive.

I have said it very clearly before, a payday loan can be an appropriate tool to use in limited situations when no other lender is available for a short term loan.

Unfortunately, after having had the chance to go and interview some payday lenders and a lot of experience in working with people on the wrong side of a payday loan, the reason this industry is going to get itself regulated out of business is because of their own stupidity and greed.

Payday lenders should have adopted the “one loan, one person” philosophy years ago. They never should have allowed a consumer to take out a second payday loan when they already had another one outstanding. They could have proactively done this by creating a payday lender credit bureau and promoting compliance as industry good practice.

I rarely, if ever, see people get buried under the weight of one loan. It is always the piling on of multiple payday loans that sinks the consumer. Now this isn’t all the fault of the payday lender. There is nothing that prevents someone from going and getting a payday loan from every payday store in town. Since the different payday companies don’t check with each other, they knowingly let the consumer get overcommitted.

Payday lenders didn’t just appear on the scene in recent history. I’ve previously written about payday lenders in my History of Credit and Debt. Here is what I said in the online exhibit.

Today, when we think about the neighborhood finance company, it usually carries a negative connotation. Storefront lending is now the place you go when the bank won’t touch you, or so many believe.

Personal finance companies played an important part in accelerating the consumption of credit in America. Ironically, that was not their intention.

In the 1920s, if you wanted a small loan, your choice of supplier was usually limited to the “loan shark.” In order to help people avoid such unscrupulous borrowing, small-loan offices appeared. These offices wanted to assist workers with budget advice and affordable loans for emergency situations and were viewed as bastions of social welfare and of charitable purpose.

The intention of finance companies was to provide advice to workers and restore them to the path of financial control, Victorian thrift and self-discipline. The finance companies felt if they could only help people make out a budget and provide some advice, the financial troubles of the applicants would be eased. It did not take very long for the plan to explode in their faces as people came to them to borrow more and more. Finally, finance companies stopped counseling people, consumers just wanted the loans. Some finance companies, having overachieved on their objectives and unsatisfied with their inability to achieve their philanthropic objectives, closed their doors.

Early usury laws did more to hurt workers’ abilities to gain access to borrowed money. A tremendous amount of argument raged in written works of the time both for and against usury laws.

The unintended effect of usury laws was a growing underground of illegal lending. While it is true that throughout the ages some lending could be characterized as unconscionable, when legislatures set a maximum interest rate, it prevented many lenders from extending credit to those who, some might argue, needed it most.

Interest rates are determined by a number of factors: cost of funds, quality of the collateral and risk of return. When the usury rates were determined, they did not account for the ability of lenders to make loans to the more financially challenged members of our society. This unreasonable control of the free market value of funds created an artificial ceiling on available cash and made lending so unprofitable as to cause many lenders to close.

You can see natural market values of interest rates in operation today. While a new vehicle loan may cost 8.75 percent for 36 months, the same lender may charge 9.25 percent for a 72-month loan. And an unsecured personal loan may be at the rate of 16 percent.

Usury laws extend back to Jewish Mosaic laws that prohibited the charging of interest on loans. In modern times, usury laws determine the maximum amount of interest, which can legally be charged. Loans above the maximum legal rate are called usurious.

Finance companies labored under restrictive usury laws and limited the ability of consumers to obtain small loans. While it was popular opinion that there should be controls placed upon interest rates, consider the following facts: 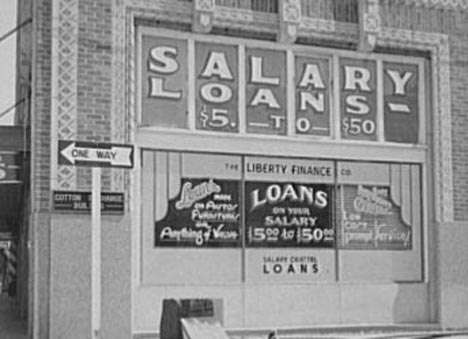 It is interesting to read about the history of Arthur Ham, a graduate student of Columbia University, who, in the early 1900s, studied small-loan lenders in detail.

Ham first concluded that finance companies of the day were causing a hardship on workers by charging high rates of interest.

However, after he led the campaign to pass usury laws to limit the amount of interest that could be charged, Ham completely reversed his position.

He originally felt, as do many people then and today, that high interest rates were an indication of shameless profit. However, as he became better acquainted with the loan industry, he discovered how interest rates for these loans were determined and why they were necessary.

Since the new lower, “protective” interest rates enacted were too low for small finance companies and philanthropic lenders to take on the risk of low-dollar borrowers, people had no place to turn for these small loans. After realizing what was happening, Ham moderated his views and worked with lender organizations to find a way for small finance companies to exist while eliminating the undesirable “loan shark” element.

It is interesting to see how history might repeat itself with payday lenders and finance companies with this new proposed legislation. A recent piece in the Wall Street Journal came to similar conclusions as people, like Arthur Hamm, have in the past. See Congress Takes Aim at Payday Loans: Evidence suggests price controls will make things worse for borrowers.

Before we have a knee jerk reaction that will lead to more harm for consumers, payday loan industry, let’s work to put commonsense and practical stopgap measures in place first with “one loan, one person” policing.

5 thoughts on “The Payday Loan Industry, Their Own Freaking Worst Enemy”