It is not looking good for people and their personal finances. But, from the data released by the Federal Reserve, it certainly appears the pent-up demand for saving and spending has exploded following the perceived end of the coronavirus pandemic.

Saving rates went way up during the pandemic. Between increased benefits and reduced expenses, people were doing well. Look at the monthly change in spending in the charts below. Those with the lowest incomes and levels of education are increasing spending the most. 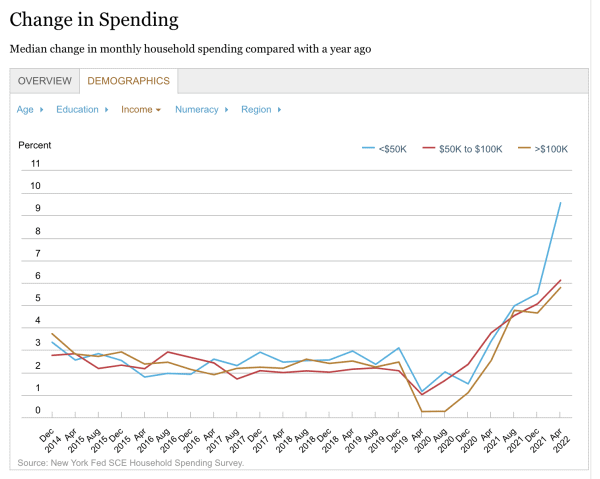 Living restricted lives over the past couple of years was no fun. However, now that people feel they are freer to move around, spending on recreation and fun tops their desires. 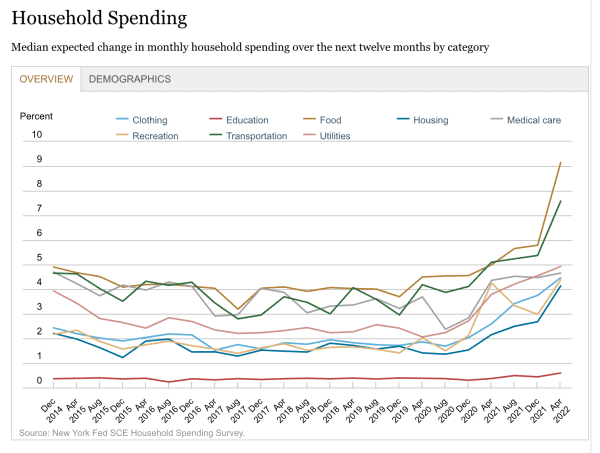 Cautious Expectations Ahead for Inflation and Recession

Suppose you step back and look at the economies of countries worldwide. In that case, you will see that inflation pressures and the possibility of a recession are not something happening in only America.

In the UK, inflation is rising at 9 percent. Fuel prices are exploding all over the world. The Guardian writes, “Not that families need telling – disposable incomes across the country have been hit hard. The price of unleaded petrol may have steadied at between £1.60 and £1.70 in the past month, but energy bills and food prices are soaring across the board.”

In Germany, “annual producer price inflation — that’s the price of goods leaving factories — topped 30% in March, the highest level in 73 years. Prices at the factory gate are feeding into consumer price inflation, which hit a 41-year high of 7.3% last month.”

Here is a look at the inflation rate in Germany over the past 25 years.

Here is the same period with US data.

And then I randomly picked Italy as an example.

As Expenses Rise, So Will Debt

If global inflation is rising, spending is increasing, and credit card balances are exploding, it doesn’t take much to see the near future could not be rosy.

On top of all this, the stock market has recently had some big drops as investors are pulling back.

As Barron’s wrote this week, “We’re now experiencing withdrawal pangs after the massive injection of fiscal and monetary stimulus of the past two years, which actually boosted asset values more than real economic activity. With manna no longer falling from Washington, consumers are resorting to credit cards to pay the soaring costs of incidental items, such as food, energy, and rent. Companies also are getting squeezed. Producer prices are racing farther ahead of consumer prices by the biggest margin on record.”

They say, “The notion of consumers sitting on an ample cushion of savings is wrong, Pomboy says, with personal savings back to the December 2019 level. Credit-card balances, which were slashed after America received its government stimulus fix, are ramping up at a record 16% annual clip. It’s hard to imagine consumers taking on double-digit interest charges on plastic if they weren’t strapped to pay the escalating tabs at the checkout counter, gas pump, and rental office, she adds.”

The best step you can take right now is to continue to focus on saving money to prepare for the eventual economic downturn that has the best odds of striking the world economy.