Effective April 7, 2010 US Debt Resolve, under the leadership of Scott Johnson, became the first debt settlement company in America to answer my challenge for openness and honesty in the debt settlement industry from my article “A Call, Make That a Scream, for Transparency in the Debt Settlement Industry.”

I’ve had conversations with some other debt settlement companies as well who support the call for openness and transparency but they just are not comfortable coming out with the information, yet. At least one more company is actively working on the page for their site and I should have an announcement about them soon.

When I told my wife about US Debt Resolve having the balls to embrace the openness call and publish their information for everyone to see, her spontaneous reaction was “They must be one of the good guys to trust in debt settlement.”

It’s the same reaction most consumers will have. They will recognize that US Debt Resolve is making every effort to be open, honest, transparent and a leader in the tiny pack of good guys in the industry. As of today, it’s a pack of one but I hopefully the pack will grow. 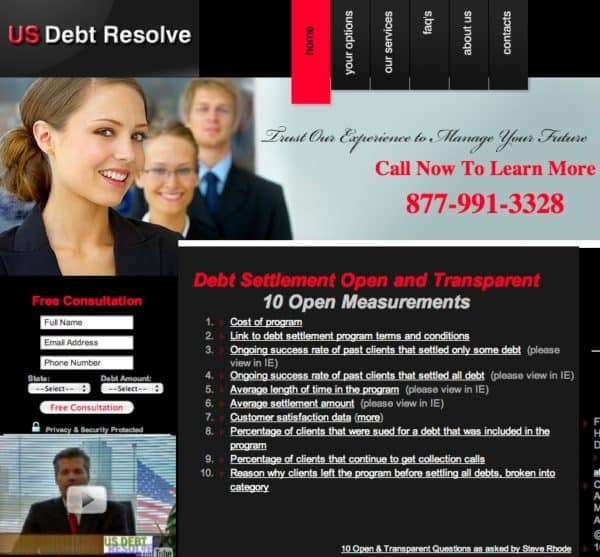 One of the objections I heard from one good group not yet brave enough to publish their list was an objection about publishing settlement percentages. They were afraid that consumers would use that information alone to make comparisons about who to work with. I understand their position but I disagree. I think consumers will look at the totality of the information and give significant weight to any debt settlement company that is willing to be open and transparent as a indicator of who to work with. A company that might have a lower settlement percentage might have a much higher customer satisfaction rating. That might be more important to the consumer. Bottom line, no one number or category is going to hurt an agency because any company that embraces openness and transparency is going to be a winner with consumers.

US Debt Resolve immediately recognized the benefit they could offer consumer about being open and transparent. They embraced it with gusto and clearly demonstrated that they want to be as open, honest and transparent as possible in order to better help people with debt problems and in the debt relief world that’s something to be celebrated and looked on as a badge of honor.

Three cheers for Scott Johnson and his team at US Debt Resolve for having the courage to be the first debt settlement company to embrace consumer honesty.