The Association of Settlement Companies (TASC) just sent out a press release (source) that contains the following statement:

Going to a website like http://www.freedebtreductionhelp.com will ensure that consumers are paired up with a legitimate and TASC certified debt settlement company. Consumers that have at least $10k in unsecured debt and that can prove a financial hardship will qualify for a debt settlement program.

So is it the position of TASC that consumers with less than $10,000 worth of debt are not worth the time of day or to give help to? TASC, remember, you are the debt settlement trade association that calls yourself the protector of the consumer debtor. – Source. Are you just pitching consumers that owe $9,900 under the bus? Could that artificial threshold be about profitability and your membership does not think it’s profitable to help people with less debt?

What first prompted me to write this article was what I saw when I went to the TASC recommended web site FreeDebtReductionHelp.com. 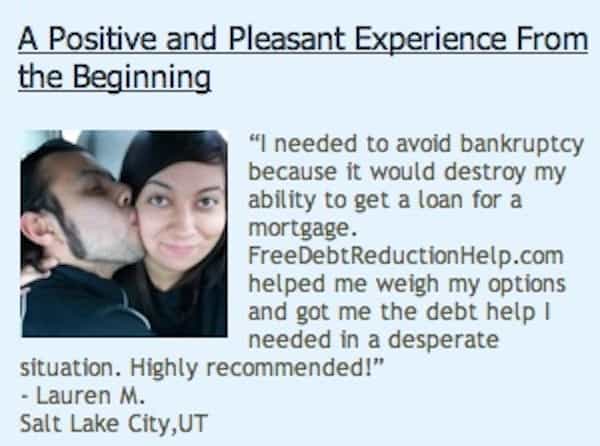 And it looks like the site is promising to reduce at least 50% of the debt enrolled in the program if you are luck enough to have more than $10,000 in debt.

If you are a consumer that has over $10,000 in unsecured debt then you will be eligible to legally eliminate at least 50% of this through a debt reduction process. – Source

Sounds like a guarantee to me. And isn’t that the kind of promise the FTC just warned people about? Why yes it is.

How about the misleading impression on the site that consumers who complete the online request for will get free help?

Free debt help is right around the corner. Once you fill out the short form on FreeDebtReductionHelp.com we will match you up with a top performing debt reduction service in your area free of charge. – Source

An unsuspecting consumer could read that and think they will get free help to eliminate at least 50% of their debt. But that’s not right is it. The TASC member they will be paired up with will probably charge 15% of the enrolled debt, only your referral is free, right?

So besides TASC officially promoting FreeDebtReductionHelp.com who is behind it. It’s a mystery! You would think that TASC would not recommend such a secretive site.

The domain was originally registered November 16, 2009 but the domain ownership is hidden so we can’t see it. And even the site itself makes no mention of who is behind the site. The site is even hosted on a shared Godaddy server with a bunch of sites including Sc4nic.com, 09-11-xx.com, 1000cy.com, and 4,000 other sites.

Here is what I do know.

And the toll-free phone number on the FreeDebt ReductionHelp.com site 877-853-6466 is also used by the following companies or sites:

So when a consumer gives up personal information through the TASC approved and recommended referral site, where the hell does the confidential information go? Does it go to all these other sites as well?

President Obama has taken financial bailouts to a new level and there is more money available than any time in history. If you are over $10,000 in debt it would be wise to talk with a debt settlement company who can increase your chances of getting accepted for these government grants and will also be able to provide personal debt relief. – Source

And TASC, isn’t that the very same message that you warn people to avoid? It was you yourselves that said:

Rest assured, we will do everything in our power to call attention to these deceptive practices and put these companies out of business. If you encounter any of these marketing pieces or know of any companies that use them, please let us know immediately. – Source

And when you said “TASC’s biggest issue was with the fact that these statements are centered around the idea that the debt settlement industry is filled with scam artists.” in your press release were you giving an exception to FreeDebtReductionHelp.com before you recommended the site?