This case is so fresh I’m not sure if Legal Helpers Debt Resolution even knows about it yet.

The suit alleges the Legal Helpers Debt Resolution (“LHDR”) holds itself out as a law firm that settles debts. The sales process works with “financial representatives to provide much of the “front end” sales work of intaking and signing debtors up to purportedly begin an attorney client relationship with LHDR for the settlement of debts.” LHDR pays a fee to these representatives.

The consumer in this case received a direct mail piece that led to Armored Financial Services and Eric Chung. Chung is not an attorney.

The contact the consumer entered into provides for advance fees that are collected prior to the completion of debt adjusting services. LHDR outsourced the account services and negotiations to be provided to CDS Client Services.

The complaint states that in an attempt to skirt NC laws regarding limitations on advanced fees for debt adjusting, LHDR ran ads on craigslist looking for attorneys. Linda Carol is identified as an attorney licensed in NC to represent LHDR. “However, the services provided to the Plaintiff and others similarly situated through LHDR were not actively performed by an attorney licensed to practice law in North Carolina.”

Jeffrey Hyslip sent a letter to Capital One claiming to represent the consumer but Hyslip is not licensed to practice law in North Carolina. The complaint alleges that LHDR and CDS are acting as an illegal debt adjusters in North Carolina and that the authorized North Carolina attorney, Linda Carol, does not actually provide services to Plaintiff nor communicated with the Plaintiff.

Neither Hyslip nor any manager of LHDR is licensed to practice law in North Carolina. The complaint alleges that is in violation of sections 55B-16(2) and 55B-4(3) NC Gen Stat.

See also  How Can I Join In the Class Action Lawsuit Against Legal Helpers Debt Resolution?

“Upon information and belief, under a substantial number of LHDR’s advance fee contracts, financially pressured clients cannot and do not make their scheduled monthly payments under the Contract and therefore lost all advance amounts paid to LHDR and CDS without receiving and debt settlement results of benefits.”

“The legal services provided by LHDR under the Contract, consisted of one letter attached hereto as Exhibit D, were therefore de minimis, and accordingly its promises under the Contract were illusory. At most, LHDR provided clerical and administrative services to the Plaintiff, while CDS was to do the primary work of negotiating with Capital One.”

The lawsuit states that while LHDR attempted to exempt itself under North Carolina law as attorneys engaged in debt adjusting, the services were not provided by attorneys licensed to practice law in North Carolina.

LHDR has not settled any debts to date. “When the Plaintiff contacts LHDR regarding the progress of his debt settlement, the non-attorney agents with whom he speaks inform him that LHDR will do nothing until he has paid all payments under the Contract, a total of $25,975.20, which is an amount equal to 60% of his original total debt outstanding owed to Capital One”

Local NC attorney Carol is accused of acting negligently in the suit. The complaint states… 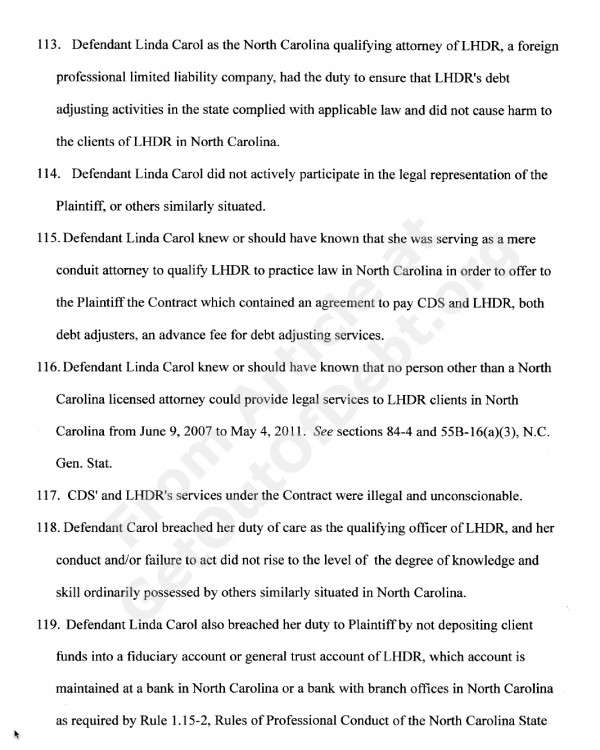 You can read the entire lawsuit here.

Other Legal Helper Debt Resolution consumers that live in North Carolina who want to learn more about this case should contact the attorney that filed it: