It’s interesting how feedback from real people is often different than what we hear out of Congress and the influence of politics. If you believed what is broadcast on the news we hear the Republicans in Congress are against the regulation and powers of the new Consumer Financial Protection Bureau, a single agency with oversight over financial affairs.

But in a survey conducted by AARP, the Center for Responsible Lending, and Americans for Financial Reform, the message from Main Street is that people of all political affiliations want the CFPB or certainly a CFPB like agency to exist.

The pollster had this to share from their survey.

• Despite severe partisanship in Washington, voters across the country are united in their support of Wall Street reform and nearly half are prepared to punish members of Congress at the ballot box if they vote to repeal Wall Street reform.

• Conventional wisdom tells us that nobody wants government regulation and bureaucracy.  In reality, voters don’t buy this argument when it comes to Wall Street reform and start out believing we need more government regulation of financial companies.  They support having a single federal agency with the single mission of protecting consumers from financial companies and reject the false argument that Wall Street reform stands in the way of getting our economy back on track. – Source

The overall response of consumer voters to needed regulation was overwhelming supportive. 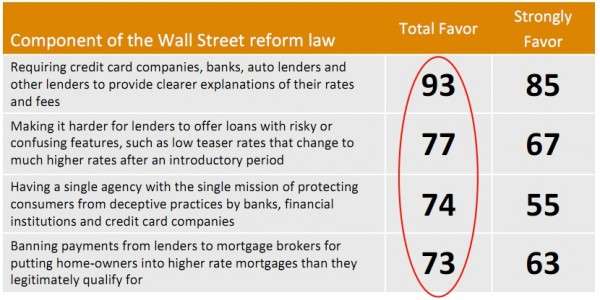 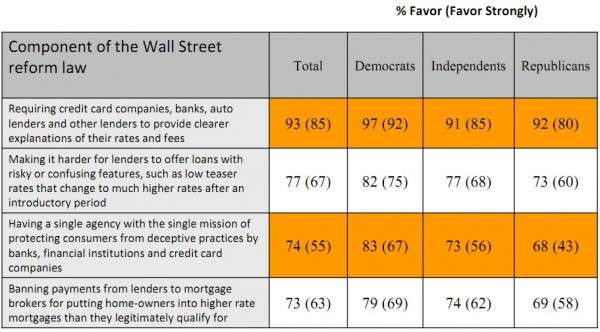 What is Your Opinion

I’d love to hear from you in the comments below if you think credit card companies and other financial service providers need more or less oversight.