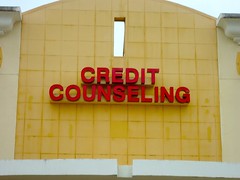 This is actually a picture of the UFS building that a reader sent in previously.

The Florida Attorney General just made a big announcement concerning the non-profit credit counseling group United Financial Systems. This is a company that we first announced was likely to implode back in August of 2010.

Unfortunately the economic impact caused by United Financial Systems will linger and it will take time for consumer to hopefully get refunds. Refunds are hopeful but not guaranteed if the required installment payments are not made.

Attorney General Pam Bondi today announced that her office has reached a settlement with the debt consolidation company United Financial Systems, Inc. and its principal, Christopher Boulahanis. The settlement resolves an investigation into the company’s failure to provide consumers promised refunds. The agreement requires the company to refund approximately 500 consumers more than $595,000 in restitution in total.

“The people who sought financial relief from this debt consolidation company were already facing difficult financial times, which were exacerbated when the company failed to refund their money. I am pleased that we are helping 500 consumers receive nearly $600,000 in restitution,” Attorney General Pam Bondi stated.

The settlement agreement provides a strict enforcement mechanism such that any failure to make timely payments by United Financial Systems will result in a court ordered judgment against the company and its principals for the full amount of refunds due plus an additional $500,000 in civil penalties. The settlement also precludes the company and its representatives from engaging in credit counseling, debt management or debt consolidation in Florida.

The settlement monies will be distributed to the defrauded consumers by the Office of the Florida Attorney General in two payments: a partial payment March 31, 2012, and a final pro rata payment Sept. 30, 2012. All affected consumers must submit a sworn affidavit documenting the amount of their loss postmarked by January 20, 2012.

Any consumers who were defrauded by United Financial Systems should contact the Florida Attorney General’s Office immediately if they have not submitted an affidavit in this matter. Consumers can download an affidavit form at www.myfloridalegal.com/UnitedFinancialSystems. The website will be routinely updated with new and relevant information. Alternately, consumers can obtain an affidavit or additional information by contacting the Economic Crimes Division directly at (954) 712-4600 or [email protected]

For this or any other case in which consumers suspect fraud, consumers can call the fraud hotline at 1-866-966-7226 (toll-free within Florida). – Source

When will I receive my refund?

The settlement monies are scheduled to be distributed to the defrauded consumers by the Office of the Attorney General in two payments: a partial payment March 31, 2012, and a final pro rata payment September 30, 2012. The total of the payments may be less than the total amount of the loss.

What must I do to receive a refund?

Will I receive a FULL refund of all my money?

The Office of the Attorney General expects to be able to provide 100% refunds, but cannot guarantee the amount of the refund until the full amount of the settlement is paid by the company and all the consumer affidavits are received and reviewed.

The refunds are being paid by United Financial and its principal in a series of monthly installments, which are subject to strict enforcement procedures. Because United Financial is no longer in business, the ability of the company and its principal to repay all the amounts owed is limited to paying over a ten-month period of time. In order to maximize the recovery for all consumers affected by this company, the Office of the Attorney General has determined that the most effective method of obtaining full relief to all consumers defrauded is this ten-month payment plan.

Has the Office of the Attorney General received my affidavit?

Where do I mail my affidavit?

If you cannot complete the affidavit form online, you may mail the signed affidavit postmarked by January 20, 2012 to:

I have a different question. Who do I ask?

This website will be routinely updated with relevant information. Alternately, you can obtain additional information by contacting the Economic Crimes Division directly at (954) 712-4600 or [email protected] – Source