I don’t think I’ve ever written a post telling people to go see any movie, but after seeing the new George Lucas film Red Tails, I feel compiled to tell you how great the film is.

As a pilot and fan of World War II aviation the film is right up my alley. But the amazing story of the Tuskegee Airmen is one that has shamefully not been shared with as many as possible. 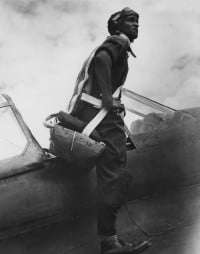 The Tuskegee Airmen were the first African American military aviators in the United States armed forces. During World War II, African Americans in many U.S. states still were subject to the Jim Crow laws. The American military was racially segregated, as was much of the federal government. The Tuskegee Airmen were subject to racial discrimination, both within and outside the army. Despite these adversities, they trained and flew with distinction. Primarily made up of African-Americans, there were also five Tuskegee Airmen that were of Haitian descent.

It’s not often that an audience breaks out into spontaneous applause following a movie but on Sunday the theater I sat in did just that.

The action film is well worth the price of admission and personally I’m grateful George Lucas worked so hard to share this wonderful story with yet another generation to admire the obstacles and handwork it took to break barriers and emerge as true American heroes.

Let me know what you think of it after you see it.