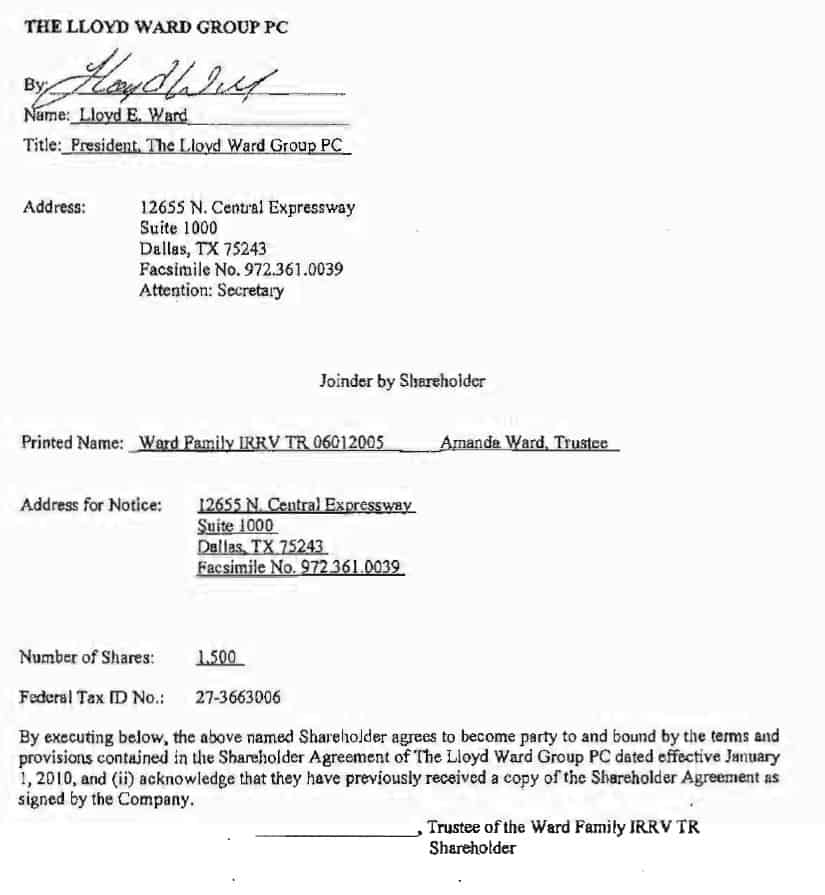 A tipster (send in your tips here) sent me a copy of documents filed on March 1, 2012 in a case Kelly Hawkins v. Lloyd Ward, Lloyd Ward, PC, Lloyd Ward & Associates, and Lloyd Ward Group, PC. The case was originally filed in Kansas.

The Texas application for turnover relief and appointment of a turnover receiver was filed by Charles Branham III from Branham Law Group in Dallas, Texas.

The Kansas case filed by Hawkins resulted in a default judgment against Lloyd Ward, Lloyd Ward, P.C., Lloyd Ward & Associates, and Lloyd Ward Group, PC after each failed to appear.

With the addition of attorney fees and court costs the total of the judgment is $114,094.95. 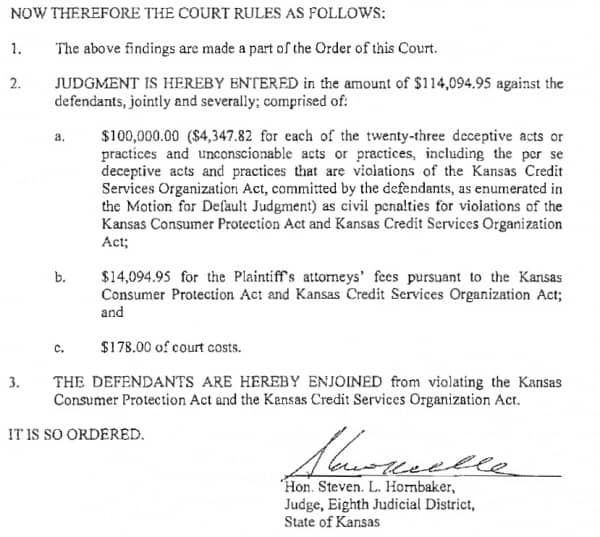 The underlying issues in the Kansas case involved the advanced fee debt settlement services that were sold to the Kansas consumer, Kelly Hawkins, on April 16, 2010.

The court documents indicate a receiver was asked to be appointed because “Lloyd Ward and his defendant entities have a history of taking judgments and refusing to pay them. Mr. Ward’s own testimony makes clear that, despite being an attorney and licensed to practice law in the State of Texas, he has no interest in satisfying final and unappeased judgments against him:”

This appears to be in reference to a $500,000 Connecticut civil penalty that was imposed on The Lloyd Ward Group PC. – Source

Q: Are there any states or states attorney general’s office that you’re involved in proceedings with?
A: I believe Connecticut and West Virginia.
Q: And the Connecticut one is the Connecticut Board of Banking, is that right?
A: I believe so.
Q: They have issued a $500,000 fine against you?
A: They have issued a fine of some amount. I couldn’t tell you how much.
Q: Have you paid that fine?
A: Absolutely not.
Q: Have you appealed that fine?
A: No.
Q: Do you intend to pay that?
A: No.

This mater has been referred to the Connecticut Attorney General office for enforcement. – Source

Of particular interest in the case was a document dated January 1, 2010 and labeled as a shareholder agreement. Share certificates appear to have been issued on October 14, 2010. – Source

According to this document, Lloyd Ward owned 15% but Kevin Devoto and Lloyd Regner each owned 42.5% respectively. Kevin Devoto is an ex-con and was convicted of securities fraud. – Source

What makes this shareholder relationship interesting is that The Lloyd Ward Group, P.C. is identified in the client agreement below as “Attorney” but yet in Texas I’m not aware that a non-attorney can be the owner of a law firm. I have asked the Texas Bar for clarification but at the time of publication no response had been received.

According to the American Bar Association:

(b) A lawyer shall not form a partnership with a nonlawyer if any of the activities of the partnership consist of the practice of law.

(d) A lawyer shall not practice with or in the form of a professional corporation or association authorized to practice law for a profit, if:

(1) a nonlawyer owns any interest therein, except that a fiduciary representative of the estate of a lawyer may hold the stock or interest of the lawyer for a reasonable time during administration; –Source 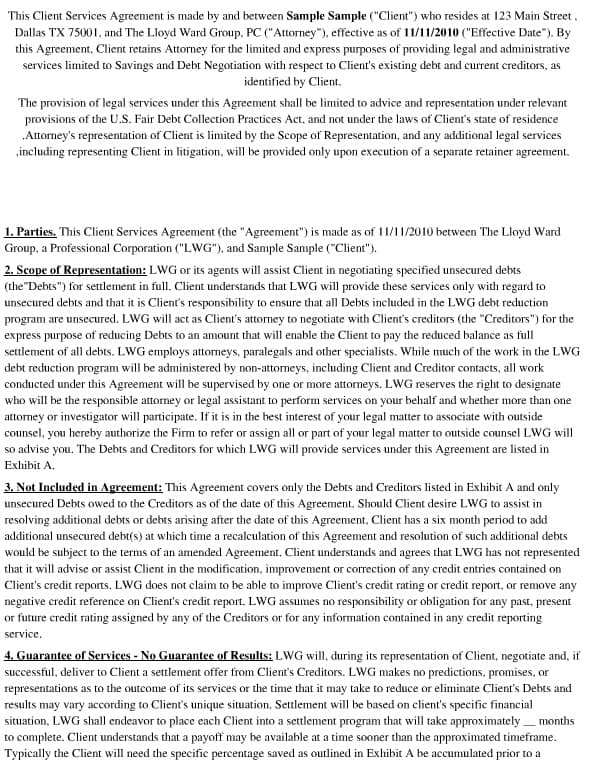 Ward’s statement that The Lloyd Ward Group, PC is “owned by myself,” appears curious as well. According to documents, Ward’s 15% share appears to be owned by the Ward Family Irrevocable Trust with Amanda Ward as the trustee. Yet Lloyd Ward is currently listed as the President and CEO. – Source 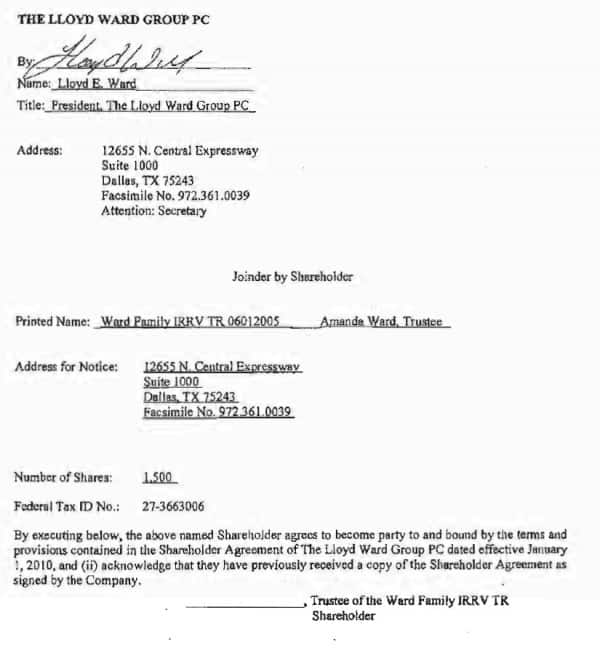 While this would help to explain why Ward would say he has no plans to pay the fine from Connecticut it makes it even more puzzling how The Lloyd Ward Group, PC could sell debt settlement services under the auspices of being an attorney model when no attorney was actually involved in it since the company ownership appears, to consist of Regner, Devoto, and the trust.

See also  We Went With Lloyd Ward and Best Debt Options. But We Are Not Satisfied and Want Our Money Back. - Parent

Just for clarity, the documents state that Regner’s shares are actually owned by Lloyd Regner and Stephanie Regner. – Source

If we believe that Lloyd Ward, PC, Lloyd Ward & Associates, Lloyd Ward Group (LLC or PC) are all separate legal entities (even with no proof of existence of Lloyd Ward Group, LLC), then how in the world is the average consumer going to be aware and informed of this when documents like this are presented to them? 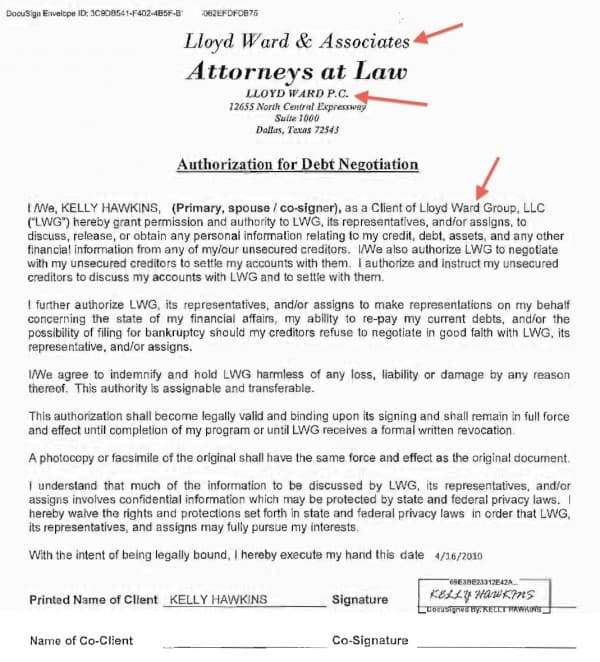 While the form above proclaims this is by “Attorneys at Law” there is no evidence I can find that shows Lloyd Ward Group, LLC exists or that The Lloyd Ward Group, PC is a valid law firm when it is owned by non-lawyers and an ex-con.

And the confusion continues from the same case. As part of the same client agreement the consumer, Hawkins, was given the following form. Lloyd Ward, PC is a new entity, not identified on the previous page. This part of the client agreement also introduces Lloyd Ward as an individual and states that Lloyd Ward Group, LLC is the “attorney” in this agreement and is a Texas Limited Liability Company, which does not appear to exist. Additionally, on the date of this agreement, April 16, 2010 the domain name referenced in this agreement, lloydward.com, was registered to a Llody Ward at 9441 LBJ Freeway. – Source

Between the two pages of the client agreement, this seems to bring the total number of separate entities with similar names to five.

The documents filed in relation with the Kansas case say that “the Judgment Debtors own property which is not readily leviable as more fully described below. – Source

In his deposition attached to the Kansas case, Ward states he has invested money in companies with Lloyd Regner and Kevin Devoto that have something to do with auto warranty business.

Q: All right. What ownership do you have in the Auto Warranty LLC? [Ed: Potentially LRKD Auto, LLC?]
A: I don’t have an ownership interest. I have invested funds in it.
Q: Do you have a right to receive any profits or proceeds from that entity?
A; To the extent that there’s net profits, I believe I do.
Q: Okay. And how much of a percentage, or however it is calculated, do you have a right to receive profits from?
A: There would be either 10 or 15 or 20 percent. I’m not sure. – Source The client agreement in the Kansas court case says it is between the client and Lloyd Ward Group, LLC. A current search of Texas records cannot locate any entity by that name. 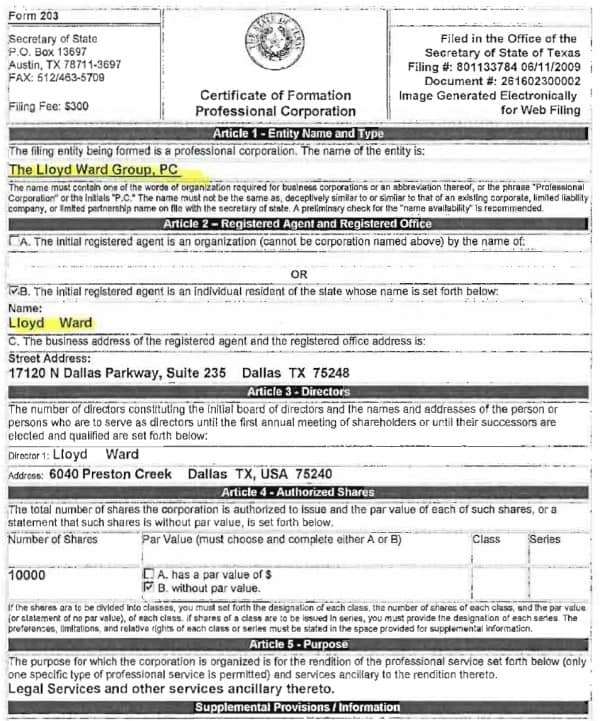 The nearest entity they have is “The Lloyd Ward Group, PC” of which Lloyd Ward personally is the director and chief executive. – Source

And Just When You Thought This Could Not Get More Confusing

As I was wrapping up this article I received a confidential tip that claimed Camden Debt Solutions is also associated with Lloyd Ward. I took a look and Lloyd Ward & Associates, Inc. is the registered agent for the company and a former employee of Ward’s, Ashley Eichelberger from Silverleaf Debt Solutions owns the domain name. – Source, Source

Q. Okay. Are Chris [Garrison], Ashley [Eichelberger], Jordan [Olsen] or Feldon [Warren] lawyers?
A. No.
Q. And I want to be clear: In your mind, these people that worked in the SilverLeaf offices, they were your employees?
A. Yes. – Source

The Camden Debt Solutions even presents Lloyd Ward Group on their site. 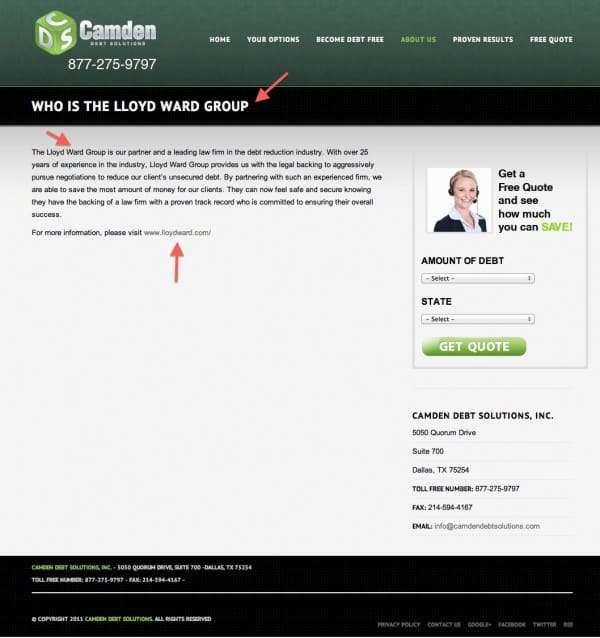 And Let’s Not Forget LloydWardLaw.com

While not included in the Kansas action, another Lloyd Ward related entity was previously reported on here. See this article about LloydWardLaw.com.

In the interest of disclosure, Lloyd Ward has filed suit against my wife and I for previous reporting and the case is ongoing.

Personally I have absolutely no vendetta against Lloyd Ward et al. I am certain the court case he filed against my wife and I will run it’s course.

But just because he has filed a lawsuit against us is not a reason for me to not report on items and issues in the debt relief industry that involve Lloyd Ward. I want to clearly state, this article is posted because it is news and of interest to the debt relief world and not as some form of retaliation for the lawsuit filed. I did not seek out the original tip and information.

You can read the full file and documents I was given that create the foundation of this report, here.