The suit filed by Legal Helpers Debt Resolution alleges CDS has 4,000 consumer accounts they were setup incorrectly and failed to designate Legal Helpers’ as having control over the Global account.

The lawsuit is brought in an attempt to “correct the set-up of the Clients’ accounts with Global.”

It’s interesting to now see Legal Helpers so insistent that the consumer relationship is with them and not the affiliate or backend service company. In the suit LHDR even cites, “According to the Illinois Rules of Professional Conduct, “with respect to a non lawyer employed by or associated with a lawyer…a lawyer having direct supervisory authority over the non lawyer shall make reasonable efforts to ensure that the person’s conduct is compatible with the professional obligations of the lawyer.” See Illinois Rules of Professional Conduct, Rule 5.3.”

Well the whole effort went sideways when Global Client Solutions “refused to acknowledge Legal Helpers’ Amendment to Instructions citing that CDS maintains that the latter should remain in control of the Client Accounts since CDS was originally named as a “Sponsor” for the Clients in several of that DSA Agreements.”

LHDR says that upon the termination of CDS, LHDR had to be named as in control of the client accounts since CDS is not a law firm and cannot act as a lawyer for the client.

Legal Helpers Debt Resolution asked the court for a Temporary Restraining Order so they could get the client accounts back.

LHDR even claims, “Legal Helpers has a duty to protect, manage, and oversee the interests of its clients.”

CDS goes on to say that GCS has no role in this other than as a spectator and that it “intends to remain neutral and leave this matter to the companies and/or courts for the ultimate determination as to the dispute.” – Source

Henson goes on to say that they were wrongfully terminated by LHDR over a demand by LHDR for “two large “contribution deposits” to fund potential settlements of the Illinois AG Action and Washington Class Action.”

“CDS and the other [backend companies] balked, because, among other things, there was no basis for the amounts sought by Legal Helpers from CDS (and the other administrators). No settlements had been reached. Legal Helpers would provide no information or accounting as to how it determined the amounts of the purported “contribution deposits.” The amounts demanded were completely arbitrary. Because of this, CDS, along with every other administrator, could not agree to accede to this completely unreasonable and unsupported demand.”

“Legal Helpers thereafter apparently concocted a new plan to seize the fees that CDS and others were earning as a way to fund Legal Helpers’ liabilities. On March 30, 2012, Legal Helpers summarily terminated all of its service providers’ (including CDS) allegedly “for cause” on the pretext that each administrator had breached its contract with Legal Helpers in the exact same way.”

Following the Termination of CDS, Legal Helpers Runs Into Difficulties

Alleged email LHDR sent to clients of CDS saying LHDR was now in control of the client account. 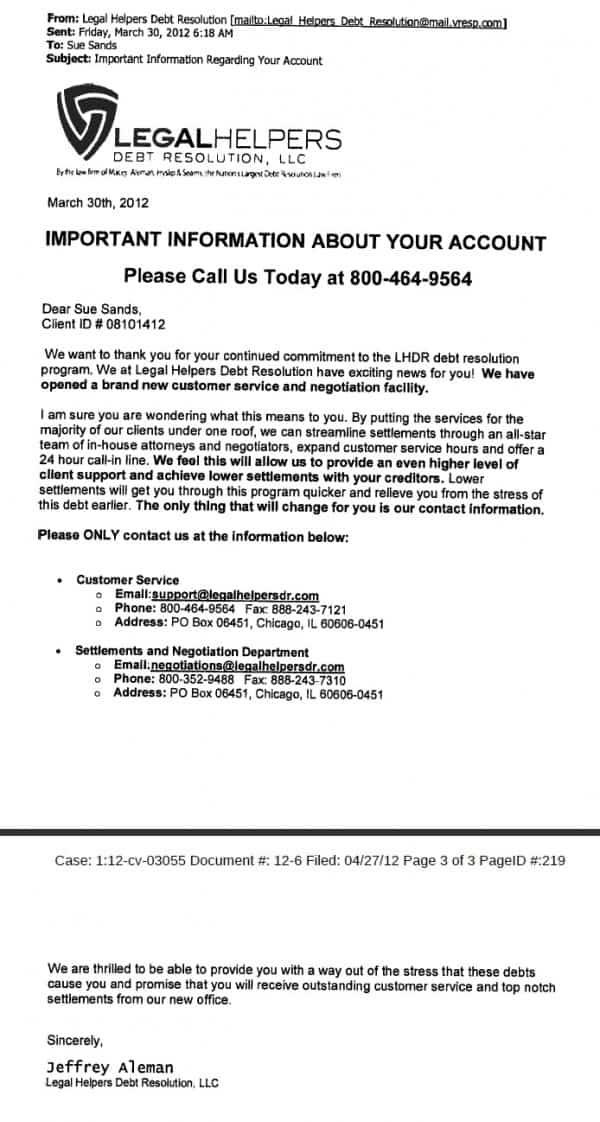 You can read the full declaration of David Henson, here.