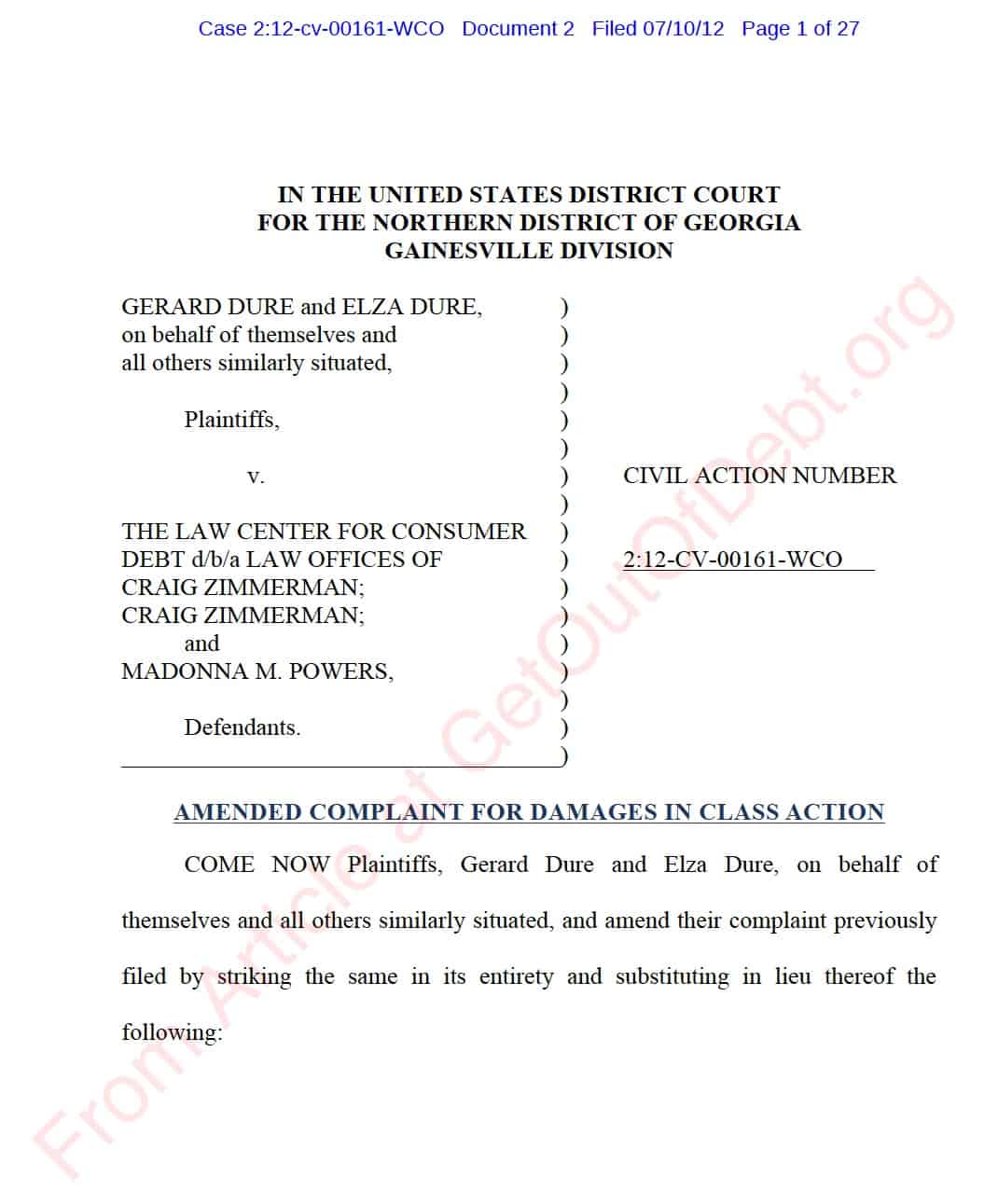 The Georgia class action suit alleges the Denendants violated the Georgia Debt Adjustment Act that strictly regulates the business of debt adjusting and specifically limits the charges, fees, contributions, or combinations thereof that debt adjusters may charge to consumers.

The Law Center for Consumer Debt and the Law Offices of Craig Zimmerman are located in Santa Ana, California.

This suit seems to touch on a number of issues we’ve covered previously. For example, while the Defendant’s were soliciting business in Georgia, they were allegedly not registered or authorized to do business or practice law under the laws of the State of Georgia.

On the other hand, Brenda Powers is an attorney licensed to practice in Georgia and is located in Fannin County, Georgia.

The suit alleges the Defendant’s are in the business of providing “debt settlement” services for a fee, which falls under the laws of Georgia and were not in compliance with debt adjusting laws.

From the suit we learn:

“Defendants represented that they would analyze Plaintiffs’ financial situation, negotiate with Plaintiffs’ creditors to lower their interest rates and principal amount owed, and reduce their debt. Defendants made the same representations to the Proposed Plaintiff Class members.

A debtor participating in Defendants’ Debt Settlement Plan (“DSP”) pays a certain sum, determined by Defendants, monthly into a bank account dedicated to accruing funds for future settlement of debts “enrolled” in the DSP, thereby diverting all of the debtor’s monthly payments directly to creditors.

The apparent purpose of the DSP program is to “sweat-out” a debtor’s creditors by withholding payments towards the debts for several months, causing the debts to enter default, and/or forcing the original creditors to “charge-off” the debt and sell the debt to a “junk” debt buyer who purchases the debt for a fraction of its pre-default value. Once the debt is in default, charged off, or sold to a debt buyer, Defendants will allegedly attempt to negotiate a settlement of the amount owed at a discount of the originally owed amount.”

As we’ve talked about a number of times, giving accurate and realistic projections and estimates based on actual client performance is critical.

“Defendants represented through written estimates that they had historical experience in achieving similar results for consumers, which representation was materially false.

Defendants, or their agents, charged and accepted from the Plaintiffs approximately $6,308.47.

Of the money Plaintiffs paid, and was received by the Defendants, Defendants retained 10% of the enrolled debt, or $4,295.47, as their “fee” for the proposed debt adjusting service The money accepted by Defendants from Plaintiffs exceeded 7.5 percent of the amount paid monthly by Plaintiffs for distribution to their creditors in violation of OCGA § 18-5-2.

The Defendants failed to distribute all funds received from the debtor, less authorized fees, within thirty (30) days in violation of OCGA § 18-5-2(a).”

We’ve also talked in the past about the fiduciary duty that debt relief providers have to consumers to act in the best interest of the consumer when providing debt adjusting services.

The suit alleges, “The Defendants represented to the Plaintiffs and Plaintiff Class Members that the Defendants would provide sophisticated debt settlement services in negotiating a resolution of the Plaintiffs’ debts based on a track record of obtaining similar results for other clients.

Based upon the representations made by the Defendants, the Defendants had a fiduciary duty to the Plaintiffs and Plaintiff Class Members to act in their best interest and to provide competent advice regarding the restructuring of the Plaintiffs’ credit obligations, and to abide by the law.

READ  I'm Working With Craig Zimmerman and His Debt Relief Group and Want Out. - Anna

As a result of the Defendants’ breach of fiduciary duty, the Plaintiffs and Plaintiff Class Members incurred damages, and are entitled to damages for their losses, attorney’s fees, costs of this litigation.”

The case was filed by: