A tipster (send in your tips here) alerted me that last week, Monica L. Montgomery, Esq, withdrew as the attorney representing Rampart MMW in their recent bankruptcy filing they sold access to consumers in to hopefully stop home foreclosure.

Montgomery filed the chapter 11 bankruptcy on June 20th and I previously covered that filing and a former client spoke out about the fees and approach taken. You can find those posts in the related articles below.

The motion to withdraw is signed by Richard Moran as vice president for Rampart MMW. Moran is also known as Pastor Rick from Omni Home Solutions. – Source 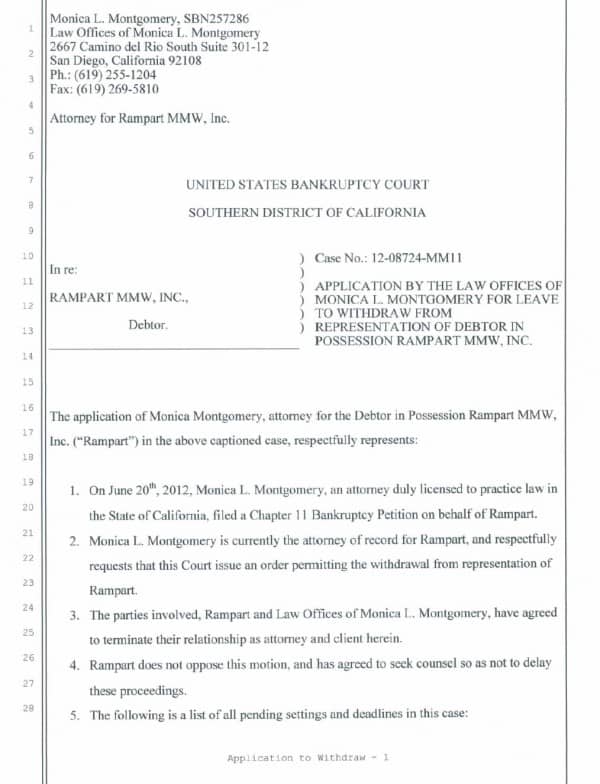 On the same day a supplemental report was filed in the case that states a John Carter was paid $10,000 by Rampart for consultation but does not list a date it was paid. Carter is most likely the same attorney that was allegedly disbarred in Nebraska that was involved in this approach.

Richard Moran and Lawrence Day are listed as having taken compensation from February to June, 2012 of $39,823. – Source

It appears under this filing someone is getting their car payment paid, maybe two. There is a charge for $601 to Chase Auto Finance and $811 to U.S. Bank for secured creditors. – Source

At the same time I was alerted to this change in the case I was also sent a copy of a complaint filed with authorities and the Internet Crime Center from an alleged former client.

He said if we named him as co-trustee of our home and paid them $7900 for court costs/legal fees plus $1000 a month until it was decided, they could get the judge to stop foreclosure proceedings because his trust would declare bankruptcy and then force the banks to refinance our loan or forgive the mortgage debt altogether because the banks are engaging in illegal activity with our mortgage loans.

They provided legal cases and legal means as to why this was possible. We paid them $7900 to file the bankruptcy in May of 2012. It was never filed. Our home was slated to be foreclosed on June 5, 2012. Fortunately for us, Bank of America came back and said we qualified for the DOJ special program they have now so we’re working to see if we can modify our mortgage and save our home. But if we cannot, it will be put back in foreclosure and auctioned August 7, 2012.

We went to Michael Lawrence at the end of May and asked to have our money refunded because they did not file the suit in time. They said the money had already been spent on lawyers fees but since the lawyers filed nothing, we know they are scamming people.

Michael Lawrence asked to be paid in an account at Wells Fargo called Masdata Trust. We were to deposit funds into that account totaling $7900 which we did. I have canceled checks and deposit receipts as well as the trust account information to prove it.

I have a contract we never signed with Rampart, MMW. I have emails describing what they promised. And my concern is that there are people in much worse shape than us who are being completely scammed by these people. Michael Edwards is the "marketing" guy for Michael Lawrence. He has several web sites including www.yourremedyisinthelaw.com, www.americansrestoringamerica.com, and about thirty others.

He is the "recruiter" for this program. They are also on Freedom Radio on the Internet on Sunday or Monday evenings at 9p. They recruit people into their program that way as well. They have not given nor will they provide the name of the attorneys they are supposedly working with.

They say the reason for the hold up is the trustee is demanding more things than they originally thought but why they can’t provide the name of the attorney is unbelieveable. They also have not provided the names of the other clients they have.

They say that they are offering a "membership" into their program where they are the teachers and we are the students they are instructing about how to clear up our finances. Michael Edwards lives in Florida. His phone number is 386-804-1234. His email addresses are Scotsman@YourRemedyIsInTheLaw.com and theescotsman@gmail.com. Michael Edwards assistant, Martin Michel’s phone number is 386-956-4241.

They are part of this elaborate scam as well. Martin assists in filing documents supposedly and Michael markets and collects the money. I know for certain Michael Edwards Keith lives in Florida. The Fort Worth address I provided for Michael Lawrence Day is correct. I do not have an address for Martin Michel. These guys are total scam artists and need to be exposed and pay for the fraud they are commiting against people about to lose their homes. It’s sickening that there are people out there like this but they must be stopped. I would be willing to press charges if there are any criminal or civil charges that could be filed.”