We recently received a tip from a reader that made some claims about Consumer First Legal Group.

The tipster (send in your tips here) said:

“im sure you already have the jump on a few things. but in case you dont

LHDR – The Mortgage Law Group now go by “Consumer First Legal Group”. They are playing the shell game due to the heat from LHDR/TMLG troubles. One of their main staffer attorneys Kelly jumped ship before the house of cards came tumbling. Steve Vanderhoof (known for his wild partying) jumped ship for various reasons only to be replaced by a guy named James Van elswyk with a noted criminal past for drug trafficking amongst other issues (http://news.google.com/newspapers?id=tc5JAAAAIBAJ&sjid=gBANAAAAIBAJ&pg=4537,5015940&dq=james+van+els+wyk&hl=en).

Consumer First is a partnership with a Harold Stafford of WI – with what appears to be his own host of past problems: http://www.jsonline.com/news/wisconsin/109563959.html – Source

I make no claims about any of the information the reader sent in and their content is THEIR content, but I did want to take a look at the claims made and find out what I could learn.

According to records from the Wisconsin Department of Financial Institutions, Consumer First Legal Group, LLC was formed on November 14, 2011.

The registered agent for the company is Harold Eugene Stafford at 8253 Mayo Drive, Suite 309, Madison, Wisconsin 53719. 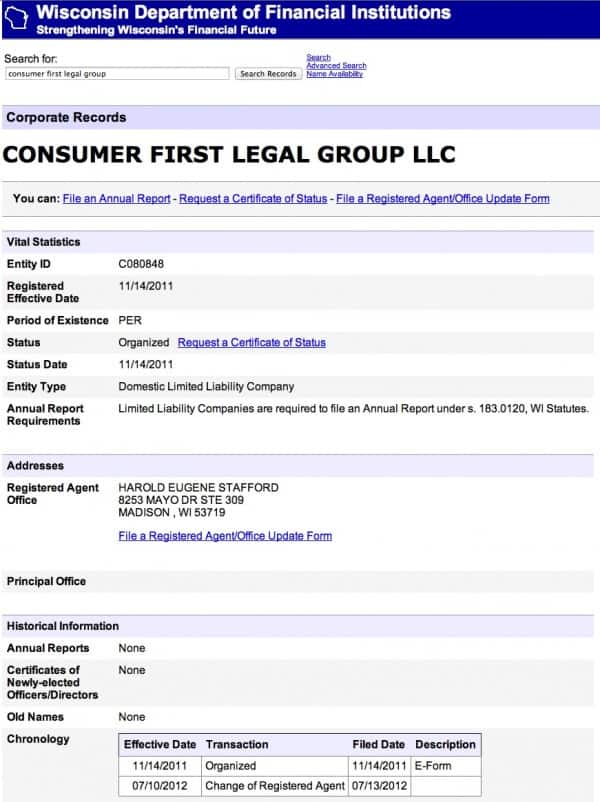 From the story the tipster (send in your tips here) linked to about Harold Stafford it looks like he was resoundingly praised for his getting his life back on track and earning a law degree despite the troubles he got into early in his life. I’d be hard pressed to hold any of that against him.

According to that same article:

But most damaging was the felony conviction. That’s what brought Stafford to the state Capitol that Saturday morning in 1996.

I remember the board members were extremely supportive of his pardon request, much more than they were of most of the 16 other convicted thieves, drug dealers, robbers and other offenders who stepped up to the microphone that day. Their reasons for seeking a pardon varied. Some just wanted to be able to possess firearms so they could hunt again. Some swore they planned to run for office someday and needed to be cleared first. Some, like Bembenek who is in failing health, simply did not want to die as felons.

Stafford himself was facing his own mortality. A few months before his appearance before the board, he had a cancerous brain tumor removed. He was battling vision problems, slurred speech and partial paralysis in his arms.

Wearing an eye patch and struggling at times to form words, Stafford told the board, “I really worked hard to change my life and become an upright person.”

Several weeks later, Stafford got a phone call. A secretary told him to please hold for Gov. Tommy Thompson.

“He told me that he reviewed it, and the board had unanimously suggested that he go along with the pardon, and he was happy to do so. He said congratulations and I wish you well,” Stafford, now 50, told me when I reached him last week.

Pardon in hand, Stafford graduated from law school that same year and passed the bar exam in Wisconsin. He took a job at a law firm in Chippewa Falls, where his father was a judge. His past was an open book.

“They knew all about me and what I had done subsequently. Going to law school spoke for itself,” he said.

In 1998, he moved back to Minnesota and took a job as a legal consultant for a company offering employee assistance programs. Then, in addition to private practice and criminal defense work, he became a field attorney for a national law firm. Two years ago, Stafford moved to Madison where he lives now.

He left the national firm this year and has started the Consumer First Legal Group, which has 65 lawyers in most of the 50 states, he said. They offer a la carte legal services for people who require help drafting a divorce petition, preparing bankruptcy paperwork or other needs.

“The population we serve are less fortunate than most people. There is a real unmet need for providing legal services to those folks who can’t afford an expensive lawyer,” Stafford said.

So he’s passing along the benefits from the second chance he received.

So just on the face of it it appears that Consumer First Legal Group was formed some time back in 2010.

The State Bar of Wisconsin does say that Harold E. Stafford is licensed to practice law in Wisconsin. – Source

According to the BBB the company maintains an A- rating and has had no complaints. – Source

The domain name for Consumer First Legal Group was registered on October 28, 2011 and lists Harold E. Stafford as the administrative contact at 8253 Mayo Drive, Suite 309, Madison, Pennsylvania 53719. (Yes, it does says Pennsylvania.)

I did locate a couple of web statements by people that shed some additional information on this.

This company is promising people that they will help them get a loan modification and they making these people pay them monthly payments when they can’t even pay their mortgage at the end most of them lose their homes anyways, my sister paid over five thousand dollars and they did not help help her she never spoke with an attorney or met anyone face to face the company has change names repeatdly they were The mortgage Law Group when the arizona attorney general shut them down so now they’ve change to consumer first legal group with an office in Delray Beach FL that have Madison, WI phone numbers and all the client’s mail go to Madison. – Source

Please be aware that Consumer First Legal Group is also known as THE MORTGAGE LAW GROUP!! This Company has scammed 1000s of people, please look up The Mortgage Law Group to see how many people that have hurt.

They claim that they are located in WI when in fact their processing center is located in Delray Beach, Florida and their sales office is out of Chicago at the Mortgage Law Group headquarters.

They claim to offer homeowners solutions to help save their home but that is untrue, anyone can do their own loan modifcation for free. All they do at the processing center is request documents and every time you send them they loose it. They have already scammed over 500 people. Please do not be one if them! – Source

But here is where it gets interesting.

Steve N. says he is a mortgage consultant and sales for Consumer First Legal Group, LLC and is located in Chicago. – Source

If anyone has any information to verify the claims made, please post that information in the comments section below.