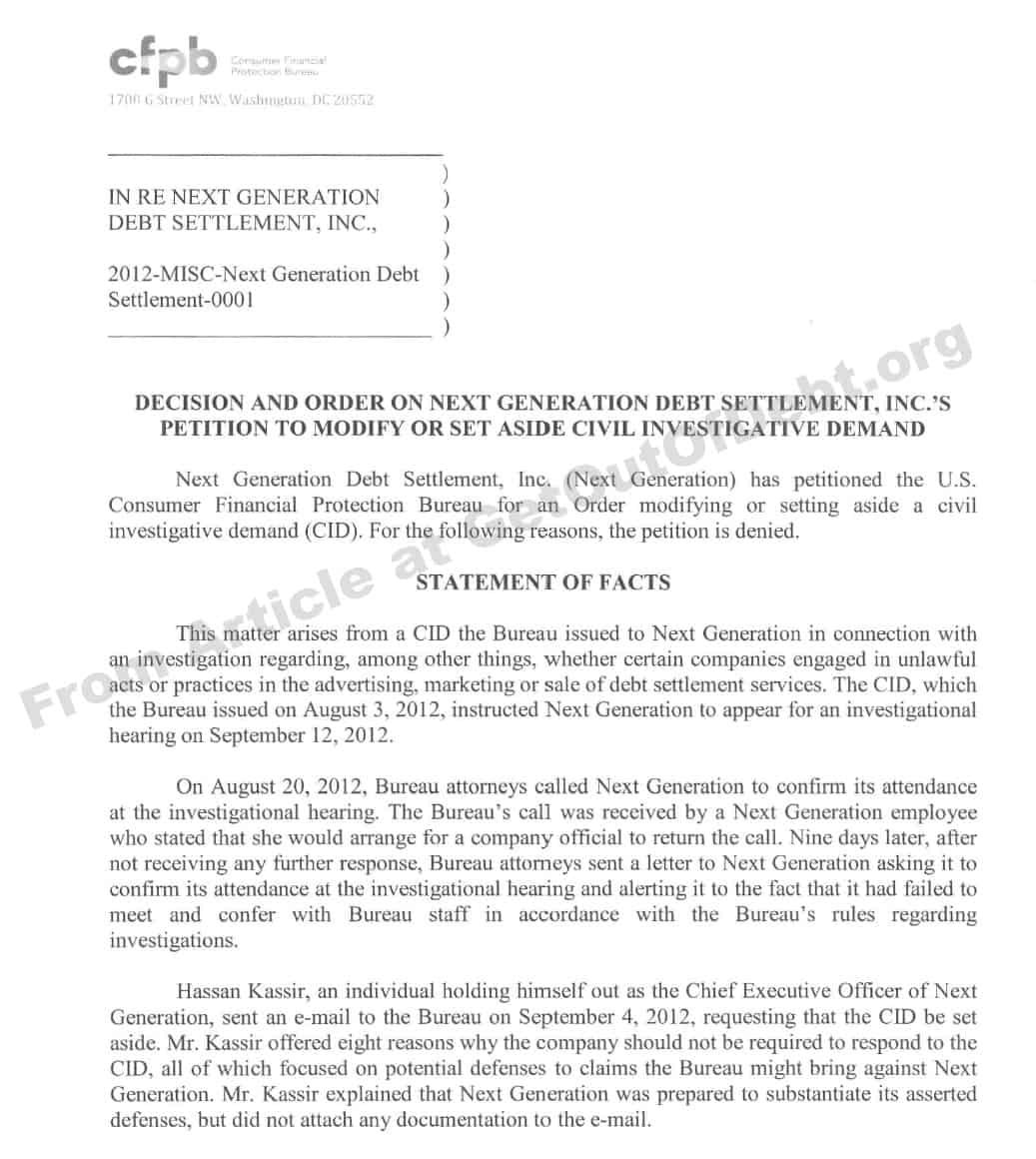 In what is the first big sign that the CFPB is tackling debt settlement, a tipster (send in your tips here) sent me a copy of a letter from the CFPB to Next Generation Debt Settlement. The letter states the Consumer Financial Protection Bureau issued a Civil Investigative Demand letter on August 3, 2012. The letter asked Next Generation Debt Settlement to appear for an investigational hearing on September 12, 2012. Sounds like fun (sarcasm).

The issue is reported as involving what we will have to call the usual investigation, “unlawful acts or practices in the advertising, marketing or sale of debt settlement services.”

Apparently the CFPB gave Next Generation Debt Settlement one of those dentist office reminder calls to confirm they’d make the appointment.

The Bureau’s call was received by a Next Generation employee who stated that she would arrange for a company official to return the call. Nine days later, after not receiving any further response, Bureau attorneys sent a letter to Next Generation asking it to confirm its attendance at the investigational hearing and alerting it to the fact that it had failed to meet and confer with Bureau staff in accordance with the Bureau’s rules regarding investigations.

Hassan Kassir, an individual holding himself out as the Chief Executive Officer of Next Generation, sent an e-mail to the Bureau on September 4, 2012, requesting that the CID be set aside. Mr. Kassir offered eight reasons why the company should not be required to respond to the CID, all of which focused on potential defenses to claims the Bureau might bring against Next Generation. Mr. Kassir explained that Next Generation was prepared to substantiate its asserted defenses, but did not attach any documentation to the e-mail.

The CFPB was none too happy about Next Generation Debt Settlement blowing off the meeting and it’s poor response.

Even if Next Generation had satisfied the Bureau’s rules, its petition has no merit. The petition asserts substantive defenses to charges the Bureau has yet to assert, arguing that the company has not engaged in direct consumer marketing or telemarketing or committed other acts that might violate federal consumer financial law. But facts relating to whether Next Generation is covered by or has violated a federal consumer financial law are not defenses to the enforcement of a CID, even if they might eventually be defenses to legal claims contemplated in the CID. The Bureau may conduct an investigation “to discover and procure evidence, not to prove a pending charge or complaint, but upon which to make one if, in the [Bureau’s] judgment, the facts thus discovered should justify doing so.” – Source

The request to set aside the CID was, wait for it, denied. CFPB Director, Robert Cordray ordered that Next Generation Debt Settlement was to appear at an investigational hearing before October 15, 2012.

There is no word on what happened at that meeting.