In what must certainly be a terrible embarrassment for the American Fair Credit Council, AFCC, one of their members was criminally indicted today by the Manhattan U.S. Attorney.

As of now, Mission Settlement Agency is still listed as a proud member of the AFCC. – Source

Mission also boldly uses the AFCC logo on their website. 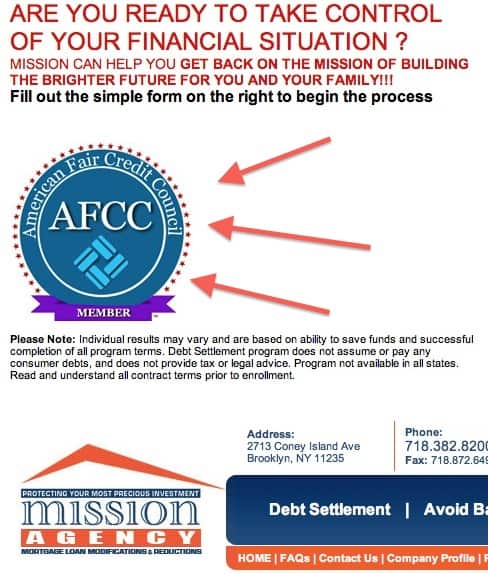 More importantly, the criminal charges were also filed against an attorney as well, who probably felt he was exempt from the Telemarketing Sales Rules and could get away with it. It’m sure that’s going to be shaking some cages around the country.

But if the AFCC was actively monitoring the actions of its members, then how in the world did they let Mission get so far afield?

I’ve directly raised issues with the activities of Rescue One with AFCC members and not a thing has happened to Rescue One, who is still a member as well.

According to the U.S. Attorney, Mission engaged in the following behavior.

Since its inception in 2009, MISSION has offered “debt settlement” services to financially disadvantaged individuals who were struggling or unable to pay their credit card debts. Like other purported debt settlement providers, MISSION held itself out as a company that could successfully negotiate to lower the overall debt its customers owed to credit card companies and banks. LEVITIS operated and controlled MISSION which, at varying times, had offices in Brooklyn and/or Manhattan.

The defendants targeted financially disadvantaged individuals known to be struggling to pay credit card debt and reached out to them through telemarketing and mail solicitations. Thereafter, MISSION’s sales representatives typically spoke to the prospective customers on the phone, describing MISSION’s work and its ability to renegotiate debt. Where an individual ultimately expressed an interest in engaging MISSION, MISSION then had the individual enter into a contract.

Overview of the Fraud

From 2009 through May 2013, the defendants systematically exploited and defrauded over 1,200 financially disadvantaged individuals across the country who were struggling to pay their credit card debts. The individual defendants falsely and fraudulently tricked them into becoming MISSION’s customers by making materially false and misleading statements about MISSION’s ability to help settle their debts and about the fees MISSION would charge in exchange for that help.

Specifically, the defendants commonly lied about and/or concealed MISSION’s fees, falsely stating both verbally and in their written solicitations, that MISSION would charge a mere $49 per month and/or that there would be no up-front fees. In fact, MISSION took thousands of dollars in up-front fees from funds that its customers had set aside because they had been told the funds would be held in escrow and used to pay creditors. The defendants also deceived prospective customers by fraudulently promising that MISSION could help slash their debts – typically by 45% – when, for the majority of customers, MISSION actually did little or no work, and failed to achieve any reduction in debt whatsoever. And the defendants deceptively created an air of legitimacy for MISSION’s business by falsely suggesting that it had affiliations with the federal government and with one of the three leading credit bureaus in the U.S.

Overall, MISSION had approximately 2,200 customers who paid a total of nearly $14 million in connection with its purported debt settlement services. Of these funds, MISSION took over $6.6 million in fees, while paying only approximately $4.4 million to customers’ creditors. For over 1,200 of its customers, MISSION took fees totaling nearly $2.2 million, but never paid a single penny to the customers’ creditors as payment for any negotiated debt. LEVITIS used the money that MISSION took from its customers to pay for things including the operating expenses of a restaurant/nightclub he controlled, lease payments for two different luxury Mercedes cars, and credit card bills for his mother.

In conversations with prospective customers, the defendants represented that customers would be asked to make affordable monthly payments for a set period of time, that these payments would be held in escrow by a third-party payment processor until MISSION had negotiated down the customers’ debt obligations, and that the money held in escrow would then be used to pay the creditors. The defendants further promised that MISSION would only charge a nominal monthly fee of $49 in exchange for its efforts, and they often explained that MISSION would charge an additional fee only if it succeeded at obtaining a greater reduction in debt than what had been promised. They also claimed in both their written solicitations and in scripted phone calls that there were no up-front fees.

In reality, in addition to the $49 monthly fee, MISSION also charged an up-front fee equal to as much as 18% of the debt the customer owed. MISSION deducted these fees from the monies that customers paid to the third party payment processor, in accordance with a monthly payment plan it established, and that customers understood would be held in their escrow accounts and used to pay their creditors. Instead, MISSION regularly took as fees for itself all of the funds that its customers paid to the payment processor during the first three months of their contracts with MISSION. This was done in order to insure that the company would receive up-front fees before any of the customers’ debt was even paid down.

The defendants typically promised prospective customers that MISSION would negotiate a substantial reduction in their debt, promising prospective customers that they would have to pay only 55% of the amount owed to creditors. When potential customers questioned that assertion because it sounded too good to be true, a written script directed sales representatives to tell them: “The creditors today are content to get the settled amount in light of all the bankruptcies, charge offs, and bad debt out there today.”

This assertion and the underlying promise were false. In reality, MISSION did little or no meaningful work to negotiate reductions in debt for many of its customers, and the sort of result MISSION was promising prospective customers was substantially more favorable than the results MISSION typically achieved for prior customers.

The written script also instructed sales representatives to promise potential customers that if they worked with MISSION, their credit scores would ultimately go up. The script said, “Your credit score will go down in the short term while the accounts are put into position for settlement. Then your score will go up as the payments are made and ultimately your score will be significantly higher.” This was also untrue.

The defendants also made material misrepresentations to prospective customers about MISSION’s relationships and affiliations in a deceptive effort to make MISSION seem more credible and trustworthy. For example, in an effort to attract business, MISSION sent a solicitation letter to prospective customers that falsely suggested that it was acting on behalf of or in connection with a federal governmental program. The letter included an image of the Great Seal of the United States and indicated that it was coming from the “Reduction Plan Administrator” of the purported “Office of Disbursement.” However, the only phone number and address provided in the letter belonged to MISSION, and MISSION did not have any relationship with any federal agency, nor was it operating in connection with any federal program.” – Source

Can the AFCC Protect Consumers?

Based on the extensive information that has been released today about Mission Settlement and the issues I’ve raised about Rescue One, can the AFCC be trusted as a trusted industry resource?