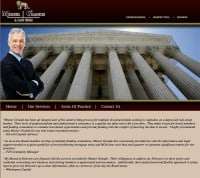 We were contacted by a company who sent us some mail and said that we qualified under a special government program that allowed us to file a lawsuit against our bank because they researched our loan and found that it was robo signed by the bank. They said the case would be over in a month or two that they would own the home after the lawsuit and they would sell it back to us on a very cheap mortgage.

What can I do about this? How can these lawyers send letters out to people and tell them they have guaranteed law suit that is a winner and take money and not do anything? How do I file complaints about the lawyers there? The main Lawyer is Howard Feinmel and the other lawyer, the only one I spoke to is a real jerk and his name is John Sabia. When you speak to him he likes to talk down to you and try to make you feel small even though he is the one robbing people.

I have called them many times and get nowhere because they say that I closed the case but it because they lied about everything and there never even was a lawsuit. When you call this company it doesnt even seem like a law firm and many times there phone has been disconnected.

Consumer
This is information that was submitted by a third party and not generated by GetOutOfDebt.org or Steve Rhode.
Latest posts by Consumer (see all)
See also  Larry Diodato Screaming At Me Makes Me Want to Know More About August Belmont and Company