Last year I predicted it would be a record year for IVAs. There had already been more than 40,000 Individual Voluntary Arrangements, the most-used personal insolvency procedure in England and Wales, in the first nine months of the year and here at ClearDebt we were pretty confident the total for the year would top 50,000. 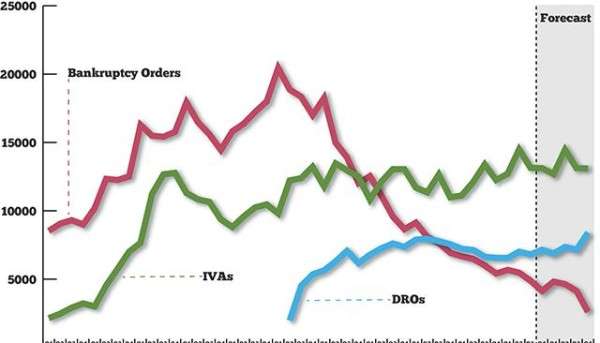 Well, on Thursday January 27 the Insolvency Service will issue its statistics for the whole of 2014 and we’ll find out. Our estimate is that there will have been 53,649 (non-seasonally adjusted) IVAs in the whole of 2014.

What is your prediction for how many IVAs there were in 2014?

Leave your estimate in the survey on our blog and the nearest estimate will win £100 towards your nominated charity (we’ll keep your email address secret).

More seriously, our prediction for 2015 is that IVAs will stay at this level (or decline slightly) whilst Debt Relief Orders (DROs) march ever upward, mirroring the continuing fall in bankruptcies. And that’s even before the new DRO thresholds come in in October this year – that will see the two procedures diverge even further.​

Realistically though, who can tell what the year will bring – especially when there is a general election in it. Whichever party(ies) form(s) the next government we doubt their policies will do much to reduce personal debt, or the fact that eight out of ten debtors do nothing to resolve it.

We hope a future government may reconsider bringing in the Simple IVA, which could become an accessible procedure that offers real debt relief and simple administration – and which could see the numbers of informal Debt Management Plans (which are not recorded in the Insolvency Service’s figures but which represent the majority of UK debt plans) plummet.

*Notes on the data: Statistics in this article are taken from the Insolvency Statistics up to Q3 2014.