Next day (January 12, 2015) a Guy named Ron called me and asked me if I had time to talk about my student loans and that it would only take 10mins. I was busy so I asked for him to call me the next day.

Ron from TFSCGroup called me on Wednesday and mentioned that I would qualify for the Obama Student Loan Forgiveness Plan. He asked for my my full name and address. Also asked for my social security number. I asked why he needed my social and he mentioned that it was necessary to prove that I was me and for my forbearance request form. He then asked for my pin for my student loans. (at that time I was not aware that he must have been accessing my studentloans.gov account)

He then mentioned that he wasn’t sure if I would qualify for the forgiveness plan because my total loans were under $30,000. He then put me on hold. After 20 seconds he then said that I qualified for IBR (Income Base Repayment)$171.18/month for 13 years and then after 13 years the rest of my loan would be forgiven.

I was so excited that I was going to lower my payments so I said lets do this. Ron mentioned that there was a “loan closing cost” of anywhere between $600-$1100 depending on my income.

I started asking him questions about his company and Ron mentioned that TFSCGroup was like the H&R Block of student loans. and the “loan closing cost” was to pay them to do all the paperwork. After all said and done, my loans would be with a 3rd party trust company called studentassitplus.com

He then asked me how much I made. I said about $1200 every two weeks. He then put me on hold. After 20 seconds, he got back on the line and said that he got me to pay the low price of $599 for the loan closing cost. Ron then gave me payment options: either by checking account or credit card. I chose checking account and one easy payment. He then asked me for my routing number and account number to charge the $599 to.

He then sent me an electronic document via email which I was rushed to sign and send back. I was so caught up in the rush and excitement that I signed away. He then said that I needed to talk to their processing department manager (Don Kaiser) which with Don I agreed to certain statements that he verbally stated. (pretty much me saying that I agree with what Ron mentioned throughout the whole phone conversation. I said yes to everything.

Don then mentioned that there was one last thing and that he would email me a document for me to hand sign and that I need to send that and two paystubs back to them.

On Friday, 1/23/2015 I had a gut feeling that I was being scammed, so I decided to look up all their websites and company information that they gave me: TFSCGroup.com, studentassistplus.com, trans2pay.com

All of the above sites looked VERY fraudulent. I then looked up student loan scams and my experience matched 100% with a few examples that were mentioned on sites.

I called my student loan Nelnet company and told them that I was scammed. They stopped my forbearance request and are currently working with my account to bring it back to them.

I also called my bank and explained to them that the $599 payment was a fraud charge. They are currently investigating this transaction.

I have tried to email them to cancel their services with my student loans and they haven’t responded. 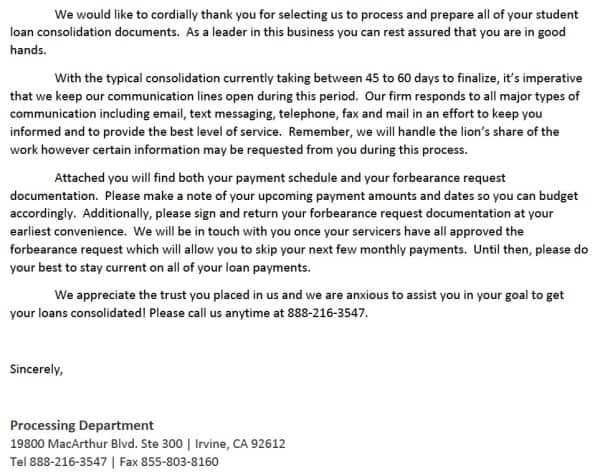 Another correspondence mentioned the “Department of Student Loan Center.”