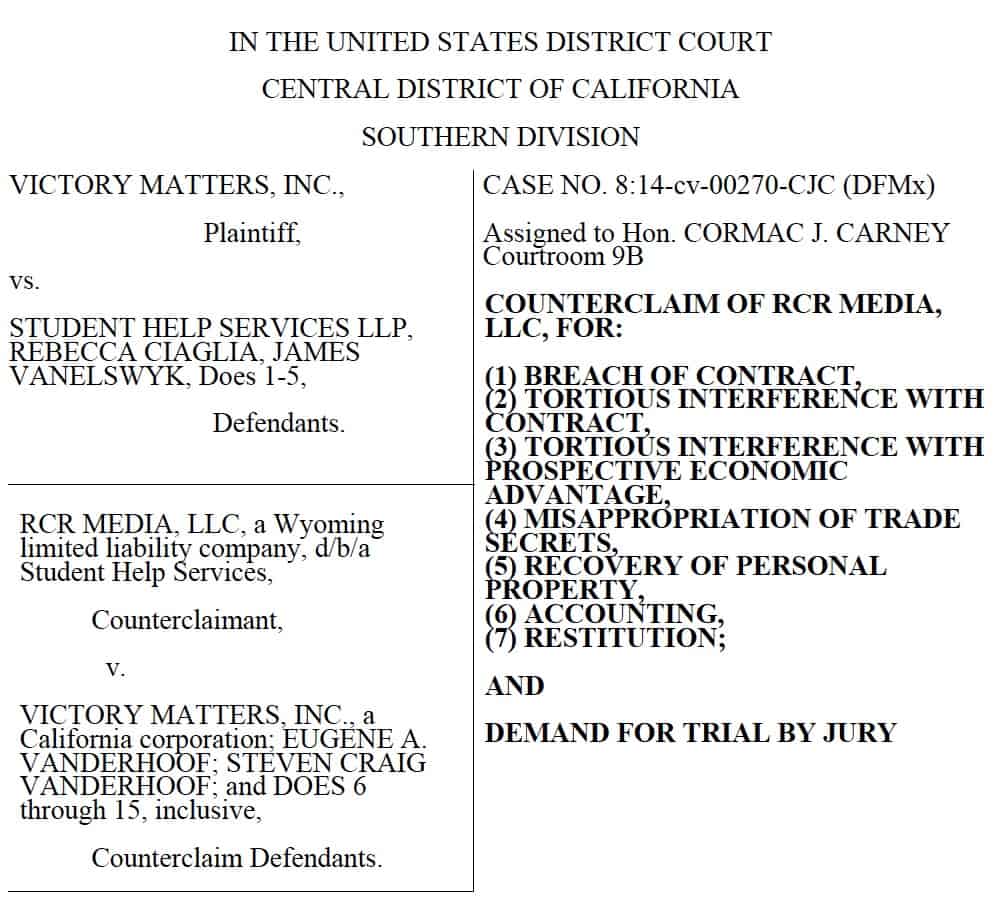 Last week I received a tip from a reader who alleged the infamous Steven Craig Vanderhoof from the old Credit Exchange was now involved in selling student loan debt relief. You can see that article here.

Well thanks to a wonderful reader and tipster (send in your tips here) I think the allegation has some involvement in GetStudentDebtRelief.com and the website, Student Services, and a relationship with Victory Matters, Inc.

According to public records forwarded to me, on February 25, 2014 Victory Matters, Inc. filed suit against Student Help Services, LLP, Rebecca Ciaglia, and James Van Elswyk. Just for reference, Van Elswyk has also been associated with a number of debt relief companies.

The complaint filed by Victory Matters alleges they were screwed out of commissions from selling student loan debt relief services.

After meeting with Student Help Van Elswyck and Ciaglia in 2013, the complaint says Victory Matters invested $328,000 in “infrastructure, advertising materials, promotional campaigns, and other necessary tangible and intangible products and services in order to perform its obligations and duties under the Contract.”

By the time the lawsuit was filed by Victory Matters in 2014, the allegation is they were owed nearly a million dollars in unpaid commissions. You can read the complaint, here.

So none of that mentioned Vanderhoof, yet. Wait for it.

In a counterclaim filed by RCR Media, LLC in response to the original lawsuit, it names as plaintiffs, Victory Matters, Inc, Eugene A. Vanderhoof, and Steven Craig Vanderhoof. 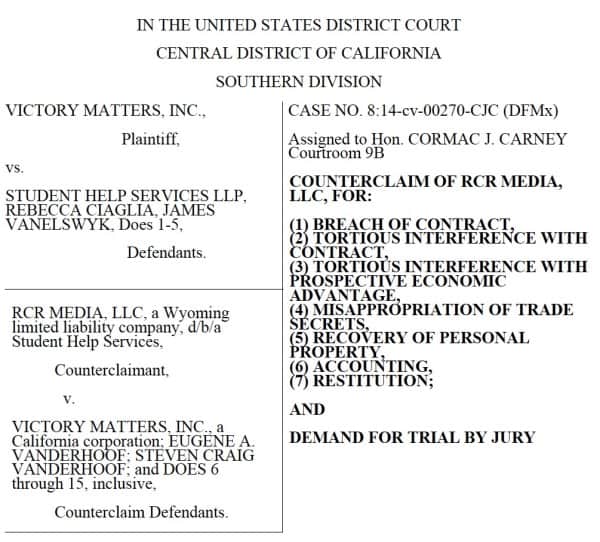 The counterclaim makes the connection that RCR Media is really Student Help Services.

This suit names parties by saying:

“Counterclaimant RCR Media, LLC (“Student Help”), is a Wyoming limited liability company, doing business as Student Help Services, with its principal offices in Dallas, Texas and Delray Beach, Florida. None of the members of Student Help is a citizen of Delaware or California.

On information and belief, Counterclaim Defendant Victory Matters is a Delaware corporation with its principal office in Orange County, California.

On information and belief, Counterclaim Defendant Eugene A. Vanderhoof is a resident of Camden Wyoming, Delaware. He participates in some manner in the ownership and control of Victory Matters.

On information and belief, Counterclaim Defendant Steven Craig Vanderhoof is a resident of Orange County, California. He participates in some manner in the ownership and control of Victory Matters.”

The countersuit of course paints a different picture and claims Victory Matters did not deliver the signed client contracts to RCR Media.

Eugene A. Vanderhoof signed the agreement on behalf of Victory Matters. The effective date of the Independent Marketing Agent Agreement was June 16, 2013.

When the term of the Independent Marketing Agent Agreement expired on June 15, 2014, Victory Matters did not deliver the signed client contracts to Student Help. As provided in Section 23.1 of the Independent Marketing Agent Agreement, the agreement between Student Help and Victory Matters remained in force for one year after the effective date of June 16, 2013.

Victory Matters substantially contributed to the unacceptably high rates of NSF and declined payment transactions involving clients of Student Help. Victory Matters did this, by misleading clients into believing that they could not cancel their contracts with Student Help, and by failing to respond promptly to inquiries from clients who wanted to cancel.

Dissatisfied clients who believed that they could not cancel their contracts, or whose inquiries were not promptly answered, simply closed or drained their own banking or credit accounts, rather than continuing to pay for services that the clients no longer wanted to buy. That led to their payment transactions with Student Help being declined.

Beginning in December 2013, after Student Help had lost its merchant banking accounts and the ability to draw payments from clients by automated transactions, Victory Matters and Steven Craig Vanderhoof then solicited and induced clients of Student Help to enter new contracts – with another firm or firms – for providing document preparation services in seeking to consolidate their student loans. One such firm trades under the fictitious business name of “Student Loan Services.US.”

On information and belief, Victory Matters and Steven Craig Vanderhoof have derived and may continue to derive substantial revenues from inducing clients of Student Help to enter new contracts with other firms, such as Student Loan Service.US.” – Source

Eventually They Worked It Out

By October of 2014 the parties worked out a agreement to settle this matter, and this is where Steven Vanderhoof put his signature on the line. 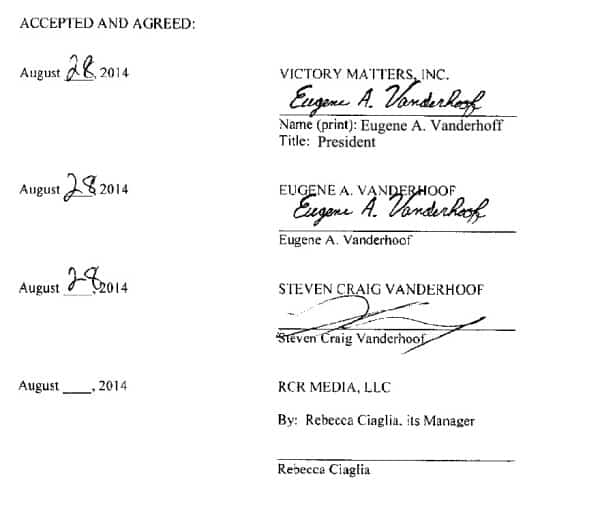 So all of that appears to confirm the claims of the tipster (send in your tips here) last week and tie Steven Vanderhoof to the student loan services sales.

About two weeks ago, it appears AEL Financial filed a Writ of Execution to ask the United States Marshall to make Contact with Steven Vanderhoof over an unpaid judgment against Vanderhoof and Credit Exchange. – Source