I was alerted to a lawsuit that was filed yesterday against Debt Relief Advocates, out of Plano, Texas.

The suit claims the consumer was approached with an offer to settle their debt and wants to turn this action into a class action lawsuit against Debt Relief Advocates. But what makes this suit interesting and newsworthy is the allegation made by the Plaintiff. The claim is the consumer did not owe the debts the marketing material or company claimed they owed. As the complaint says, “DRA violated R.C. §1345.02 and committed an unfair or deceptive act or practice in connection with a consumer transaction because DRA offered debt mediation services when DRA knew that Plaintiff did not owe an debt obligation and Plaintiff had an inability to receive a substantial benefit from DRA’s services.”

According to the complaint filed the consumer was approached for debt relief services.

“DRA mailed letters inviting Ms. Payton to renegotiate non-existent debt and made multiple phone calls suggesting she do the same thing to the Plaintiff at her home. The letters were titled “Activation Notice” with the subject “Re: Your Renegotiated Credit Card Balance Activation”. The letters urged the addressee to call DRA’s Activation Department to immediately activate a debt mediation plan.” 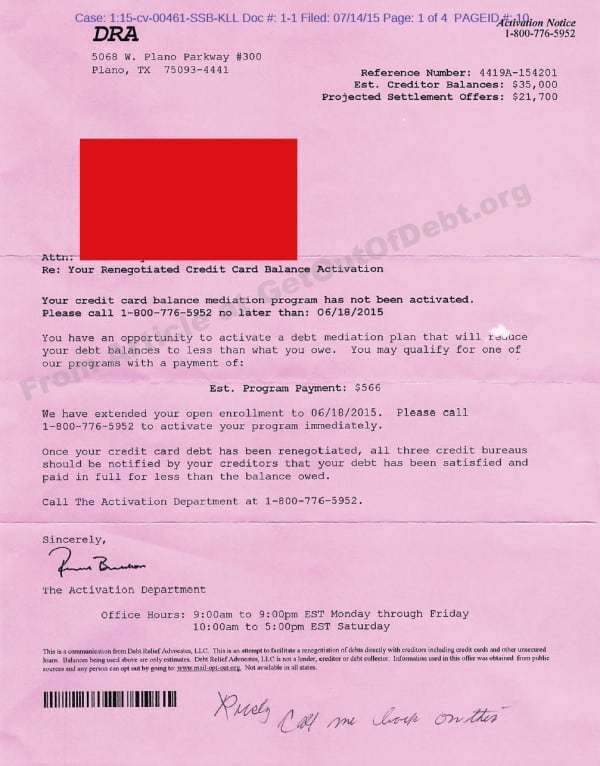 That letter looks similar to others I’ve written about over the years.

The letters fail to list a specific creditor and use generic terms such as “Creditor Balances,” “Credit Card Balance,” and “Debt Balances.”

The fine print of the letters states, “This is an attempt to facilitate a renegotiation of debts directly with creditors including credit cards and other unsecured loans.” The fine print also states that the information used in DRA’s offer was obtained from public sources.

DRA continued to send debt renegotiation letters and make phone calls to Plaintiff, despite Plaintiff expressing to DRA that DRA was attempting to renegotiate a debt obligation that did not exist.”

And apparently DRA (Debt Relief Advocates) had stirred up some complaints with other Ohio residents. The complaint filed says, “DRA engaged in similar practices and procedures to renegotiate alleged debt obligations, as documented the Ohio Attorney General (“OAG”) has received three complaints where DRA contacted consumers and attempted to renegotiate debt obligations that did not exist.”

The suit presents information from other sources about DRA. These items include some bad yelp reviews, a BBB listing, and other complaints from Ohio residents.

The complaints from other Ohio residents make the same allegations that they did not owe the debt Debt Relief Advocates claims they owed.

This case was filed by Marc Dann.