I left UAE in 2013 with credit card debts. Got work to pay the mortgage during the lean times and returned to take up another position back in UK. Could have paid them off but would have come back with nothing and needed support to take the new job so decided not to pay them. Being harassed by CWD and have sent a letter to them and received their standard letter by return.

Has anyone had any success with dealing with CWD and how should they be played? 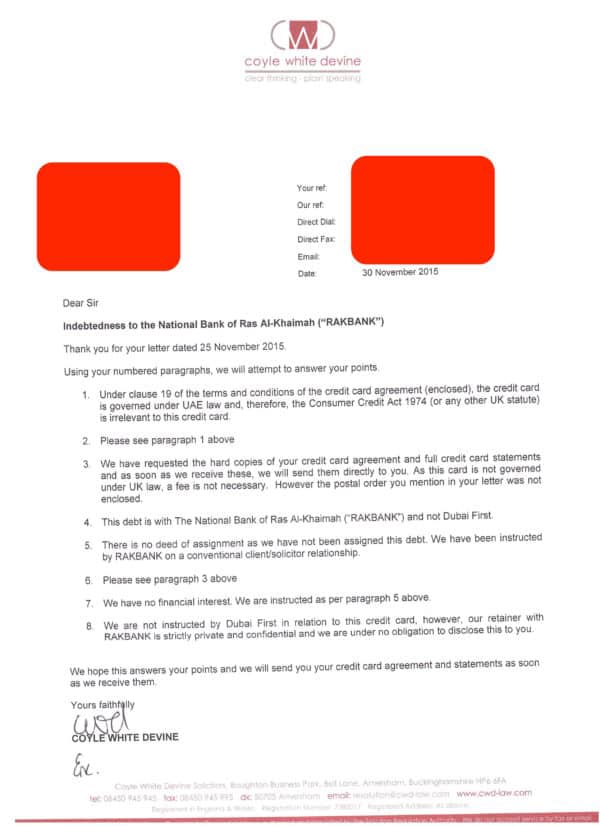 Thank you for attaching the letter you received.

I hope there are others who can share their experiences and we can try to get a definitive answer here.

My current answer to people on this has been to seek legal advice.

There are a lot of questions to be answered here.

If CWD does not own the debt, how can they legally collect it here in the UK?

Has anyone been actually taken to court and had a CCJ or other UK legal action taken against them in these situations?

And if so, then they are afforded the same debt options as any UK debts, such as a token payment arrangement, debt management plan, IVA or insolvency options such as bankruptcy or a Debt Relief Order.

Unless someone in the UK with UAE debts has assets such as property here to protect, CWD is not going to collect much. People will use the means here in the UK to pay what they can afford, or discharge the accounts in a form of insolvency.

I am not a legal professional, but I cannot see the UK courts issuing CCJ’s or any other action against a debt outside of the UK and EU. However again, I am not a solicitor.

If the UK courts issued CCJ’s or other actions against UK citizens owing debts in the UAE, it opens a precedent for any debt in any country to be collected here in the UK. Highly unlikely.

See also  How is My Lender in Dubai Calculating My Interest I Owe? - Maria

Please let us know anything else you find out. I have researched this ad nauseam and have not found anything to point to where CWD has anything to do except bully and scare people.

I invite CWD to contact me and we can discuss this. Maybe they can enlighten me.

If you have a question you’d like to ask about how to get out of UK debt, just use the online form.
Latest posts by Jon Emge (see all)