In the annals of the debt relief industry there have been some incredible events between companies. I think this one still takes the top spot.

But a rising issue may soon be challenging that spot.

About a month ago I was contacted about concern over a company called Core Advisory Group. So I reached out to the company through someone identified as David Clarke. As of the time of publication I’ve never received a response back.

My email to Clarke asked about a few questions raised. Here is my email.

I’m working on an inquiry about Core Advisory Group and need to confirm some details prior to publication. The story should appear on this coming Monday morning.

So if you could provide me with a response I can quote, and clarify if you are selling a loan modification or mortgage restructuring service, I want to make sure your voice is heard in the article. If you are not, then let me know you are not.

I could not help but notice a similarity between your client agreement and that of Colleagues in Law. Does the Core Advisory Group or any of the officers, managers, contractors or employees have any relationship with that company? It seems like an odd coincidence. Very strange. Especially since I think I remember a Denny Lake who found himself in trouble with the FTC was associated with the same Colleagues in Law.

And I’ve also been told that David Clarke is the owner or manager of the LLC. Can you confirm that for me please. I want to make sure I’ve got the facts right. If David is not, can you please let me know who the owner is.

And Here is Where It Gets Odd

Out of curiosity today I dropped by the Core Advisory Group website to see what was new. I could not even get past the home page. They’ve added a big new warning message to site visitors. – Source

WHOA! What in the world is going on? To make matters even more confusing is this recent complaint posted online. In the complaint someone made some connection with Colleges in Law.

The alleged couple filing the complaint had a number of issues they wanted to make public. But that’s not even the interesting part. The response is where it gets interesting.

The rebuttal filed on the complaint says, “My name is Mike Luong former co-owner of CORE Advisory Group, as mentioned boldly on this report. I want to express my sincere apologies to Mr. & Mrs. Pompeo as you have noticed, had entrusted in our company, to help save their home but failed to do so. At the time working together with Devin Benter, my role was very limited and till this day I do regret the poor judgement for agreeing to have partnered up with Devin Benter, which at the time, he was running & operating Colleagues in Law before CORE and Colleagues agreed to combine as one entity under CORE Advisory Group, LLC. It is unfair, unethic, and very unprofessional for any of us to take advantage of this forum to dispute personal vendattas amongst decaying business relationships, when the focus should be addressing the issue at hands and that is to return the money that was taken from Mr. & Mrs. Pompeo and lets hold ourselves accountable for the mistakes made and not divert into childs play on their expense, by resorting to slanderism, libel and character assignation.

I have provided Mr. & Mrs. Pompeo all the supporting documents to show that indeed Devin Benter knew of this situation and made the final decision as to the outcome of the disputes back when Mr. & Mrs. Pompeo sent back the reconciliation package to only give an insulting proposal of 10% refund out of the $3800 paid to CORE Advisory Group. If you would to see any documents to support my statements, do not hesitate to call me directly at 949-229-7110 or email me [email protected]

On the final note, Devin lets try not to co-mingle our issues with our clients issues and be more professional about this and I do commend you for wanting to refund these poor folks back their money so once that happens, we will be more than glad to come back and update this forum on the exciting news.”

And has the following email attached to it. But then Core Advisory Group responds and points the finger back at a Brett Matsuura and Mike Luong. Matsuura, the response alleges, is the former manager of Core Advisory Group. It appears he is the individual the warning message on the homepage is directed towards since they say, “He may have reached out to these clients to encourage them to file complaints (based on lies and innuendo) against our company as well as attempting to direct them to his own company stopforeclosurehub.com.”

When these situation devolve into finger pointing between past partners and companies falling apart, it’s the consumer in the middle who get the most tossed about. Who do they believe? And it’s hard for me to provide specific advice when the company never responded to my request. I tried.

The illegal mortgage modification service claims faced by Colleagues in Law seems relevant in this case. Colleagues in Law was named in an Federal Trade Commission complaint against a Denny Lake. You can see the FTC case history, here.

In a Colleagues in Law podcast, Lake identifies himself as the “Program Director” and asserts that “if we can’t win [against your lender], no one can.” – Source

So here is how it all gets twisted together. The Orange County, California register shows Devin Benter has been associated as “business owner” with a number of companies.

At lease one person alleged that David Clarke is an identity that Deven Benter has used.

So the best I can advise at this point is if you are using the services of the company and have any concerns, contact the company and give them a chance to provide you with satisfactory answers. If you feel like you want to do some checking on this or any company, you can always use my free commonsense guides below.

Consumers should not get stranded in the middle of whatever mess this is going on between ex-business partners. Clients just want the services they signed up for and speaking of signing up, people need to be aware that there should not have been any advance fees charged if the service being provided was to modify or alter the mortgage. The FTC publishes information to help consumers understand what they can and cannot be charged for. See this post on the FTC website.

Most importantly the FTC says, “The most significant consumer protection under the FTC’s new rule is the advance fee ban. Under this provision, mortgage relief companies may not collect any fees until they have provided consumers with a written offer from their lender or servicer that the consumer decides is acceptable, and a written document from the lender or servicer describing the key changes to the mortgage that would result if the consumer accepts the offer. The companies also must remind consumers of their right to reject the offer without any charge.”

If you’d like to read the FTC press release about the Denny Lake situation you can then make a more informed decision if any of the current services being pitched to consumers sound similar.

It appears a direct connection was made between Devein Benter and David Clarke in this blog warning consumers about Core Advisory Group I just discovered.

That blog has the following image on it. 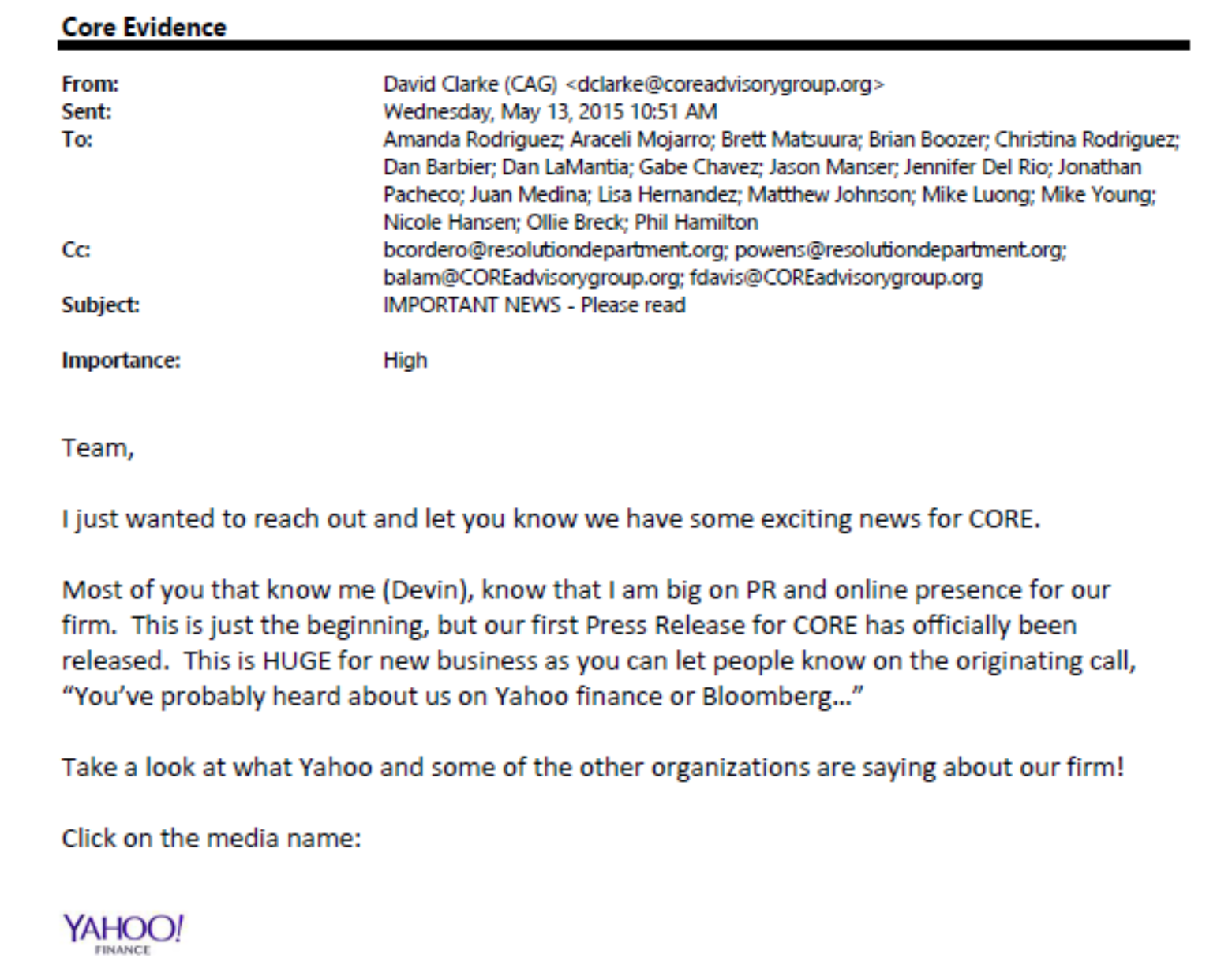 Although the message is sent from the email of David Clarke it says, “you know me (Devin).”

The site at coreadvisory.blogspot.com contains a tremendous amount of information that I did not publish. If the Core Advisory Group situation is something you are interested in then that site might be worth a look.

Apparently that site received a Cease & Desist letter from attorney Timothy L. O’Reilly stating he represents Devin Benter and some entity DEEVO, LLC. But the site published the letter and offered a response to it. You can see that response here.

The blog author is identified as Mike Luong, who was mentioned previously in the article.