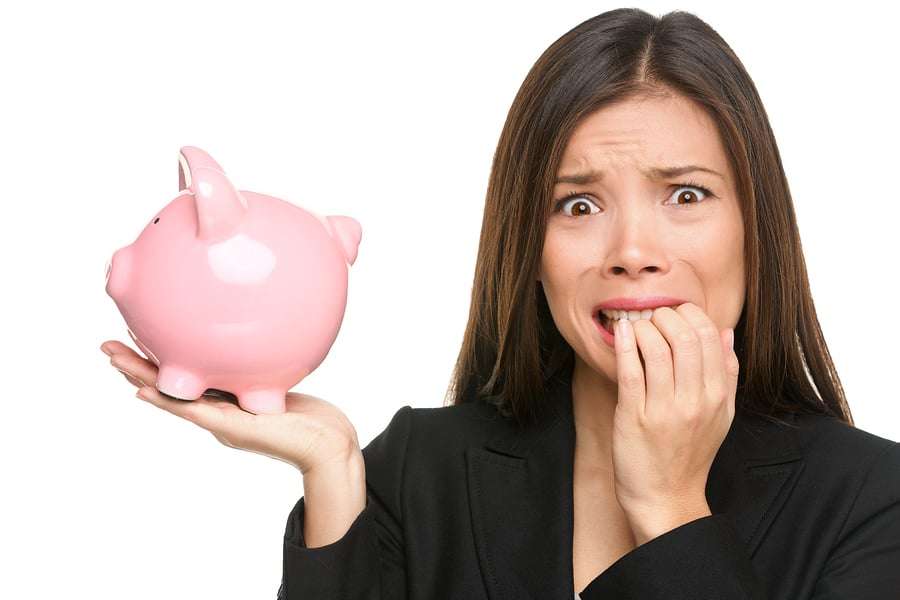 My wife and I are in a tough situation… we live in a rural area and nobody (CPAs, H&R Block, and even a Tax Lawyer out of the area) can give us answers as how to proceed. I will only summarize to save us time and can respond with more info. I would GREATLY appreciate any insight.

My wife and her ex-husband had a short sale in 9/2008. They divorced in 12/2008 — which was primarily due to her exH lying and racking up $84k in a HELOC. He used a majority of this money to start two businesses that failed. During the divorce, which began a couple months prior to the short sale, an initial judgement showed her exH was required to pay the 2nd mortgage (HELOC) since it was primarily used for his businesses. When the divorce was finalized in 12/2008 — the final judgement did not list her exH as needing to pay the mortgage due to the short sale and release of debt. After the short sale, the primary was paid along with an additional 17k towards the 2nd — leaving $66k. The 2nd was through WAMU, which went into bankruptcy in 10/2008, and Chase inherited the debt. My wife’s credit report shows the 2nd was written off and closed in 10/2008. My wife continued to have collections come after her for the 66k for 7 years until 2015 when it was removed from her credit report.

Fast forward to February 2017. She received a 1099-C from Chase for the 66k with a “identifiable event” date of 8/22/2016. The event code is F (Cancellation of debt by Agreement; i.e short sale). Her exH should’ve received a 1099-C as well — both probably showing the “full amount” of $66k. If my wife is responsible to pay taxes on this debt — she would be responsible for half the amount ($33k) due to living in California (community state).

My wife does not qualify for any of the exceptions because the $$ from the 2nd was not used to improve the primary residence and she was not insolvent at the time of the identifiable event listed on the 1099-C — which I believe is incorrect. 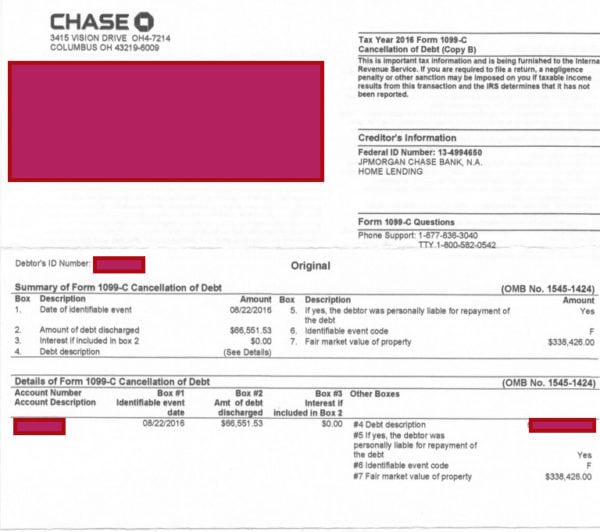 1) Is she responsible to pay taxes on any of the debt since during the divorce it was agreed that her exH would be responsible for paying the 2nd? However, as stated above, after the short sale, this requirement was removed from the final judgement because the loan no longer existed.

3) Should we contact Chase and demand a amended 1099-C showing her exH responsible for the full amount? (Chase will be unlikely to do this).

We were supposed to get $4k back this year in taxes. Should we send in our taxes with documentation stating that my wife is not responsible for paying taxes on the debt and it is the sole responsibility of her exH via divorce? We can attached the first judgement prior to the short sale stating this fact.

Should we file separately with her accepting the $33k as taxable income? (We would only do this if all evidence pointed that whether or not her exH used the 2nd for business, my wife is still on the loan so she is responsible for half the amount).

Finally, my wife and I are meeting with her divorce attorney in a couple weeks to discuss the situation in regards to providing proof that her exH was responsible for the 2nd mortgage in the courts eyes prior to the short sale and thus he should be responsible for paying the taxes on the amount of debt (charged off).

Thank you for any suggestions, guidance or comments,

Your situation is above my pay grade so I went and asked Jim Buttonow, Director – TRS: Tax Practice and Procedure at H&R Block.

Here is what Jim had to say:

“Wow- there is a lot to unpack here- more questions than answers…..

First- Chase has set the “identifiable event” that caused the 1099-C to be a “short sale” (“F” indicated on the 1099-C) in 2016. This appears to conflict with Drew’s record (he said the short sale was in 2008. This is an eight year discrepancy that needs to be explained by Chase (I would contact Chase and get the reasoning/correction).

Second – multiple debtors who are liable for the debt each receive Form 1099-C – there appears to be no exclusion in place at the time the debt was forgiven. If this is a correction of Form 1099-C to the earlier date, is there an exclusion available in 2008???

See also  I've Been Hounded by Dell Computer for Eight Years for a Debt I Do Not Owe. - Thomas

Third- if the taxpayer’s ex-husband is liable via divorce decree but has not been relieved from the liability from Chase- the taxpayer may be in a precarious situation. If they are still held to be jointly and severally liable for the debt by Chase, they are subject to the debt forgiveness. This is a legal question of who is ultimately liable from the divorce decree. However, the “who ultimately pays the restitution on the tax on debt forgiveness” does not appear to matter for the issuance of Form 1099-C.

Fourth- The taxpayer, based on several factors, will need to look at how much they need to report of the total cancellation of debt income. The community property state complicates the separation of the 1099-C income. I point to my post on 3/17/2013 which discusses “splitting” of the 1099-C among divorced spouses. More information is needed on how to apply the community property state rules – you can find some help from the IRS here.

There are more legal questions than tax questions in your scenario. Consulting a local tax attorney in your area who has experience in divorce situations would be the place to start. I am not sure whether the tax attorney that you consulted had this experience”

Jim is my go to guy for complicated tax questions and it sure sounds as if he provided enough context to get you headed in the right direction.

If this 1099-C was issued in error or is just flat out wrong, there is a process to correct it. See this post on how to report the error.