California Attorney General Xavier Becerra yesterday announced that he is suing Ashford University, an online for-profit school based in San Diego, and its parent company Bridgepoint Education for engaging in unlawful business practices.

In the lawsuit, Attorney General Becerra alleges that Ashford made false promises and furnished faulty information to students to persuade them to enroll. It also used illegal debt collection practices when students struggled to pay their bills. Attorney General Becerra seeks restitution for students, a permanent injunction prohibiting similar activities in the future, and civil penalties from Ashford University.

“No school should ever steal the American Dream from its students, but that is exactly what Ashford University did,” said Attorney General Becerra. “Ashford University preyed on veterans and people of modest means. This for-profit college illegally misled students about their educational prospects and unfairly saddled them with debt. In today’s economy, college is too pivotal and precious to let a predatory for-profit company swindle our daughters and sons out of the higher education they’ll need to get ahead.”

In 2005, Bridgepoint Education bought a tiny non-profit Catholic university in Iowa named Franciscan University of the Prairies. Bridgepoint cut the school’s ties with the Catholic Church, rebranded it as Ashford University, and exploited the school’s access to federal education funds to build an online empire with over 80,000 students by 2012. Ashford University proceeded to close the original Franciscan University’s brick and mortar campus in Iowa in 2016.

Attorney General Becerra alleges that Ashford accomplished its massive growth with an army of “Admissions Counselors” who were really salespeople working in toxic boiler-room conditions. The complaint alleges that Ashford’s administration subjected these “Admissions Counselors” to extreme pressure to meet enrollment targets and that it verbally and psychologically abused them when they fell short.

The complaint further alleges that: 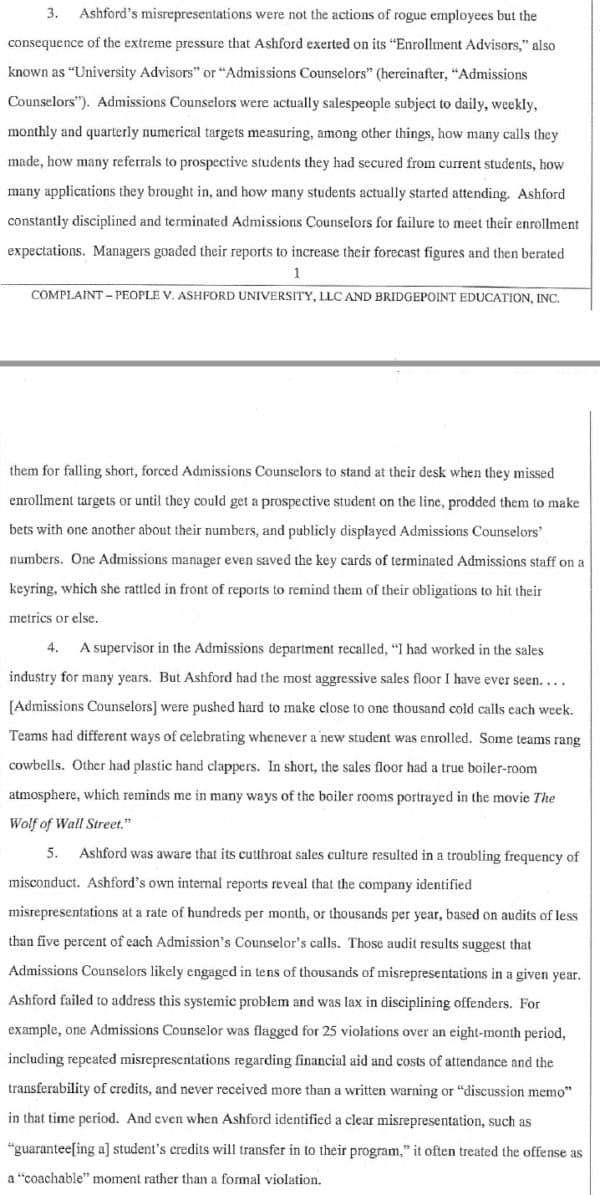 Bridgepoint Education responded to the suit by saying, “Bridgepoint’s institutions serve as a model for how online education can better the lives of people who did not, or who were unable to, pursue more traditional avenues to degrees. Thousands upon thousands of our current students and graduates can attest to the educational value provided by our undergraduate and graduate programs that have bettered their lives. We are extraordinarily proud of our well-deserved and hard-earned reputation for improving the lives of thousands of students by providing a high-quality education that serves communities and gives families the opportunity to succeed.” – Source