New news out about Florida based Elimidebt Management Systems seems to indicate the West Virginia Attorney General is none too happy with them or Thomas Roland, the guy behind DebtWave Credit Counseling and Coastal Credit Solutions.

After looking at the Elimidebt website it appears they are trying to steer people away from bankruptcy and into a debt management and potentially a debt settlement program. I did a little research and see they are involved with Americorp, the debt settlement servicing firm in New York that also served the accounts for Hess Kennedy in Florida and Allegro Law in Alabama, both of which have been shut down by their respective states.

From the Elimidebt Management Services Site

While poking around the site I came across the following statement and boy did it make me laugh. Why in the world would Elimidebt actually have a notice on their site that shows they don’t have a license number for the state of Maryland.

I was surprised to find their mailing address is the same as PMG Progressive Marketing Group. 1 Huntington Quadrangle, Suite 3S07, Melville, NY 11747. But Elimidebt is also listed as being located at 1800 Pembrook Drive, Suite 290, Orlando, FL 32810

Elimidebt Management Systems is owned by Thomas Roland and Issac Bobbe. And in an interesting twist, the company was founded with help from attorney Julian Spirer in Washington, DC who was heavily involved with Ameridebt and Andris Pukke at the same time. – Source 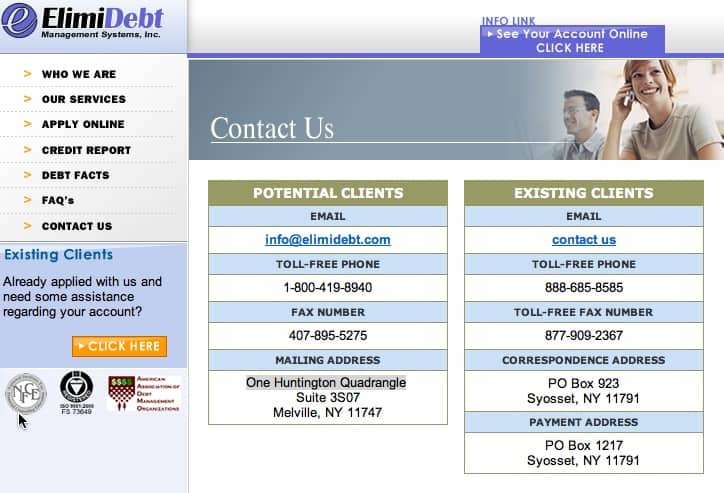 The payment and correspondence address that Elimidebt lists on their site, again, see the image above, is actually one associated with AmeriCorp in Syosset, NY. AmeriCorp has a horrible reputation for customer service, just read the comments from people on this post.

Anyway, the reason this whole article started was from something I spotted from an article in West Virginia.

On Tuesday, the attorney general’s office asked a Kanawha circuit judge to force Elimidebt Management Services and its president, Thomas Roland, to comply with an agreement to pay back money illegally collected from West Virginia consumers.

The Orlando, Fla.-based company entered into an “assurance of discontinuance” agreement on June 11, agreeing to pay back $6,661 of fees it wrongly charged its customers.

But the real amount was almost $80,000, and Elimidebt hasn’t even paid the original $6,600, according to Tuesday’s petition. Source

Another debt relief company, American Debt Counseling, caught up in the initial West Virginia roundup ended up making one of four payments to the Attorney General and then went bankrupt.

Well if the WV AG wants to get some of their money back, he better act fast. According to the last non-profit 990 tax return available that Elimidebt filed, the company lost $592,213.