This review is the result of a question from a reader about this company.

jhassgroup.com
Domain name is owned by Jason Hass (azlawyer@gmail.com) and was registered February 29, 2008.

Jason D. Hass is a lawyer in the State of Arizona and has been admitted to practice law in Arizona since November 4, 2004. As a lawyer he is associated with the J Hass Group.

Jason Hass, CEO
As counsel to another firm, Mr. Hass saw a more efficient and client friendly way to operate. His dream of doing it “better” was realized when he founded the J. Hass Group.

Michelle Lee, Head of Operations
Her years of military service and internship in the legal department of another debt settlement firm prepared her for her role as Operations officer, a position for which Ms. Lee is ideally suited.

Jeremy Hass, Head of Marketing
A graduate of the University of Arizona, Mr. Hass has been key to growing the firm from a handful of small offices to over 100 nationwide.

Jeff Hass, Customer Service, Coach and Mentor
Mr. Hass is the guiding force behind all J. Hass Group endeavors. A Renaissance man, Mr. Hass has over 40 years of business experience and has been a leader in his states politics.
Source

The Attorney General’s office has filed suit against five different debt-settlement companies in recent years, while its Economic Crimes division took action against multiple others. One firm they investigated was the Law Office of Jason D. Hass, an Arizona-based attorney who solicited clients in Florida for debt-settlement services.

“It was definitely a nightmare,” said a Tampa Bay woman, wishing to remain unidentified, speaking of her dealings with Hass.

She says after Hass agreed to work down her debt, she began paying him $330/mo. However, after six months, she says Hass hadn’t even contacted her creditors and was pocketing the money. Her late charges continued to pile up and her credit continued to drop.

“I paid them for six months,” said the victim, “before I realized I could have paid off three of my credit cards with the money I had sent them.”

She got her $1,500 back from the Attorney General while Hass was put on probation with the State Bar of Arizona for an unrelated ethics violation. – Source

Suit was filed claiming plaintiff paid J Hass Group $5445.96 but almost a year later J Hass Group had “not negotiated nor settled any obligations of the debtors.” – Source

Another suit was filed to recover funds paid to J Hass Group and Jason Hass as well.

On August 13, 2008, Kristina Lynn Buckner (the “Debtor”), filed a voluntary petition under Chapter 7 of the Bankruptcy Code.

Subsequently, Gene R. Kohut (the “Trustee”) was appointed the duly qualified and acting Trustee in the matter.

Upon information and belief, the Defendant is an Arizona attorney who provides debt settlement services via a company called the J.Hass Group.

The Trustee has investigated the Debtor’s pre-petition actions and financial condition, and has concluded that the Defendant received an avoidable fraudulent conveyance from the Debtor, and now brings this action to recover such conveyance. – Source

A default judgment was later won by the plaintiff against the J Hass Group for $4,500 in this case.

Barbara B lives on $761 a month in Supplemental Security Income disability benefits. Facing $30,000 in credit card debt, she called the Freedom Debt Network (located in New York) which works with the law firm of Jason D. Hass located in Arizona. Over eight months, she borrowed money from her 19 year old son (who works as a stocker at a large retailer) and paid $3,930 to settle the accounts. One account was settled for 90% of what was owed when she entered the program, while another settled for 30% of what she owed. Taking into account the savings on the settled account ($1,125), the end result was Barbara B had lost $3,206 while increasing her debt. Despite complaints to the Arizona Bar, only $185 was returned.

On paper, the worksheet plan seems reasonable, especially when one takes into account that the target settlement rate of 40% is based on “industry standards.”15 The problem is that set­ up fees are taken immediately and creditors never wait 36 months before pursuing debt collection.

Such was the case of Barbara B. She learned about her set-up fee provision (15% of her $30,000 debt or $4,500 collected over 10 months) after being sued four months into the program by HSBC. Despite having “personal and long standing relationships with individual creditors and collection agencies,” Hass got rid of the suit by settling with HSBC for 90% of what was owed ($2,400.) The settlement then fell apart because Barbara had no cash on hand to pay HSBC, all but $100 of her payments to Hass over four months ($1,965) had been taken as set-up fees. – Source

A look at their web site found that there was a lot of important information missing to help consumers make an informed decision about using their services. There was no FAQ page and only one page about the debt settlement program. – Source

They do talk about their fees and the fact all of the first three months of fees go to pay them, not your creditors. After that fees will continue to be withdrawn through the first half of your program.

Our fees are a percentage of the total debt that you enroll in our program. We amortize the fees over half the length of the program (in other words, we are in this with you for the long haul) only the first three months go totally to fees in order to cover the hard costs of establishing your account.

These fixed costs include the time, resources and manpower needed to set up your account, create your file, establish your trust account, create and forward the Power of Attorney to your creditors and to begin the negotiation process.

Fees are withdrawn over one half the length of your program. – Source

As of the date of this review, the BBB complaint history with J Hass Group is below. 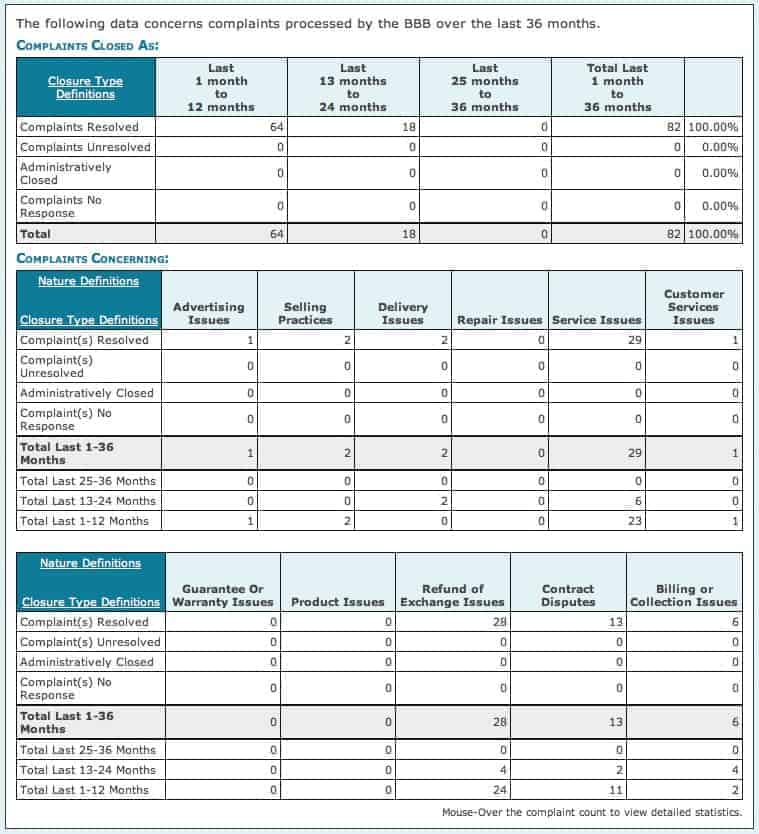 The BBB review as of the date I wrote this review. 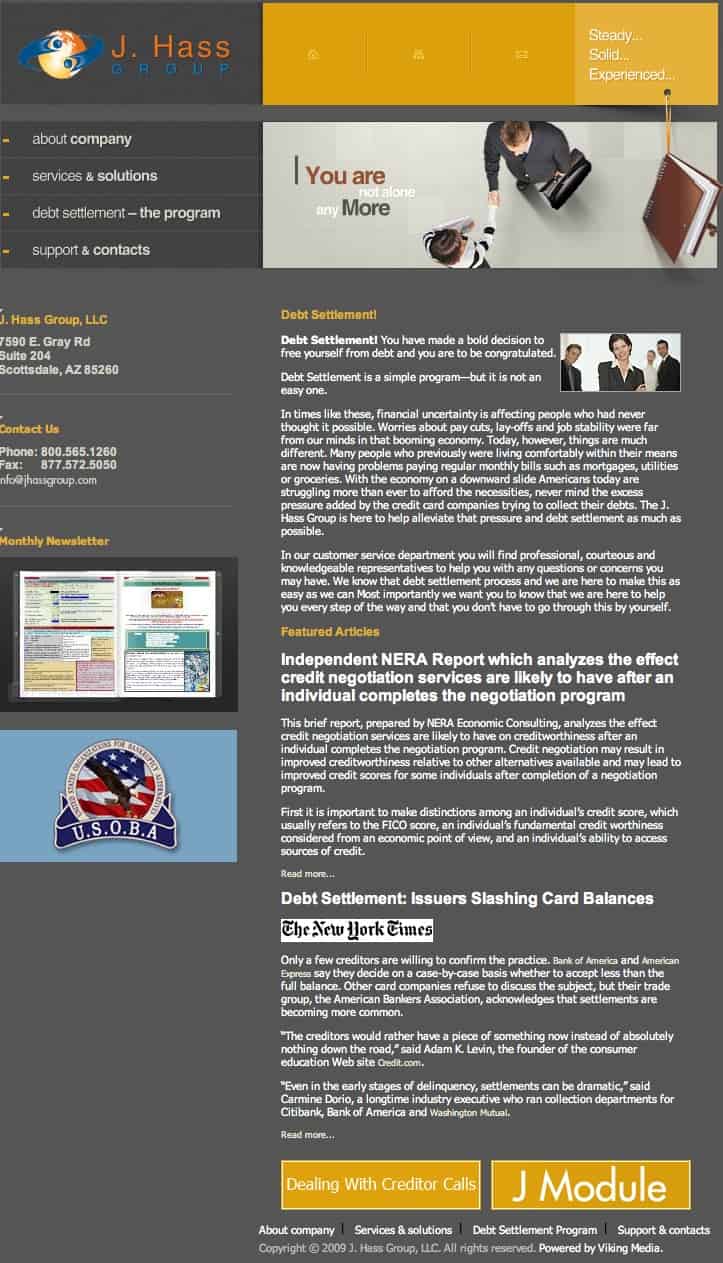