A survey by Bankrate.com that was conducted at the beginning of February, 2012, which found people are feeling more confident about their financial standing. That’s good news for a rebounding economy. Bad news for debt advice providers.

The most shocking figure for me, in a positive way, was that more than 70 percent report having more in savings than credit card debt. That’s a reflection of increased savings and carrying less credit card debt.

One in four said their credit card debt was larger than their savings account or emergency fund. Having no savings was reported by 16 percent. 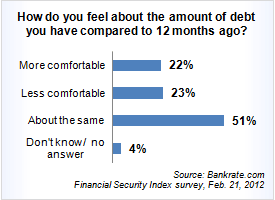 Only 22 percent of respondents said their net worth was lower today than it was a year ago. Based on the economic gloom we’ve been living with I would have expected that number to be higher.