I’ve got to admit when I read the news of Everest Debt Solutions settling with the FTC over false and deceptive advertising claims I did say out loud, “I Told You So!”

You see back in September of 2009 I answered a reader question “What Do You Think of Everest Debt Solutions? – Margo” and expressed my concerns over their claims. The response in the comments from Tim Daniels and anonymous Everest Debt Solutions representative was to threaten and attack me and even publish my home address online.

And then after the flurry of attacks I wrote “Everest Debt Solutions and FDN Solutions. These Debt Settlement Companies Are Really Starting to Piss Me Off Now” and the attacks continued.

As I said in that article:

What I am left wondering is how many people can actually work at the UPS store mailbox center or in that small house listed as an additional business address. Either we are not getting the entire story about these companies or the statements being made on their site are not earnest. On face value it goes way beyond general advertising hyperbole to make such bold statements about size and experience but can’t seem to produce anything to back those statements up.

The complaint filed by the FTC alleges:

Since at least 2007, Defendants have offered debt relief services to consumers having difficulty with their personal finances. Defendants’ services include a commercial debt settlement program whereby they offer, for a fee, to resolve consumers’ unsecured debts by negotiating settlements of their balances for less than the consumer owes. Defendants have induced consumers to join their debt relief program by claiming that they will substantially reduce consumers’ debts.

Defendants have advertised on the Internet through paid search results on Google’s search engine and Google ads on third party websites. Defendants’ advertisements have included the following representations:

Defendants have made various statements on their websites regarding the savings consumers would obtain by emolling in Defendants’ program. On everestdebtsolutions.com, the following bar chart has appeared prominently: 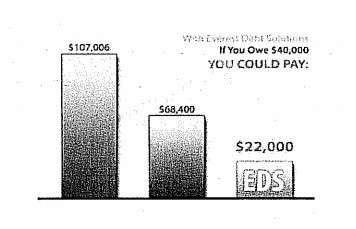 Next to the chart on the homepage, the website has included a section for “News & Updates Regarding Everest Debt Solutions.” This section has listed a “34% Settlement With HSBC” on October 28, 2010 as a recent update, indicating that a recent customer paid 34% of the debt owed.

Under the link “Proven Results” on the homepage, Everestdebtsolutions.com has included the following examples of “Recent Settlements”:

Everestdebtsolutions.com also has included the following statements throughout its website:

A footnote appended to the last statement has stated that the estimate was “based on yearly averages of settlements done for our clients nationwide.”

Alicia S., however, is not in fact a customer of Everestdebtsolutions.com, and the testimonial is not actual and genuine.

Defendants’ websites have provided consumers with a toll-free telephone number they can use to contact Defendants. Everestdebtsolutions.com also has displayed an online contact form where consumers could enter their name, email, telephone number, state, and amount of debt to “apply online” and receive a “free quote.” Defendants have used the infonnation provided to contact consumers directly.

Defendants’ representatives reinforce the claims of substantial reductions in debt via telephone. For example, one representative has. stated: “We…actually negotiate the balances of your debt down 40 to 60 percent of what you currently owe.”

After FDN receives a consumer’s application materials, which include, among other things, a fine print contract entitled “Debt Settlement Agreement,” that application is transferred to a back-end servicer for negotiation of the consumer’s debts.

Consumers emolled in Defendants’ debt relief program make monthly payments to a third party for two to three years in order to save up funds for the settlement of their debts and Defendants’ fees. Since October 27,2010, Defendants charged a fee equal to 30 percent of the savings achieved for each settlement.

In many instances, consumers who enroll in debt settlement programs experience a number of negative consequences that are common to the debt settlement industry. When consumers make monthly payments into their third party savings accounts rather than paying their creditors, their balances increase and creditors might engage in collections efforts or initiate legal actions against consumers to recover outstanding debts. Indeed, at least one version of Defendants’ Debt Settlement Agreement states, in small, buried language:

“If Client does not make required minimum payments to Client’s creditors…Client’s actions will probably be reported to consumer reporting agencies as late, delinquent, charged-off or past due balances. Client’s creditor may also raise the interest rate on Client’s account and impose other penalties (late charges). Client’s account balance may continue to grow as the creditor adds accrued interest, late fees, over-limit fees and penalties…Client’s balance may increase during the term of this Agreement.

Consumers who enroll in Defendants’ program are part of a financially vulnerable population and most are in no position to endure the increased financial hardship that results from failing to pay creditors for months or years. In fact, many consumers drop out of Defendants’ program before obtaining any settlements of their accounts or obtaining the promised reduction in debt.

Defendants’ above representations were unsubstantiated and have misrepresented a material aspect of a debt relief service. Among other things, Defendants have not factored in their fees when they have calculated the amount by which a consumer’s debt would be reduced. Nor have they factored in customers who do not complete the program. – Source

As a result of this suit the FTC reached a settlement agreement. The FTC announcement is below.

The Federal Trade Commission put a stop to the allegedly deceptive practices of a debt settlement operation that lured consumers with exaggerated claims about how it could help reduce their debts. The defendants behind the operation have agreed to a settlement that prohibits them from making any further misleading claims.

The FTC case against FDN Solutions, LLC and Timothy Daniels is part of the agency’s continuing crackdown on scams that target consumers in financial distress. The defendants claimed, mostly through Google ads and websites they used, such as everestdebtsolutions.com, 1800debtsettlement.com, and everestdebtrelief.com, that they could reduce consumers’ debts, typically by 40 percent to 60 percent, according to the FTC complaint. However, the FTC charged that these savings claims were misleading, because they did not take into account the consumers who dropped out of the program, or the fact that the fees each client paid totaled 30 percent of the savings achieved.

Operating from offices in Tustin, California and Tampa, Florida, Daniels and FDN Solutions used paid search results on Google’s search engine and Google ads on third-party websites to advertise their services, telling consumers, “Reduce Debt 70% Want Proof?” and “Save up to 70% On Credit Card Debt,” according to the complaint. A bar chart on one of the defendants’ websites showed that a consumer with a $40,000 debt would pay only $22,000 by using the defendants’ services.

The FTC alleged that Daniels and his company, also doing business as Everest Debt Solutions, 1800debtsettlement.com, and everestdebtrelief.com, violated the Federal Trade Commission Act by making unsupported savings claims and by using a fake consumer testimonial. One supposed testimonial attributed to “Alicia S., Lake Charles, LA” said, “Everest Debt Solutions was able to drop my credit card debt down 62%! They are truly a Godsend! God Bless.”

The defendants’ websites provided consumers with toll-free numbers they could call for more information. When they called, the defendants violated the Telemarketing Sales Rule by misrepresenting the amount of money or the percentage of the debt amount that a consumer could save by using their services, according to the complaint.

Who is Laughing Now?

The irony here is that if Everest Debt Solutions had just addressed my published concerns back in 2009 this would probably have never resulted in the FTC complaint and settlement. You’ve got to wonder why some companies fight so hard to make easy changes to bring their messages and statements into compliance and instead knowingly continue down a path which leads to no good end.

Under the terms of the FTC settlement the entities and individuals named must now provide the following if they wish to remain in the debt relief business.

IT IS FURTHER ORDERED that Defendants and their officers, agents, servants, employees, and attorneys, and those persons or entities in active concert or participation with any of them who receive actual notice of this Order by personal service, facsimile transmission, email, or otherwise, whether acting directly or through any corporation, subsidiary, division, or other device, in connection with the advertising, marketing, promotion, offering for sale, or sale of any financial related product or service or tax relief product or service, are hereby permanently restrained and enjoined from misrepresenting or assisting others in misrepresenting, expressly or by implication, any material fact, including but not limited to:

Defendants will be required to provide the FTC with the following information for the next ten years.

Latest posts by Steve Rhode (see all)
See also  Why is Everest Debt Solutions Claiming to be a BBB Member on Their Site and in Ads?