When people come to the realization they want to get out of debt fast or quickly they traditionally run into an emotional slap in the face and then want the pain of the debt to vanish – pronto! This leads them to fall for just about any old get out of debt scam or blindly believe the claims made by many debt relief companies without question.

Over the years I’ve come to learn many lessons after helping thousands and thousands of people deal with debt. The most important of those observations is that people in debt have the wrong mindset to best deal with their situation.

When you are in the middle of panic, depression, hopelessness, guilt, shame, and a host of other negative emotions you just don’t think straight and clearly. You certainly don’t think logically, rationally or reasonably.

People are Corporations Too

While Mitt Romney was running for president he was making a speech and uttered that infamous line that he then went on to be heckled for. “Corporations are people,” said Romney.

And I understand his point that as far as the law is concerned, corporations do have some of the same rights and responsibilities as natural people do.

But the reciprocal is true of his statement as well. People or families can be thought of as their own little corporations. They are their own little business units that have income, expenses, and hope to operate at a profit.

In the middle of an emotional storm we forget to operate like that and our objective evaluation of our own situation just flies out the window. 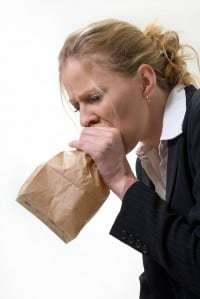 Imagine if corporations operated the way people do when they get into debt.

Some just don’t know what to do and are sending people over to Delta to check bags in others are paralyzed with fear, depressed and confused because the earnings report is down.

See also  Should I Try to Negotiate My Debt With My Own Creditor?

You finally make it to the gate. The gate staff is so distracted they have no plan on how to board people, it’s a free-for-all, the flight attendants are not sure if they are going to fly and the pilots are on the phone with some airline relief company looking for an instant magic solution.

Nobody is going anywhere. Not the airline, not the staff, and certainly not you.

It’s chaos and everyone gets hurt in one way or another. The airline loses customers, you can’t get where you are going, and the financial losses stack up. It’s not a good way to deal with the situation.

Clearly that’s a ridiculous example and you would never expect to see that situation in reality.

And you want to know why you would not see that happen? It’s because the people at headquarters are carefully evaluating their options and making decisions about how to deal with the situation that are best for the airline. They will take action to prevent a situation like that and they will take action that will allow the airline to move forward instead of stranding all the future passengers.

On November 29, 2011 American Airlines filed for bankruptcy protection to reorganize their debt so they could continue to operate and plan for a better future.

Many entities have to make financial compromises as part of the bankruptcy but investors and Wall Street applaud the decision as responsible.

People make the worst decisions when facing problem debt. I’ve covered that. And those emotional or brain chemistry reasons cause people to make just bad decisions.

Ideally, when people run into trouble they would carefully and cautiously evaluate all of their options to dealing with their debt. Then they would identify their goals they want to achieve and weigh the pros and cons of each option to meet their goals.

American Airlines wanted to survive to continue operating as an airline and came to the decision they could do that utilizing the legal rights afforded to them under law to reorganize their debt.

What if you looked at your situation and identified your goals were to get back to saving for retirement, building an emergency fund, and living within your means. Would it not then make rational and logical sense to pick the right solution to achieve those goals rather than emotionally reacting to some lesser priority goal, like not hurting your credit report, or avoiding bankruptcy.

See also  What is the Best Debt Counseling Company to Use?

When it comes to attacking your financial fire you need to look at your income, expenses, obligations, and goals and make clear and levelheaded decisions about what is the best plan for you that is not based on emotional decisions.

Just like in the American Airlines case, the company weighed their options and decided to reorganize their debts to fit within their income, without sacrificing passenger safety, and did it in a way they would be able to be productive and operate moving forward.

If you really want to get out of debt quickly, that’s the way you need to think.

To get out of debt you must change your mindset and stop thinking like an emotional hot mess and start holding your own boardroom meeting around your kitchen table.

The GetOutOfDebt.org site is full of so much information that is free for you to read and study to educate yourself about how to get out of debt in a way that is best for you. Please, take the time to review the information, educate yourself, and then make a decision that best meets your family corporation needs and goals moving forward. You can use the free How to Get Out of Debt Calculator to review your options.

Once you’ve done that and if you still have questions, just ask me for help. I’ll gladly help you talk it through to see if your plan makes sense.

2 thoughts on “How Do I Get Out of Debt Quickly? Change Your Mindset.”