This report is republished from the Federal Reserve Bank of New York and contains the authors analysis and finding about bankruptcy following the 2005 reform.

Personal bankruptcy was introduced in the United States through the Bankruptcy Act of 1978. After passage of the act, bankruptcy rates rose steadily until 2005, when Congress passed the Bankruptcy Abuse Prevention and Consumer Protection Act (BAPCPA). BAPCPA was signed by President George W. Bush on April 20, 2005, and applied to bankruptcy cases filed on or after October 17, 2005. The reform caused a large and permanent reduction in bankruptcy filings. In this post, we study the mechanism behind this drop and the consequences for households.

Households in financial distress have the option of filing for bankruptcy. Upon filing, debtors obtain immediate relief from all collection efforts, including lawsuits, wage garnishments, and direct communications from creditors. Chapter 7, or “fresh start,” bankruptcy is the most commonly used procedure, accounting for 70 percent of all filings. Assets exceeding certain exemption levels are used to satisfy unsecured creditors and the rest of the debts are discharged. Under Chapter 13, filers keep all of their assets but must use their future income to repay part of their unsecured debt. Most unsecured debt is dischargeable under either chapter, excluding most taxes, student loans, alimony and child support obligations, and debt obtained by fraud. Bankruptcies remain on a debtor’s public record for seven years (Chapter 13) or ten years (Chapter 7).

BAPCPA introduced several major changes to the bankruptcy code that increased the burden, monetary and otherwise, of filing for bankruptcy protection. Among the most notable of the new features are an income “means test” that determines eligibility for filing for Chapter 7 bankruptcy; elimination of the option for filers to propose their own Chapter 13 plans; new standards against fraud that render attorneys liable for the accuracy of claims; and mandatory credit counseling for filers. These requirements substantially increased the documentation burden associated with filing. There was also a substantial rise in the monetary cost of filing, with a median increase of 38 percent in attorney fees, which account for 75 percent of the cost of filing.

To assess the implications for BAPCPA, we estimate the transition probabilities of individuals across various credit states. These estimates give us an indication of the timing and overall magnitude of the response. We find that the 2005 reform is associated with a drop in bankruptcy and increases in both insolvency and foreclosure immediately after the introduction of the law. We also show that these effects are much larger for low-income individuals and for those in court districts that experienced the largest increases in filing costs. We interpret these results as being consistent with the hypothesis that liquidity constraints—that is, the inability to afford the higher cost of bankruptcy—were responsible for the reduction in bankruptcy filings. We also show that insolvency is associated with a higher degree of financial distress compared to bankruptcy, suggesting that the reform may have been negative for households.

Mechanism Behind the Drop in Bankruptcies

We assess the impact of the reform by estimating the frequency transition probabilities of individuals across different credit states over time. To do so, we use the FRBNY Consumer Credit Panel (described here). We identify a set of mutually exclusive and exhaustive credit states, which include Bankrupt (either chapter), Insolvent (individuals with accounts that are 120 or more days late or charged off), Delinquent (those with accounts 30, 60, or 90 days late who are not insolvent), and Current. We include each of these states with and without the foreclosure flag. We start from Delinquent and look at the four-quarter-ahead transition probabilities into other states.

The charts below present the estimated transition probabilities into four of the possible states, specifically Insolvent, Current, Bankrupt without foreclosure, and Foreclosure. The blue lines correspond to the overall population, while the dashed red lines correspond to the first quintile of the credit score distribution (that is, the lowest credit score quintile), where the credit score is measured four quarters prior to the estimated transition. The vertical line corresponds to the first quarter of implementation of the reform.

See also  Should I Tell My Creditors I Am in the Process of Filing Bankruptcy? - Sofia The fact that the response to the bankruptcy reform is much more pronounced for individuals with low credit scores, together with the large rise in the monetary cost of bankruptcy associated with the reform, suggests a natural explanation for the mechanism that leads to the drop in bankruptcy filings—that is, the presence of liquidity constraints.

We support this hypothesis in two ways. First we show that individuals with low credit scores have lower income relative to other individuals. We then proceed to exploit the sizable cross-district variation in the rise in filing costs, and show that a larger rise in filing costs is associated with a bigger decline in bankruptcy and a larger rise in insolvency and foreclosure.

We now turn to the variation in filing costs across court districts as well as the change in these costs associated with the reform. Summary statistics on these costs are presented in the table below. Insolvency versus Bankruptcy: Does It Matter?

We have shown that the 2005 bankruptcy reform led to a sizable increase in insolvency. The question is, does it matter? If insolvency is essentially equivalent to bankruptcy, we could conclude that the rise in insolvency is inconsequential. Using the Consumer Credit Panel, we examine additional indicators of financial distress, as well as the rate of access to new lines of credit for individuals who go bankrupt and those who just remain insolvent. We also examine the evolution of these individuals’ credit scores.

See also  If Bankruptcy is a Smart Move for Borders. Why Do People Needlessly Add Stigma to Personal Bankruptcy?

We first consider balances in collections and court judgments. The latter originate from unpaid alimony, medical debt, and wage garnishment orders. We consider cohorts of individuals who become insolvent at a given quarter after a two-year spell with no insolvency, and we separate them based on whether they do or do not go bankrupt in the eight quarters after their insolvency. We examine them for sixteen quarters around the date in which they become insolvent. 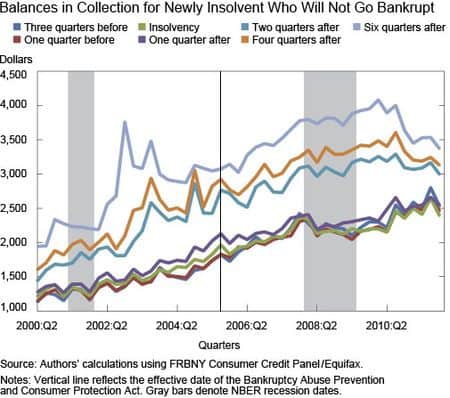 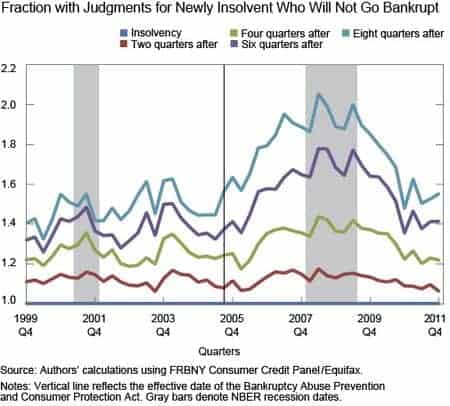 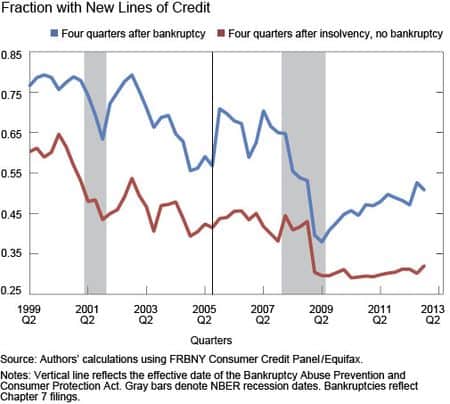 Our analysis suggests that the 2005 bankruptcy reform negatively affected individuals who became delinquent by increasing the probability that they would become insolvent, a state associated with a high degree of financial distress. However, since the recovery rates for creditors from insolvent loans are higher than those from bankrupt loans, this could have induced banks and credit card companies to expand access and improve conditions on personal loans. Indeed, a recent study finds that BAPCPA reduced credit card company losses and increased their profits. However, there is little evidence that terms for consumers, including interest rates, fees, and so on, improved.

Taken together, these findings suggest that the 2005 bankruptcy reform was associated with a large and persistent reduction in bankruptcy filings and a rise in insolvency and foreclosures, concentrated primarily among low-income individuals in court districts with the largest increases in filing costs. This is consistent with the notion that the increase in filing costs is driving these responses. Moreover, we show that insolvent individuals who do not go bankrupt exhibit more financial stress than those who do, suggesting that these individuals would likely prefer to file for bankruptcy if they could afford it. – Source