I received an email from a reader, along with a filed complaint, who expressed some serious concerns about two companies selling debt settlement services; Financial Rescue, LLC and Success Link Processing, LLC.

The reader sent in the following statement:

“In August of last year, I enrolled in this company from Financial Rescue LLC in Milpitas, CA. They are a local run company, I saw on TV. They entered me and my mother in a company named Success Link Processing LLC which we knew nothing about.

Financial Rescue took all our information over the phone and pulled our credit reports which was convenient so I did not have to dig paper work that I might not have anymore.

The explanation from the person from Financial Rescue sounded so good, it made us feel like it was going to be a walk in the park. Our accounts were going to be personally handled by an attorney, she said. A notary came to our house and breezed through the agreement and the next thing we knew, we have signed up and were enrolled with Success Link Processing LLC.

A few months went by and we were surprised when my mother was served with a summons by a process server which gave us 30 days to reply from the day she was served. This is when the nightmare started.

Finally the summons, they said was assigned to their arbitrator. I was calling them daily to get an update and they just kept saying they are taking care of it. 30 days went by and we were not told to do anything except wait. One day, another letter came in the mail and it said that my mother had a judgment. I immediately called Success Link Processing to tell them what we received and the person there just said that there was nothing they can do about the judgment. I told them that the arbitrator told me they were talking care of it. They said that they had no attorney to fight the summons. So I asked them why they were charging me retainer fees and legal plan fees and all other kind s of fees every month.

It was getting frustrating and we were going nowhere. Worst is we were scared out of our minds and we did not know if we were going to jail or what.

One day when I called a girl answered the phone and she was were pleasant. She advised me that she was leaving that company because she could not bear what they were doing to their clients. They were just taking their money every month without providing any service. Then she said that the owner of Financial Rescue and Success Link was the same person and the employees of Financial Rescue were also the employees of Success Link Processing. She also said there was no attorney for the program. That’s all a big lie.

As I asked her more questions, more disgust was eating away from my gut and I wanted to cry but at the same time I was so angry that I was so stupid and let this happen to my mother.

She also told me that they were all in the Philippines and there were a few employees in the US, but most calls get forwarded to the Philippines. That explains why the person I was talking to most of the time sounded so sleepy because of the time difference and nothing happened to our debts.

Then she proceeded to explain that the program they were using was not secure. Any employee can go into an internet cafe and pull all the information of a client. The next day when I called to talk to the manager, that girl was not working there anymore. I asked for the Manager and I was given a person who could not hardly speak Tagalog, Philippine language.

When I told her I wanted to get all my money back, she started screaming at me. Then they said they will refund only what was in my trust account until I told them I was going to report them to the Police and she started laughing and said they are not going to do anything.

But then they said she would refund most of the money but they cannot return the retainer for the attorney. I asked, What attorney? I was told there was no attorney by a girl the other day. She said that girl did not know what she was doing that’s why she was not there anymore.”

Is Any of This True?

The reader sent in a statement of fees and the statement makes it appear the debt settlement program is front loaded. You can see the “service fee” being taken out at the start of the program. Also not there is a $400 charge for some sort of legal plan enrollment. 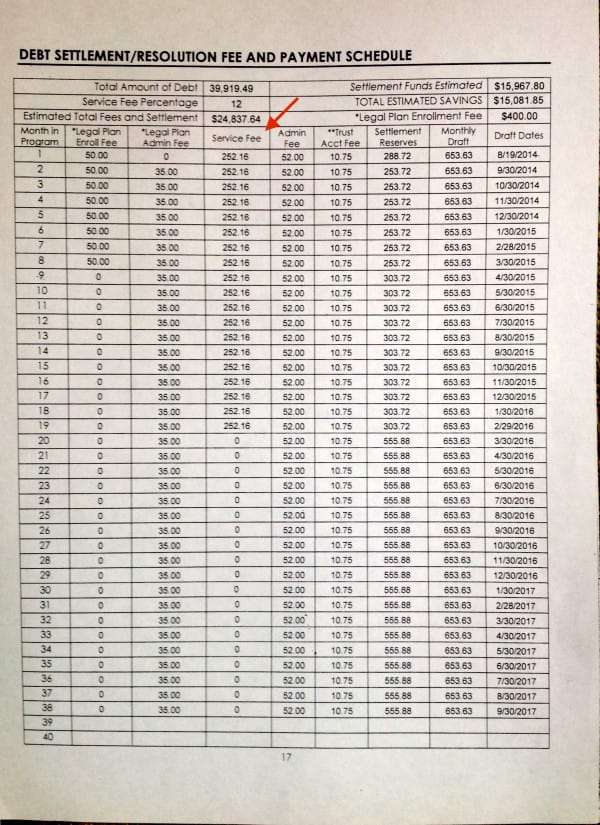 As you can see those are not the only fees charged. For the first eight months the consumer was allegedly being charged a legal plan enrollment fee, legal plan admin fee, service fee, admin fee and trust account fee. Presumably these fees were being taken out as the money was coming in. In just the first eight months the fees alone add up to about $3,150. The total service fee charged is $4,791 or about 12% of enrolled debt.

The reader said the two companies were working closely together. It appears they do share the same street address at 416 S. Hillview Drive, Milpitas, California 95035. The Google street view picture from 12-2013 shows 416 is occupied by Financial Rescue, LLC. 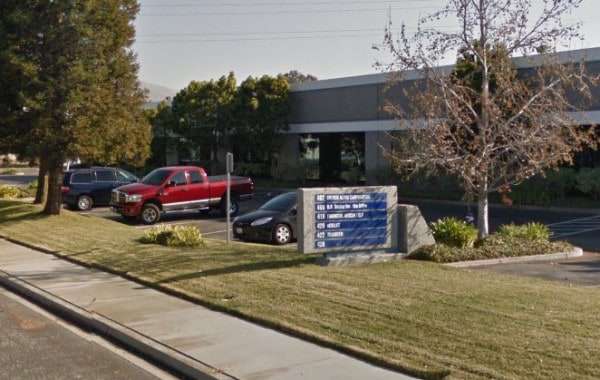 A consumer testimonial on the Financial Rescue, LLC site also mentions both companies. 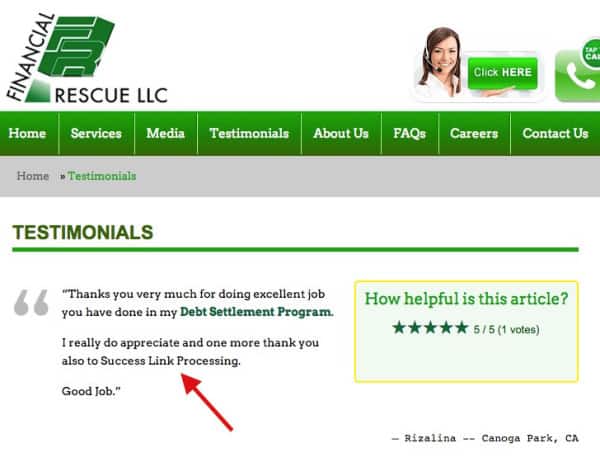 Another testimonial says a consumer learned about Financial Rescue from television as the reader who wrote me said they had.

Could this have been the advertisement?

“Financial Rescue LLC filed as a Domestic in the State of California on Wednesday, July 23, 2008 and is approximately seven years old, according to public records filed with California Secretary of State. The filing is currently active as of the last data refresh which occured on Sunday, June 22, 2014.

Marilyn Labre serves as the Member

Dolores Mercado is the Member of Financial Rescue LLC.

The registered agent for the company is Corporation Service Company. Also known as a statutory or resident agent, the registered agent is responsible for receiving legal notifications regarding court summons, lawsuits, and other legal actions involving the corporate entity.

Financial Rescue LLC also lists another corporation as a key member of the company. Caamarketing Services serves as Member.” – Source

The BBB says a Rod Mercado is the President/CEO. And that the company is a “marketing programs & services” company. The BBB gives the company an A+ rating and lists no complaints. – Source

They also promote they are IAPDA certified.

Success Link Processing LLC filed as a Domestic in the State of California on Wednesday, April 18, 2012 and is approximately three years old, according to public records filed with California Secretary of State. The filing is currently active as of the last data refresh which occured on Sunday, June 22, 2014.

Rodolfo Mercado serves as the Member

The registered agent for the company is Corporation Service Company. Also known as a statutory or resident agent, the registered agent is responsible for receiving legal notifications regarding court summons, lawsuits, and other legal actions involving the corporate entity.

The footers of both the Financial Rescue and Success Link Processing websites mention a “Legal Plan” service but the sites seem to provide no other information about the plan.

The web server for the domains is interesting. The server hosts only the following domains:

I Reached Out to the Company

I contacted the company yesterday in hopes of establishing some line of communication to hear what their response was to the consumer statements. As of the time of publication I have not heard back from them yet.