My mom received a letter stating that she is eligible to cut her debt in half and citing a federal bill that mentions tax relief, so she called the company, thinking the plan was a federally approved program.

I overheard the conversation and got on the phone with them myself. This company told her they will remove all negative marks on her credit and will essentially remove all of her debt.

When asked how they do that, they said they ask their client to stop payments on all debt (citing that creditors have no right to her money), in which they will file claims against the debt unendingly until the company basically gives up on collections.

I argued with them that their method would ruin my mom’s credit and that it sounds illegal to ask her to stop paying her bills. They said her credit would go down slightly for two months, but then it would go back up much higher when the debt is removed from her credit. Which I know is BS.

They used a lot of circuitous language that didn’t have any substance, and I told them we were not interested in their services. They claimed to be a company called “Priority Documents” in San Diego, and to look them up online, but wouldn’t give me an actual website.

What I found was they used the name of an actual company called Priority Documents, but it isn’t a debt relief company. The phone number we called them on was 877-937-9358, and asked for Rob at extension 129. I asked the person answering the phone (when we called back a second time) what the name of the company is, and they just said they housed many companies – no name given.

It was very sketchy, but I can see how convincing they’d be to someone vulnerable to their initial professional and legit appearance.

See also  Company is Chasing Me for a Debt I Don't Owe. What Do I Do?

It sounds like a call center. I looked up the number you gave me and others are complaining about receiving debt calls from this number. Some of the people appear to have entered into a repayment program with the folks on the other end of that number.

I would have a difficult time agreeing with any of the claims they made to you regarding the handling of your mother’s debt. The claims appear to be very problematic.

I agree with you, it is very hard to tell exactly who the company is or who you were talking to. And as you said, there is a company in San Diego named Priority Documents, who claims to do a lot of things, one of which is actually debt relief related. You have to scroll down in their big list of service to find it. 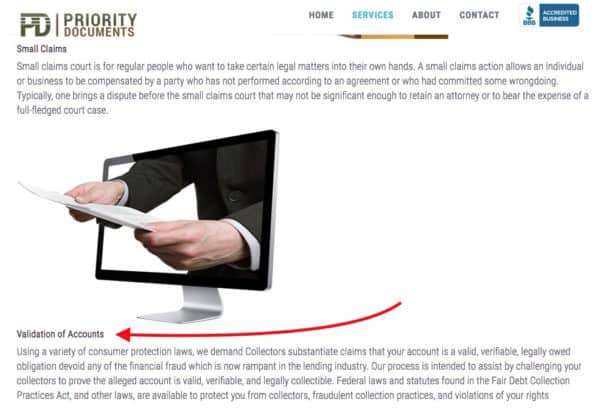 I will go ahead and email the company with a link to this post and ask them to come in and comment on the post to clear up any confusion with the similar name or what you heard promised on the phone.