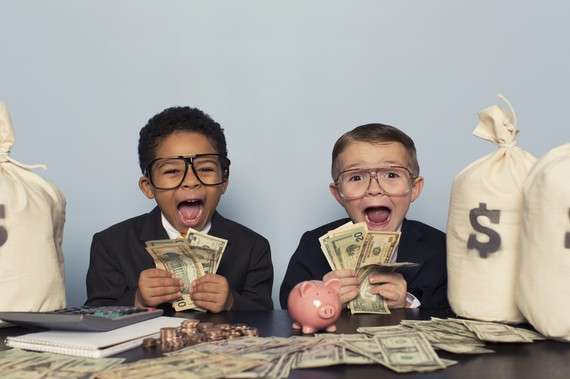 If you’ve been to the corners of social media you may have seen posts offering a CPN to get credit with. A CPN is a Credit Profile Number, Credit Protection Number, or Credit Privacy Number which is used in place of your social security number to get credit.

I’ve written about CPN numbers in the past and my research always painted a dark picture.

See this post of an FTC suit and final judgment against an individual for adding tradelines and authorized user to improve credit scores.

But when an insider dumped a ton of information to me on current CPN marketing efforts, I took another glance to see if things have changed.

Good People All Caught in Ignorance, Denial, or Deception

At first glance, the postings of people pushing CPNs for sale seems like hustling hard-working people pushing what they believe is a legit tool to get better credit.

This guy Mike is behind an effort to sell CPNs. Alena seems totally on board as well. 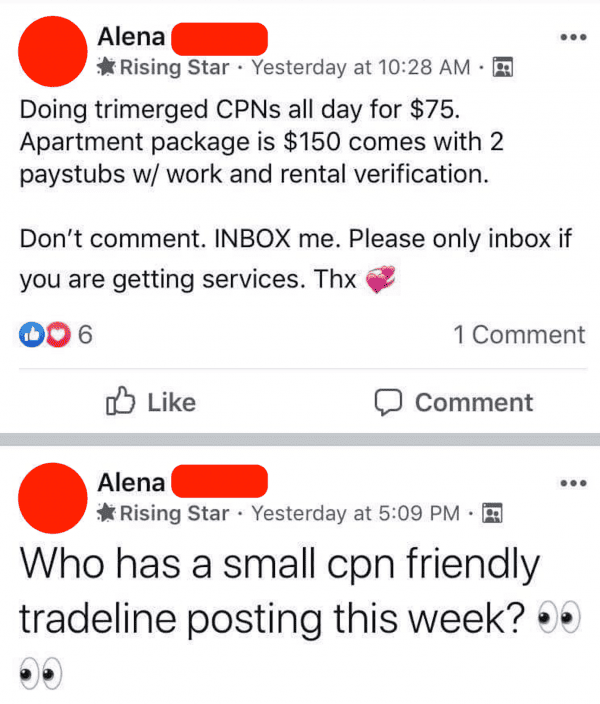 But What is Fact and What is Blind Belief or Fiction?

Credit Profile Numbers are sold as a replacement for a valid nine-digit Social Security Number assigned to an individual. And it is just a number until someone uses them instead of their actual Social Security Number. You can buy all the CPNs you want but the moment you use one, then the entire story changes.

There are a lot of people who believe the use of a CPN is legit. Just look at this past comment on a post I wrote in 2014. And this one is just the tip of the iceberg in believer blowback. Cecilia is a believer. Read About More People Landing in Jail Over CPN, Trade, and Credit Sweeps.

But you know who is not a believer, Timatress.

“Real, misappropriated SSNs, often assigned to children, are stolen and sold online as “credit profile numbers,” “credit privacy numbers,” or “credit protection numbers” (collectively “CPNs”). CPNs are marketed to individuals who have a poor credit history as a way to obtain credit cards, loans, and other lines of credit for which they would not otherwise qualify. The criminal complaint filed by the United States against Timatress clearly states what the problem is in using CPNs.

It was the purpose of the scheme that CADE used CPNs to misrepresent her SSN to banks, credit unions, credit card issuers, retailers, and other lenders in order to represent to lenders that she had a credit history more favorable than she had actually earned for purposes of obtaining loans for personal expenses, vehicles, and other merchandise.

That sure sounds like what the social media posters are pushing people to do.

“It was part of the scheme that:

a. CADE obtained a CPN, which was actually a misappropriated SSN. In particular, CADE obtained the following SSNs, which the Commissioner of Social Security had previously issued to children born in 2006 and 2009: XXX-XX-0955 and XXX-XX-4320.

b. CADE caused CRAs to create fraudulent credit profiles using her name and the misappropriated SSNs.

f. Lenders thereafter issued credit to CADE believing that her credit history was different than it actually was.

g. CADE obtained personal loans, as well as a vehicle and other merchandise purchased on credit, and thereafter made little to no payments on the credit accounts, causing losses to the lenders.” 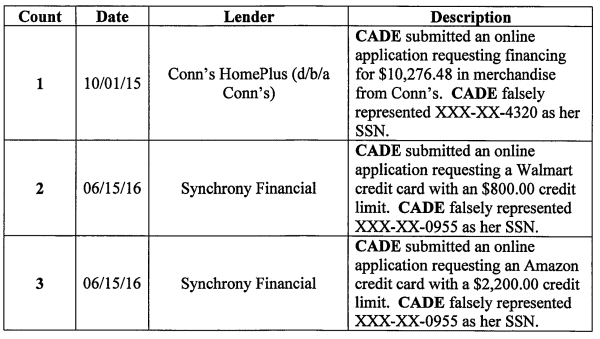 So how can what Dexture is selling online be risk-free or legal? Let’s go with, it’s probably not.

The criminal charges against Timatress continue to pile up.

The allegation was that Timatress made false statements to a financial institution and falsely represented her Social Security Number.

You can read the full unsealed court document below.

So How Did This End for Timatress

Timatress was ordered to pay restitution of $68,637 and was sent off to jail.

Demarr Greer was also charged by the United States for using a CPN in the application for credit.

The criminal complaint says, “DEMARR FANNELL GREER devised and intended to devise a scheme to defraud credit card issuers, automobile dealers, and other lenders in a material manner, and to obtain money and property by means of materially false and fraudulent pretenses, representations, and promises, through the use of CPNs.

It was the purpose of the scheme that GREER used CPNs to misrepresent his SSN to credit card issuers, automobile dealers, and other lenders in order to falsely represent to them that he had a credit history more favorable than was actually the case, for purposes of obtaining credit cards, vehicles, and other merchandise.”

This criminal complaint lays out how Demarr may have purchased one of the CPN being peddled online like in this social media posting. Did Demarr know the CPN he acquired was actually a stolen Social Security Number? Probably not. How would he know by looking at a nine-digit number?

“It was part of the scheme that:

a. GREER obtained a CPN, which was actually an SSN appropriated from a real person, who was bom in 2004.

d. GREER thereafter used the misappropriated SSN to submit materially false and fraudulent loan applications to credit card issuers, automobile dealers, and other lenders in order to obtain credit cards, and purchase vehicles and other merchandise.

f. Lenders thereafter issued credit to GREER believing that his credit history was better than it actually was.

g. GREER obtained credit cards and an automobile using a CPN, and thereafter made little to no payments on the credit accounts, causing losses to the lenders.”

You can read the full indictment below.

According to the Department of Justice, “DEMARR FANNELL GREER, 39, of Edmond, Oklahoma, has been sentenced to 24 months in prison for fraudulent use of a Social Security Number, announced Robert J. Troester of the U.S. Attorney’s Office.

On April 17, 2018, a federal grand jury charged Greer with using interstate wire communications to defraud credit card issuers, automobile dealers, and other lenders between February and August 2016. According to the indictment, Greer obtained the Social Security Number of a person born in 2004 and used it as a “credit profile number”—also known as “credit privacy number” or a “credit protection number”—to establish what appeared to be good credit with consumer reporting agencies, such as TransUnion and Experian. After establishing good credit, he allegedly used the number to apply for a Discover Card and for a lease on a 2016 Dodge crew cab pickup. The indictment alleges he made little to no payments on his obligations and thus caused losses to businesses that had extended credit to him.” – Source

So There You Have It

My apologies if you fell for my clickbait headline but for all the readers who came believing CPNs were legit and risk-free, I guess I have to quote Mike from above and say, “Keep the hate energy and crab in a barrel ass mindset to yourself please.”

I didn’t want to lose this reference that relates to this post so I’m adding it here.

When it comes to using new numbers in place of the valid Social Security Number, the tactic is not new.

Here is an old warning from the Department of Justice regarding similar issues.

“CROA also prohibits “file segregation” schemes, which are advertised as a way of creating a new credit identity. File segregation operators advise the consumer to apply to the IRS for an Employer Identification Number (“EIN”). Consumers are told to use the EIN in lieu of their Social Security Number when applying for credit, in order to create a completely new credit file in which the old debts will not appear. The scheme essentially involves an attempt to hide one’s identity from creditors by getting credit with the EIN and a name and address that differ slightly from accurate identifiers.

Both the person selling such a scheme and consumers who follow the scheme are violating the law. CROA bars any person from making or counseling any consumer to make any untrue or misleading statement whose intended effect is to alter the consumer’s identification to hide accurate credit information. 15 U.S.C. § 1679b(a)(2). Consumers following such advice may be committing felonies. See 42 U.S.C. § 408(a)(7)(B) (falsely representing a number to be the social security account number); 18 U.S.C. Â§ 1014 (false statement on credit application). In 1999, CPB (Consumer Protection Branch of the Department of Justice) brought a series of cases seeking injunctions and civil penalties against businesses that offered “file segregation” schemes. – Source

By the way, I’ve forwarded all my documentation uncovered in this story to the Department of Justice, FBI, Federal Trade Commission, and Consumer Financial Protection Bureau.