Forget the idea that we can’t let facts and science guide a logical response to the current pandemic. Let’s put that aside. What is clearly an imminent threat is the closing window of public support through unemployment assistance or eviction forbearance that has helped many people through these difficult months while they await a return to the pre-virus reality.

One in five of the 110 million Americans who live in renter households are at risk of eviction by the end of September.

But the assistance which has kept many afloat in record unemployment is on the verge of ending. And when it ends, millions will no longer be able to care for themselves in the absence of jobs, and they face eviction.

The Aspen Institute has estimated the number of people that will face eviction after July 2020 is between 19-23 million Americans.

Not only will mass evictions gut fragile communities, but it will also lead to more civil unrest by all sorts of factions. If you push people into desperate corners they take desperate action. 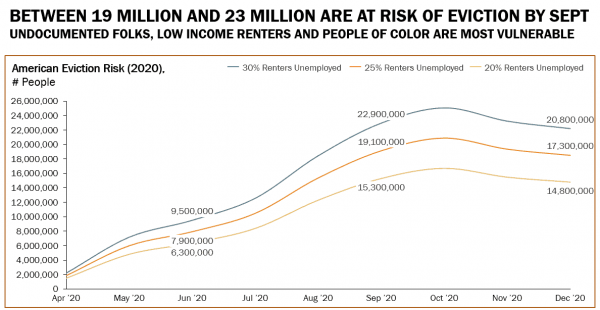 It’s time to consider the impact of mass evictions to all communities. These types of events often lead to the Law of Unintended Consequences where an action in one part of the country leads to a negative impact in another. Mass trauma is never neat or tidy.

Even if state or local lawmakers extend eviction holidays it does not address the eventual bill that will come due and the impact it will have.

If the government and our leaders don’t step up to stop this wrecking ball from dropping this mess is going to leave a big wound.