A tipster (send in your tips here) sent in the following mailer they received and had some statements about it.

If you received a form 1012-R mailer the California Bar Association wants to hear from you. Click here.

Although it is a poor copy, you can see the mailer tries to look like an official form using the form number 1012-R and the large 2011. I wish I saw what the front of it looked like. If anyone gets one of these, please submit it to me using this form and be sure to include the front of the mailer.

The mailer says it is a Litigation Settlement Notification which could be interpreted as a settlement already exists and the receiver of this mailer is being notified of it. The advertisement says the settlement is to “void note,” and the status is “pending.”

Our team of lawyers specialize in lender fraud and we are notifying you to discuss settlement arrangements. The attorneys are at the top firms in the nation and have represented hundreds of homeowners with these cases. Prior settlements with these banks have been successful which have included cash settlement and properties rewarded free and clear homes. 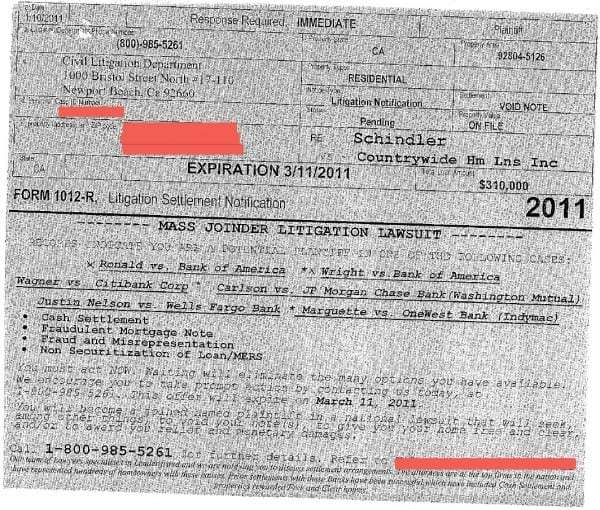 The form appears to highlight three cases in particular and says, “Records indicate you are a potential plaintiff in one of the following cases:” Three cases are marked with either a X and/or *. Not sure what the marks mean since there is no apparent legend.

I did a Google search for the cases mentioned in the mailer. – Source

One of the links in the search results was to a press release put out by Brookstone Law that said the firm “has contracted to aggregate members for other suits against leading banks and mortgage lenders including:”

I am unaware for who Brookstone Law has contracted to aggregate members for.”

The cases bolded above from the press release appeared in the mailer.

After publishing this other article I was made aware that Brookstone Law and The Law Offices of George Baugh filed the case Wright vs. Bank of America. – Source. That case was also mentioned in the mailer.

I called the phone number in the mailer but I was unable to speak with anyone about it. When you call 1-800-985-5261 the recorded message identifies it as “The Litigation Settlement Department” and says that messages left will not be returned for three or four days.

Others that received a similar notice, but with a different telephone number in it of 800-368-9659 made some observations after speaking with representatives regarding the mailer. You can read what people had to say here.

The address given in the mailer is:

A Google search identifies that address as a mailbox rental service called The Mail Room. – Source. I called and they verified the address is for The Mail Room.

The message in the mailer says:

You will become a joined named plantiff in a national lawsuit that will seek, among other things, to void your note(s), to give you your home free and clear, and/or to aware you relief and monetary damages

I am unaware if the mailer was sent out by a law firm. It does not seem to comply or contain advertising disclaimers typically or required to be used in California regarding legal service advertising. – Source

I did find a another search hit for Form 1012-R. The law firm Hartford Dunn published the following form. – Source 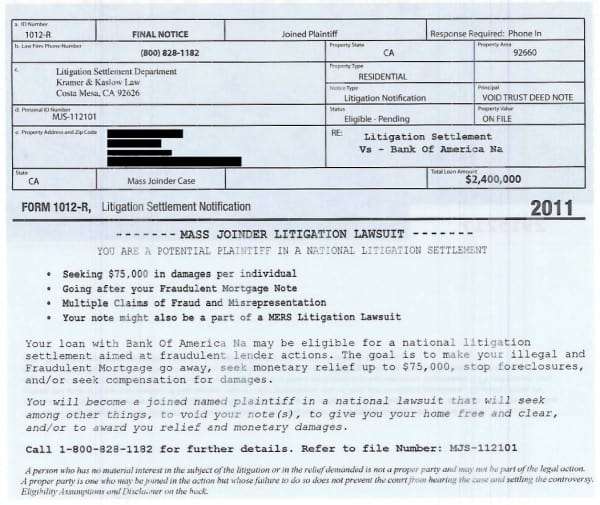 The form from Kramer & Kaslow Law contains a similar format and some of the same language as the one sent to me by the tipster (send in your tips here).

The Hartford Dunn site has an interesting disclaimer regarding the Ronald vs. Bank of America case listed and the form above. They say:

Hopefully someone will be able to send me the front of the next mailer so we can see the entire marketing piece.

3-2-2011 / 2:17 PM: A tipster (send in your tips here) has sent in the front of the Litigation Settlement Notification mailer. See below. Postal permit number is Anaheim 904. 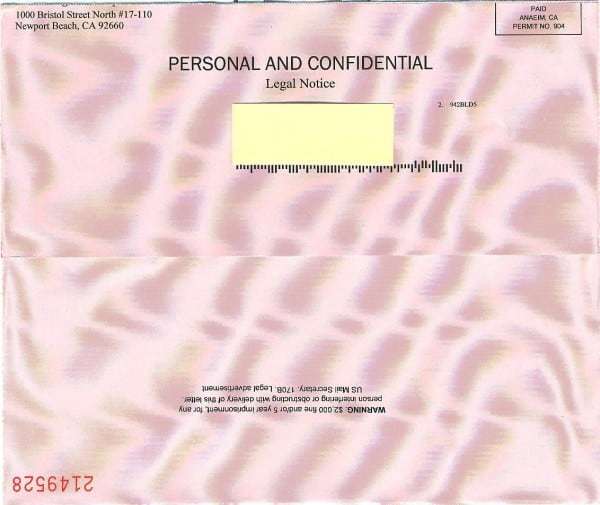 It now appears the original mailer did come from Brookstone. A reader just sent in the following mailer and the telephone number went to Brookstone as you can see by his comment. I received a form 1012-R from Civil Litigation Department 1000 Bristol Street North #17-110 Newport Beach, CA. 92660; the notice instructed me to call 1-800-985-5261 for further details; i called the number and and then arranged for me to speak to a person whose name was David Hamilton who works for Brookstone law as a client service representative and his contact number is 1-800-946-8655 Ext. 445; he explained what their law firm does and convinced me to send a copy of one of my home loans and proof of title to my residence as one of their requirements to qualify for the Mass Joinder litigation lawsuit. He discussed the Paul Ronald vs. Bank of America and Wright vs. Bank of America case with me. After speaking to him, he then instructed me that another person from brookstone law firm will contact me in an hour or two. Soon enough, a Carl Centerfold ( i’m not sure how he spells his name), who works in the quality control department for Brookstone law, contacted me and ask me more questions