GHS Solutions, through its websites at ghssolutions.com and debtsettlementsource.com sold debt settlement services under the California prorating law. The Plaintiff states that after eleven months of payments and placing $12,000 in his trust fund, GHS failed to “complete debt settlement negotiations and pay Plaintiff’s creditors and return monies tendered by Plaintiff.”

The complaint alleges that GHS acted fraudulently and Global Client Solutions aided in that endeavor. The Defendant states they were not advised by GHS that GHS would take no action until all the advanced fees for debt settlement services had been paid, GHS would not communicate with the Plaintiff’s creditors, GHS made his financial situation worse, and by following the advice of GHS, it resulted in judgments, wage garnishments, and potential liens and levies.

It is stated that, “as a direct and legal result of the foregoing fraud, deceit and misrepresentation by Defendant GHS, Plaintiff has suffered harm and severe emotional distress, including mental distress, fraud, deceit and misrepresentation by defendants, and each of them, mental suffering, mental anguish, fright, nervousness, grief, anxiety, worry, mortification, shock, humiliation, indignity, physical pain, and other highly unpleasant mental reactions, now and into the future.”

I have to admit, I think this is the first debt settlement suit I’ve seen that includes mortification. Interesting twist.

It is also stated that the Defendant’s in this case were in volition of the California Financial Code §12200 which required licensing and a surety bond for all licensees.

No person shall engage in the business, for compensation, of selling checks, drafts, money orders, or other commercial paper serving the same purpose, or of receiving money as agent of an obligor for the purpose of paying bills, invoices, or accounts of such obligor, or acting as a prorater, nor shall any person, without direct compensation and not as an authorized agent for a utility company, accept money for the purpose of forwarding it to others in payment of utility bills, without first obtaining a license from the commissioner.

Also, it is claimed the Defendants violated California Financial Code §12315 which states,

A prorater shall not receive any fee unless he has the consent of at least 51 percent of the total amount of indebtedness and of the number of creditors listed in the prorater’s contract with the debtor, or such like number of creditors have accepted a distribution of payment.

The total charges received by a prorater, or any other person for the prorater’s services, may not exceed in the aggregate twelve percent (12%) for the first three thousand dollars ($3,000), eleven percent (11%) for the next two thousand dollars ($2,000), and ten percent (10%) for any of the remaining payments distributed by a prorater to the creditors of a debtor, except for payments made on recurrent obligations. Recurring obligations shall be defined for the purpose of this section as follows: current rent payments, current utility payments, current telephone bills, current alimony payments, current monthly insurance premium payments, and payments made on obligations which are secured by a first mortgage or first deed of trust on real property.

(b) A fee not to exceed four dollars ($4) per disbursement on recurring obligations, consisting of current rent payments or obligations which are secured by a first mortgage or first trust deed on real property, may be charged.

(c) A fee not to exceed one dollar ($1) on other recurring obligations.

When a debtor has not canceled or defaulted on the performance of his contract with the prorater within 12 months after execution of the prorate contract, the prorater shall refund any origination fee charged to the debtor. At least once each month the prorated shall pay not less than 70 percent of all funds received from the debtor to the creditors of the debtor.

If you click on the image below you can read the original complaint. 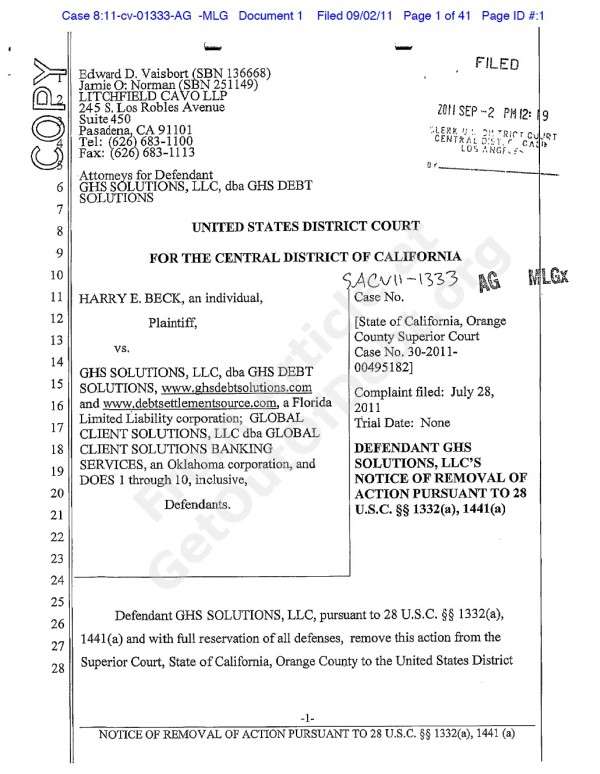