For many, many years now I’ve been the chicken little saying the sky is falling when it comes to student loan debt. Ever since the bankruptcy code was changed to prohibit the discharge of student loan debt, both government and private student loans, a national crisis has been building pressure.

Student loans are looked at as “good debt” and people take them on thinking they are doing a good thing. And while in recent years past there was outrage over credit card marketing on campus, simultaneously students were loading up on non-dischargeable student loan debt at increasing rates. The credit card debt was always the much smaller problem with students.

According to the Federal Reserve, “the outstanding student loan balance now stands at about $870 billion, surpassing the total credit card balance ($693 billion) and the total auto loan balance ($730 billion). With college enrollments increasing and the costs of attendance rising, this balance is expected to continue its upward trend.” 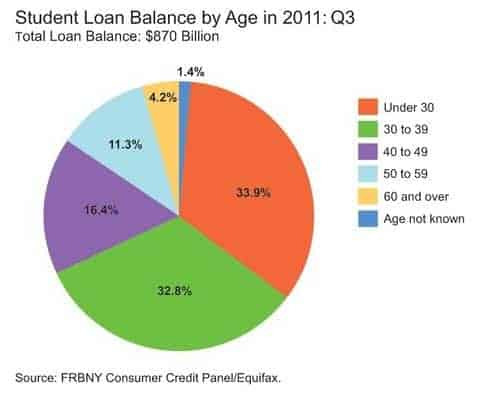 With the growing burden of education, building, there will come a time when people will not be able to follow their passion and innate skills into careers but will be required to pursue professions will pay them enough to service their student loans.

And according to a Los Angles Times story, the growing burden of student debt is causing students to take on debt but not graduate.

W. Norton Grubb, a professor at UC Berkeley’s School of Education, is worried that rising debt levels are forcing some students to drop out. Only 40% to 50% of those enrolling at universities such as the California State University schools end up completing their degrees, he said. – Source

Students that drop out and owe student loan debt are on the hook for the loans and without the benefit of the degree. This is the worst possible position to be in yet I’ve heard the number of people in the same spot is as high as 75 percent of people that have attended college.

When you look at the student loan data and extract out the total loans that are in deferment and not scheduled to be currently paid you discover that 27 percent of student loan payments are past due.

Student loan debt is a litteral crisi that is going to create an economic drain for countless people and if they owe on private student loans, they will be effectively stranded without options. 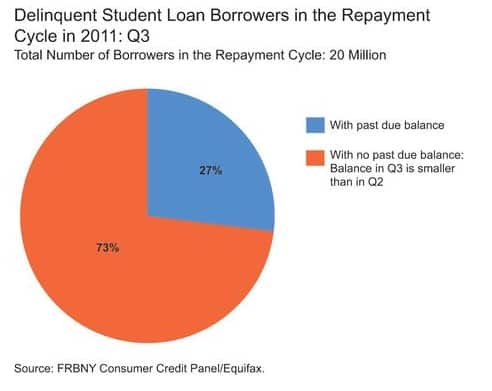 I invite you to help me raise awareness for legislation stuck in Congress to help students with loans. Please sign the petition to help pass the Fairness for Struggling Students Act.

Latest posts by Steve Rhode (see all)
See also  I Enrolled Into Westwood College Online for a Career in Criminal Justice. - Matthew

1 thought on “One of Every Four Student Loans is in Default. National Economic Crisis Boiling.”