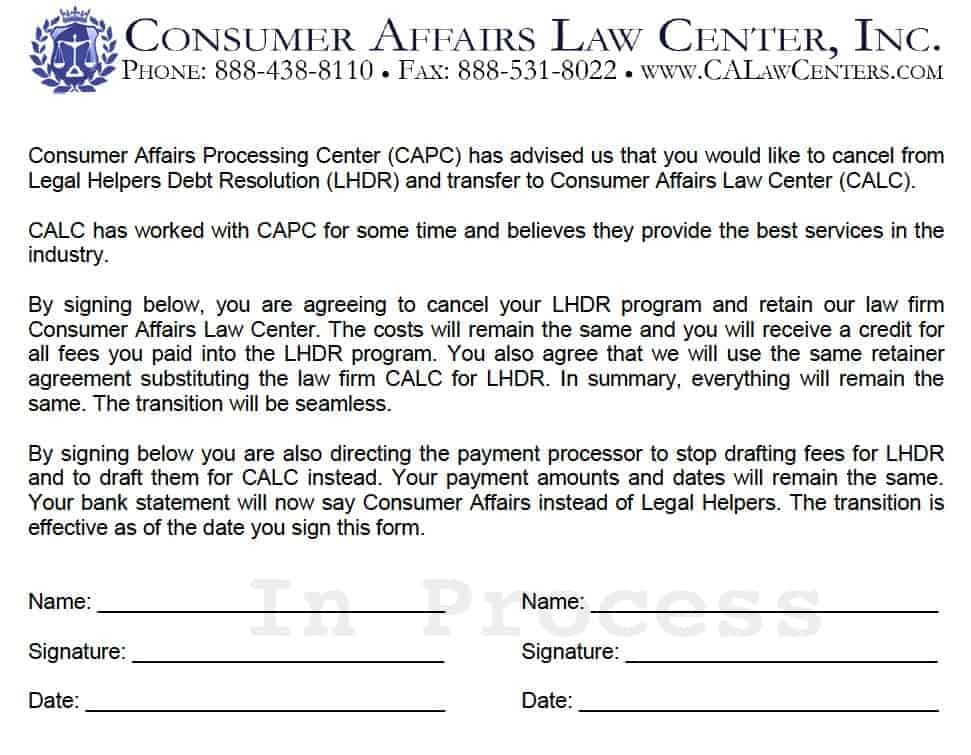 Yesterday I wrote about a consumer that contacted me and said Legal Helpers Debt Resolution contacted them after terminating all the LHDR affiliates and told her LHDR would be transiting their account to Consumer Affairs Law Center.

I asked the consumer to send me the form to look at and after reviewing it I’m entirely puzzled why since she is a Legal Helpers Debt Resolution client she would be claimed to cancel her services and transfer her account to another entity. It makes no sense.

CALC has worked with CAPC for some time and believes they provide the best services in the industry.

By signing below, you are agreeing to cancel your LHDR program and retain our law firm Consumer Affairs Law Center. The costs will remain the same and you will receive a credit for all fees you paid into the LHDR program. You also agree that we will use the same retainer agreement substituting the law firm CALC for LHDR. In summary, everything will remain the same. The transition will be seamless.

By signing below you are also directing the payment processor to stop drafting fees for LHDR and to draft them for CALC instead. Your payment amounts and dates will remain the same. Your bank statement will now say Consumer Affairs instead of Legal Helpers. The transition is effective as of the date you sign this form. – Source

What makes this form very, very strange is the fact the consumer was contacted directly by Legal Helpers Debt Resolution and told to sign this form which terminates the agreement with Legal helpers Debt Resolution. And then it instructs the unnamed payment processor to redirect funds to Consumer Affairs Law Center instead.

Who is Consumer Affairs Law Center? 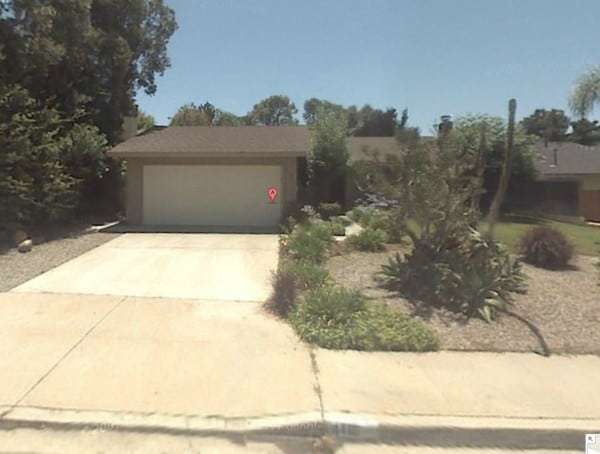 Consumer Affairs Law Center is not registered as a professional corporation.

The site gives the name of only one attorney, Thomas A. Moore. It’s puzzling why Legal Helpers Debt Resolution would terminate a client account and send it to this lawyer that claims all sorts of expertise, except for extensive experience in debt resolution?

Tom has been practicing law for the past twenty years, specializing in complex litigation and business development. Tom attended Chaminade University of Honolulu, graduating Magna Cum Laude. Thereafter, he attended Hastings College of the Law, and immediately began practicing law in the San Francisco Bay Area. After three years of representing clients in high profile litigation in Northern California, Tom was recruited to work for one of the largest law firms in Southern California where he specialized in the representation of pharmaceutical companies and medical devices manufacturers. Tom was later recruited to run the Los Angeles office of a major medical malpractice defense firm, successfully representing hundreds of doctors in the defense of medical malpractice claims. Tom has continued to successfully represent large insurance companies in the negotiation and recovery of million dollar insurance claims, as well as representing large companies in the private sector in commercial/business litigation. Over the last several years Tom has recovered millions of dollars in subrogation on behalf of the Insurance Companies he represents. Presently, Tom is working with a network of attorneys who are helping consumers who need financial restructuring. Through many different types of legal programs available to consumers today, Tom felt like he could help many of those who need help in today’s economy. – Source

The sites doesn’t even really call their services debt settlement. They call it Forensic Mitigation.

Our results speak for themselves. – Source

You have to laugh at their transparency page. There’s nothing on it! – Source

According to the State Bar of California, Thomas A. Moore, is an active member but has his office address at a different location. They state his office is actually located at:

Of the law firms Moore is associated with, they appear to be debt relief companies. 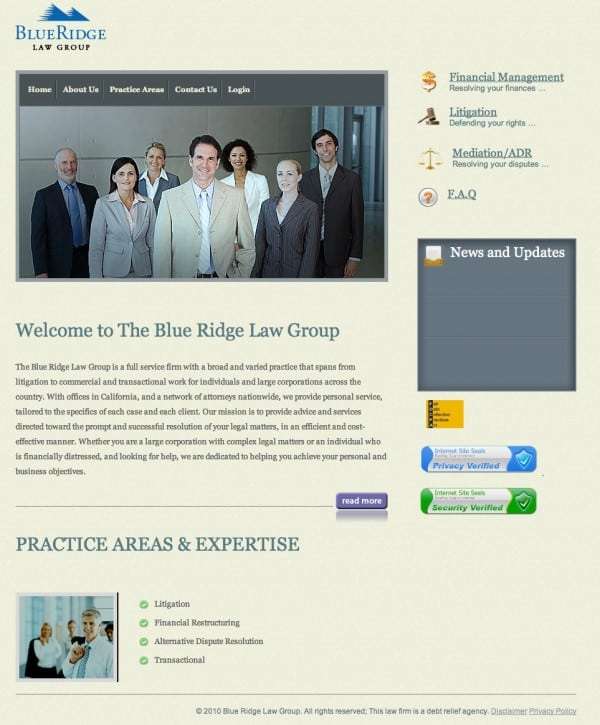 The class action lawsuit alleges that the Defendants employees people as debt analysts who were improperly compensated. – Source

Consumer Affairs Processing Center is not properly identified in the form sent to the consumer but I believe it may be the company that is incorporated in Wyoming and operating in California.

The Wyoming filings say they used to be Consumer Affairs Legal Center, Inc. but changed their name to Consumer Affairs Processing Center, Inc with its principal office located in California. The president of the company is listed as Dale Steven Weikel. – Source

And it appears that Thomas Lynch had a previous relationship with Legal Helpers Debt Resolution. Lynch was associated with Lynch Financial Solutions that was a part owner of Legal Service Support Group, LLC, a Nevada corporation, with JEM Group, and Century Mitigations. – Source, Source

It appears that sometime between January 2011 and now the membership of LSSG was changed to Century Mitigations, Fast Track, Fusion Client Services, and JEM Group. – Source. Lucky for Lynch. For Me, It Doesn’t Add Up

While there may be some plausible and reasonable innocent explanations I’m left with a number of concerns.

My spider senses are up on this one. It just doesn’t feel right.

And if I was a backend company that had all of my Legal Helpers Debt Resolution clients terminated from me and given to this firm, frankly, I’d be really pissed off right now. How is this better for the consumer?

If anyone has any information about any of the players in this article, please post your comments below.